World’s tenkara authority in the Catskills

This weekend, the world’s foremost authority on tenkara fishing, Dr. Hisao Ishigaki, came to the Catskills and gave a fascinating presentation at the Catskills Fly-Fishing Center and Museum (CFFCM). Dr. Ishigaki gave a thorough lecture on tenkara’s history and technique and a fly-tying demonstration that taught something unique to even the most experienced fly-tiers. He also gave an on-stream demonstration that awed close to 50 participants, including one of the most recognized names of fly-casting, Joan Wulff. 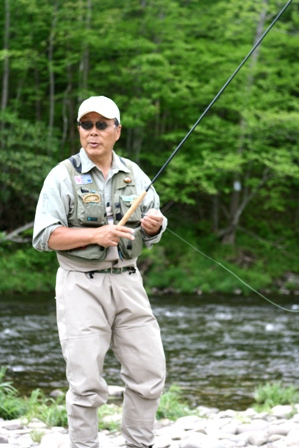 Dr. Ishigaki in the Catskills

Dr. Ishigaki is the most recognized name in tenkara fishing in Japan. He is the author of 5 books on tenkara and numerous articles for Japanese fishing magazines. He also advises a major internationally recognized Japanese tackle manufacturer on the design of its tenkara rods. Dr. Ishigaki is a professor at the Aichi Institute of Technology, in Japan, and tenkara fishing is a great passion of his, from which he makes no money.

East meets West in fly-fishing
Saturday’s event was a day when “East met West”, as participants witnessed the meeting of two giants in the world of fly-fishing, Dr. Ishigaki and Ms. Joan Wulff. Joan Wulff, one of the most recognized names in Western fly-fishing, tried her hand at casting with a tenkara rod, showing at once that tenkara fishing is no “cane-pole fishing”. She quickly adjusted to casting with a tenkara rod and formed a nice and tight loop, turning the line and fly over. 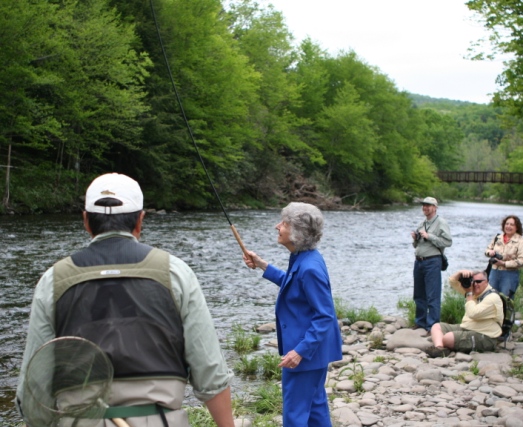 Joan Wulff getting a lesson in tenkara casting

One fly pattern
Before his presentation and on-stream demonstration, Dr. Ishigaki gave a fly-tying demonstration that mesmerized people for its simplicity and pragmatic approach. For many years, Dr. Ishigaki has only been using ONE fly pattern, a very simple traditional tenkara pattern with sparse hackle. Some of the participants could not grasp the concept of only using one pattern for all situations.

As Dr. Ishigaki tells the story, many years ago, he too was concerned with fly patterns and matching the hatch, until he walked into a store and saw an extremelly simple tenkara pattern. He tried it and caught as many fish by using only this one pattern as he ever has. He used it again, and continued catching as many fish. Then, he was given a white fly that he thought would never catch fish, and was hesitant to even tie it on, but on one occasion was forced to use it as he had no more flies left; again, he caught as many fish with it as he ever had.

He formed the hypothesis that it did not matter what shape, color or perhaps even what size the fly was. Then, he conducted scientific studies to prove that, and he concluded that fish’s vision is relatively poor and their instinct will make them go for anything moving underwater. It should be noted that Dr. Ishigaki is a leading specialist in the field of “Visual Training”, which is used regularly by different groups of individuals, including professional athletes, and he used that to study the vision of fish, particularly mountain trout. Ever since then, he’s been tying one fly pattern, which takes seconds to tie, and many times is tied using only black thread from a $1 store, and some rooster hackle. 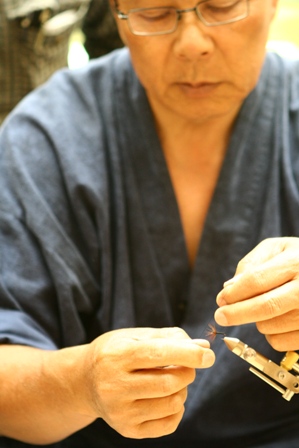 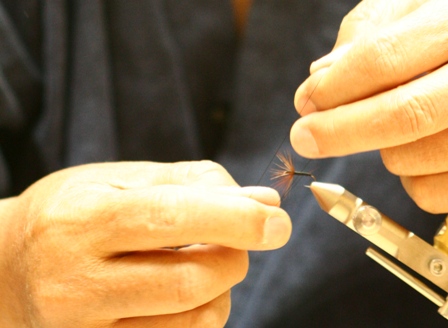 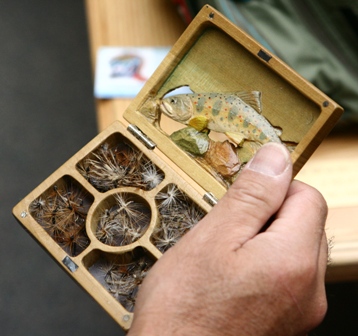 Fishing with Tenkara USA
Daniel W. Galhardo, founder of Tenkara USA, got a chance to spend a considerable amount of time with Dr. Ishigaki over the weekend, soon taking the liberty of calling him “tenkara no oto-san” (tenkara father), and being called “tenkara no musuko” (tenkara son).

On Friday, the day before the event,  Daniel and Dr. Ishigaki discussed the design of tenkara rods and the beginnings of tenkara in the US. Dr. Ishigaki also carefully reviewed each of the rods we offer or plan to offer in the near future, giving them very high-praise for their action and high quality. This did not surprise us, but was indeed a real honor coming from someone of his caliber. 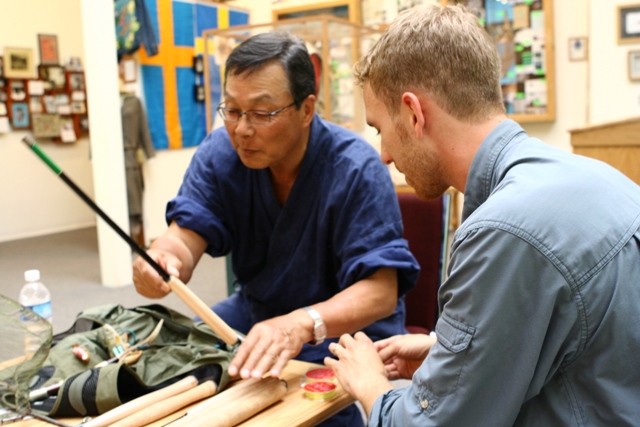 On Sunday we spent time fishing with, filming and interviewing Dr. Ishigaki, Ms. Misako Ishimura, the organizer of the event and the exhibit at the CFFCM on fly-fishing “Made in Japan”, and Mr. Chris Stewart, one of the earliest adopters of tenkara fishing in the USA, who is from New York and was also present for the weekend’s event. We also got a unique chance to see Dr. Ishigaki fishing very tight streams with his 15ft. rod, and saw him skillfully fighting and landing trout 16 – 18 inches, while using 30ft of level line.

After filming and lunch, Daniel and his wife Margaret went fishing with Dr. Ishigaki. They found a small stream with moss-covered boulders and small pools, which made Dr. Ishigaki feel right at home for its similarities to streams in Japan. There were mayflies and small yellow stoneflies hatching, but they sticked to the simple tenkara motto of simplicity and never tied anything on but a simple tenkara fly, the only fly pattern Dr. Ishigaki ever uses. They fished the stream until past sunset with the master of tenkara fishing, and are extremely honored to have had the opportunity.

*Note: The presentation on tenkara fishing was sponsored and organized by the Catskills Fly Fishing Center and Museum, not by Tenkara USA. We’d like to thank Ms. Misako Ishimura  for organizing the event and serving as the translator.

One Response to World’s tenkara authority in the Catskills