Winter Fly-Fishing for Rainbows on the Urban Landscape

February 7th, 2021. It had been one year to the day that I stood downstream of the rusty, graffiti-tagged rail bridge on the Touchet River in Dayton, WA. The afternoon offered a gorgeous mix of bluebird and cloud-dappled skies, intermittently pummeling the earth with pea-sized graupel. A soft flip of the wrist landed a hare’s ear nymph with a copper John dropper into a flow seam under the bridge, offering potential to hook into a colorful rainbow trout or steelhead at any moment.

The year prior, I stood shoulder-to-shoulder with dozens of city and county residents, mostly strangers, pitching sandbags along the levees in an attempt to hold the river in its quickly vanishing channel. Those that could, pitched in, while those that couldn’t, watched hopefully as volunteers engaged in the fight against the rising waters of an epic flood.

Turbid waves slapped the side of the steel bridge, threatening to pass by any means necessary. A thunderous booming struck worry in those of us downstream as we gazed, assuming the bridge was giving way. Moments later, a steel drum the size of a pickup truck erupted from beneath the bridge and bobbed downstream on a crash course with the next inanimate object that dare stand in its way. 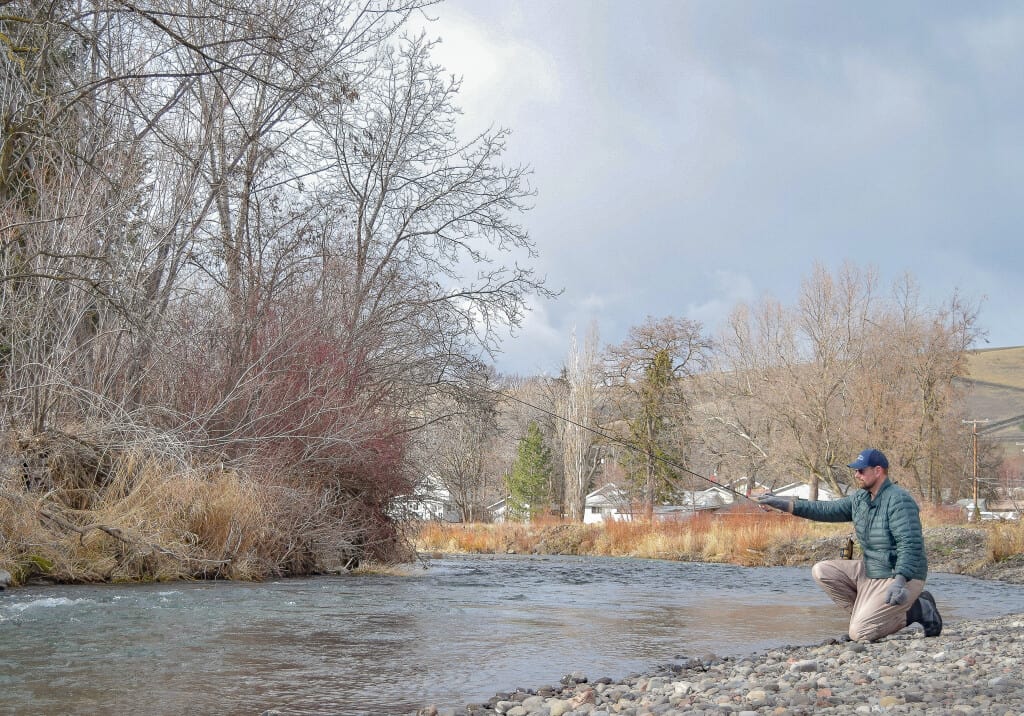 Luckily, this day was different. While many homes were damaged by the flood, the raging waters gouged new and deeper runs and dislodged and deposited riprap and woody debris, transforming the urban reach into something with greater semblance of a trout stream. Every feature placed and scoured by the undeniable force of nature, stood prominent as the presently skinny water jogged its way between the levees, back and forth like an old-school game of Pong. A welcomed scenario for a winter afternoon, high-sticking imitation trout food. 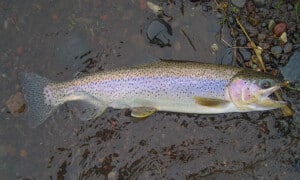 It’s an unnatural feeling, standing in someone’s backyard, eyeballing Main Street while casting a fly to lethargic rainbows. An even odder feeling when the leader stops dead and your mind races to conclude that it just might be a two-foot length of ocean-run steel on the other end. A characteristic of Columbia River Basin streams which I may never fully become accustom.

More often than not, the nymph finds its way into the crotch of a submerged willow limb or the crevasse between an errant riprap mass. Other times, the lazy, deliberate head-throbs of a trout holding in 35-degree water begin tugging back. While depths of only two or three feet are common in low-flow conditions, keeping flies down can still pose a challenge.

Pitching trailing flies is a routine technique, but the Euro-nymphing method of a heavier “point fly” for weight with a free-floating nymph or kebari tied 12- to 20-inches up the tippet is a solid choice for snowy weather trout. Winter tenkara fishing requires keeping flies down with a clean drift, and putting 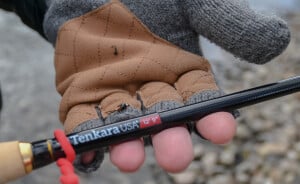 them in the sweet spot as fish are unlikely to move very far for a snack. Utilizing the length of the Tenkara USA Sato allowed superb reach and fly placement.

Winter fly-fishing has a way of monumentalizing the single fish or random good day. A single catch wipes away cabin fever, suppressing our “better judgement” to view the frosty world from our fireplace hearth. The needle-sharp sting of sensation returning to frozen fingers, ears and toes as you recall the day’s events, simply etch the memories deeper into your bank of best days.

While steelhead remained elusive, my long-lost love of winter fly-fishing was reinvigorated. “Same time next week?” I muttered to the old steel bridge as I shuffled past to the truck. Next week, indeed.

Author Bio: Brad Trumbo is a biologist and outdoor writer located in southeast Washington State where he and his wife work their small homestead with their pack of Llewellin setters.

Photo Credits: All photos by Brad Trumbo except Sato in hand photo by Marvin Shutters

« 2020 Retrospective: Tenkara in the Present Countdown to Spring Tenkara Fishing »