Why the Reverse Hackle on Tenkara Flies?

While not all tenkara flies have the hackle facing forward (away from the bend of the hook / “reverse”), the most popular and most easily recognizable tenkara flies do. These are called the “sakasa kebari”, or “reverse [hackle] flies”. As a result that’s a question often asked: What is the reasoning behind the reverse hackle on tenkara flies?

There are three main theories for why tenkara flies came into being (as well as why some of the flies used in the Italian method of fishing called Pesca Alla Valsesiana turned out to be tied in similar fashion).

1) Speed: Tying flies with the hackle facing forward, away from the bend of the hook, may be one of the quickest ways to do it. You simply wind some thread on the head, wind it back a bit, secure a feather and wind it, brush the feather forward, then build the body of the fly with the thread and finish the fly on the body of the fly where there is a lot of room to do so. This would have especially been important before vises came about.

3) Motion For the most part western flies have been designed with aesthetic imitation, not motion, in mind. Perhaps because it is very difficult to impart motion to a fly that is very far away or tied to the end of a very heavy line or a line that has to go through guides of a rod. Tenkara on the other hand was developed to be fished with lighter lines, normally closer range, and with the line tied right to the tip of the rod. These characteristics allowed for the fly to respond to any movement imparted on the rod. Whether the reverse hackle flies were deliberately “invented” that way because or motion or not we will never know. What I do know is that this is probably one of my favorite reasons for the reverse hackle. When I want to, and if the situation calls for it, I can pulse my fly. I can impart motion to it. When I pull it a bit, the hackle opens, when I relax it it closes. When tenkara flies are imparted with motion they are very buggy and lively. This is one of my favorite reasons for tenkara flies, and the fact that they are quick to tie, retain some body when in the water, and are very versatile as I can fish them on the surface by keeping line off the water or under by allowing it to sink a bit.

Stay tuned for an upcoming video on different techniques for tenkara. 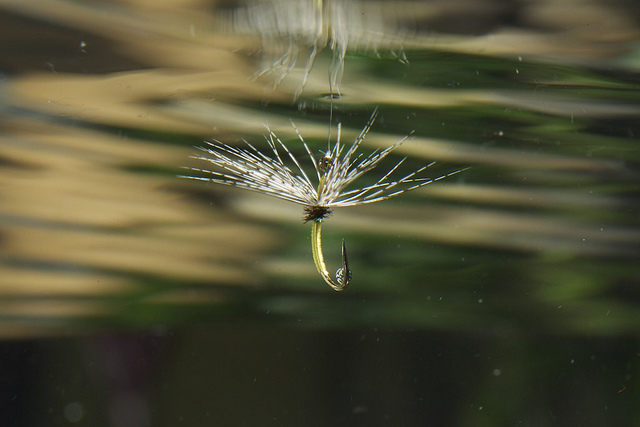 2 Responses to Why the Reverse Hackle on Tenkara Flies?