Last year I was honored to be featured in the Japanese magazine Fishing Cafe alongside some of the great names in tenkara in Japan. Among these names is Yuzo Sebata, who’s been featured in almost all Japanese magazines that discussed tenkara. I would see pictures of him wearing crampons while fishing from steep sloping cliffs, casting his simple fly into saphire-colored waters for Yamame, hoping to join him one day. Dr. Ishigaki told me he was in his 70s, and was frequently fishing some of the most inaccessible places in Japan. 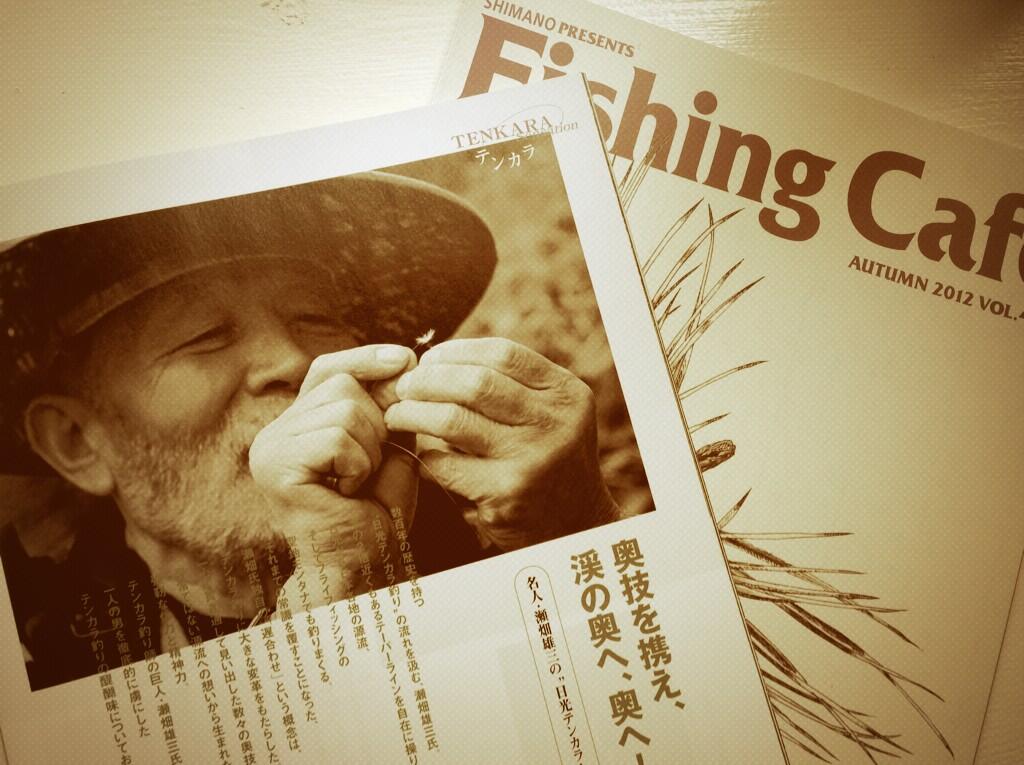 I have not yet had the fortune of meeting him in person. Two years ago, when I spent a couple of months in Japan I was supposed to meet him. But Sebata-san, who is from the Fukushima region, was volunteering in the recovery efforts after the devastating tsunami, earthquake and nuclear disaster that affected his hometown. I admired him for that.

In about a month I’ll be returning to Japan once again. As with my yearly trips over the last 4 years, I intend to learn more from the long-time practitioners of the method (yes, I do still feel there is a lot to learn). I’m supposed to spend 4 days camping, climbing, rappeling and fishing with Sebata-san, who is now researching places where he can take me that won’t have many of the huge and venomous Japanese giant hornets common at that time of year. In the meantime, I figured I should do a little more research on him, so I asked my friend Akira to translate the article he wrote for Fishing Cafe. I learned that besides tenkara, Sebata-san is very interested in foraging for wild edibles. In fact, I heard that about 3 years ago he got lost in the mountains. He spent an entire week lost in the mountains but surviving with his skills at picking wild vegetables and catching fish. His family and friends were worried about him because of his age, but after a week he appeared in a town, with no idea where he was, and hitched a ride and go back home. Hope you enjoy the reading.

My fly-fishing style is generally called “Nikko Tenkara”. Tenkara fishing around this area has a long history and it’s been passed from generation to generation for couple hundred years. The Gorocho fly is famous in Nikko, But the “fly” being used in Nikko tenkara is different from “Gorocho fly”. The meaning of “Gorocho” is “long beard caddisflies” (Latin name: Stenopsyche marmorata). The fly which imitates the “long beard caddisflies” is called the Gorocho fly. People who do tenkara around here keep chicken varieties as pets so that they can get feathers from them to make flies, but they are different from the Gorocho fly.

An Incident of “Delayed Timing”

I started tenkara fishing about 50 years ago. The reason I started is that my friend from Tochigi prefecture, Isamu Tanaka’s grandfather, Juntaro Tanaka was a master of tenkara fishing. When I stayed with my friend, Isamu-chan, his grandfather, Juntaro told me “If you catch 5 fish, you won’t be able to stop fishing, so why don’t you try it?” His explanation of fishing was very abstract. It was, “Just throw the fly in the river, play it in with good timing, and then you can catch a fish,” so I didn’t really understand what he meant at that time. But once I started mastering some of the techniques, what he was saying was exactly right.

The night I stayed at their house, he showed me how to make flies while we are chatting about random things. I was able to understand how to make them just by watching him do it. How fishing line is made around here is that they repeat the process of dipping kite string made out of cotton in persimmon juice, and then tan it. I used to use the same process to make it, but I was not totally satisfied. So through my own trial and error, I figured out nylon twine worked the best.

Some people were using horse tail hair, but it wasn’t easy to get even in my generation. I was looking for something similar to horse tail hair, and I found nylon. In fishing magazines in those days, they were showing how to connect horse tail hair to make a taper line. Since this taper line has heavy knots, there is a benefit of being able to throw the line in, but it didn’t look good. I myself wanted to make smoother fishing line, and when I finally succeeded, I had to shout “I did it!” My journey to making perfect fishing line was completed before mastering my fishing skills.

At that time, the line didn’t go so far and the fly landed on the water while the line was still slack and floated on the water. That Yamame appeared where the line was slack and floating on the water, and the Yamame bit it and tried to take it away. As a result, I was not able to quickly adjust the timing of pulling up, but rather it became a “slow adjustment”. That made me realize “Ah ha, I need to slow down by one breath. This is the secret of tenkara fishing”.

The power of life I got while fishing at the headwaters

The time I started to go the headwaters of streams was around the time I learned how to make flies. I have hiked a lot since I was young, and I had confidence in my physical strength. My motivation was that I would be able to catch lots of fish if I got to the headwaters where nobody else goes. I just wanted to catch a lot of fish and catch big ones; it was “fishing greed”. I looked at the map and decided to go over the mountains on my own two feet. Once I gained more confidence in doing this, I started going to the next valley and deeper into the forest. As soon as I heard someone say, “If you go deep into that forest, you will be able to find Iwana (Char).”, I immediately looked at maps to find out more about that place.

To tell you honestly, I went some places where I would have been dead if I was not careful enough. I have experienced slipping off of cliffs, and lost my sense of direction and was about to be completely lost several times. When we fall into those kind of emergency situations, whether we live or die depends on the “destiny of your own life,” NOT “fate”. Fate is something decided by God, but I think destiny of your own life can be controlled by your own effort. When I have narrow escapes, I believe “this is not my fate; my own life power must be much stronger”.

When I just learned tenkara fishing, I always wanted to go farther and farther, which expanded the area where I could go. Once I could expand the area I could go, my skills of going to the upper valleys and living in the mountains improved. I am able to set a camp fire in the rain and I can cook rice very well over it.

By going through hard situations, you will be able to strengthen your physical and mental states. This is like improving our driving skills. Veteran drivers avoid dangers by realizing potential dangers in advance. If the road is slippery, then the driver slows down. If the driver starts to feel sleepy, then the driver takes a break. That is how avoid potential dangers. I believe being able to act on that kind of common sense is the power of living.

If I fall off of a steep cliff, I would die, too. Being able to judge whether I can climb up the cliff with my own ability or not, that is very important. If I judge this is something I can do, I will keep moving forward with courage. If you aren’t sure or hesitate, you will fall off from the cliff.

Fish teach me how to fish.

Going to the headwaters of a stream in a deep forest. My surroundings getting dark after the sun sets. Feeling sleepy while watching the camp fire. Waking up early in the next day. Getting up before dawn and making a camp fire and seeing my surrounding slowly get brighter. I really like these feelings. Tenkara fishing is very simple, which makes me feel I am a part of the mountains. If you want to submerge yourself deep in nature, it is the best fishing style. But just through the act of fishing, we won’t be able to enjoy real thrill and joy of tenkara fishing. Fishing becomes much more fun by experiencing the joy of being able to be a part of nature and learning something new in nature. I have been fishing for a long time so that I will be to master that kind of style of fishing.