This weekend we participated at the Wasatch Fly Fishing and Fly Tying Expo. It was very much a last minute decision to attend. The Tenkara Guides of Utah were participating, as was Craig Mathews from Blue Ribbon Flies (one of our dealers and very passionate tenkara angler). Also, Utah is one of the states with most potential for tenkara, with lots and lots of streams in the mountains nearby but where, by perusing the main online forum for fly-fishing in Utah, it seems like many people have the wrong ideas about the method. Thus I decided to come in and help tenkara take over the show. It turned out that we did make a big splash, and introduced tenkara to hundreds of people and “converted” a good number of them. It was hard to look at our corner and not see a crowd. Several people commented that we were keeping people in that area for too long. So, tenkara has now made big strides in Utah.

A big thanks to Josh Leavitt of Rutalocura.com and Holga photographer Brian Schiele who helped at the booth. 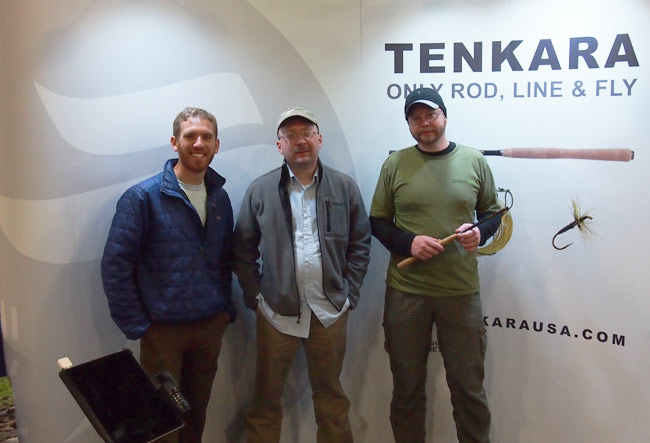 Also, a huge thanks to John and Rob of tenkaraguides.com for their enthusiastic participation at the show. Having their booth next to ours provided huge synergy.

It was also great seeing many advocates stopping by and talking tenkara to anyone who came near our booth. Several people said they came to the show specifically to see tenkara. If there is something that makes me truly happy it is to see those who adopted tenkara come to say hi and then hang out talking to everyone about their newfound passion.

The day before the show John and I went fishing at one of the Cottonwood canyon streams. We only had a bit over an hour of fishing time and I landed a beautiful brown trout. Using an ishigaki kebari of course. We fished a small stretch without a bite. The temperature the day before had swung dramatically: t-shirt and shorts weather when I arrived, but a nano-puff jacket and gloves when we went fishing the day after. Caught it by casting upstream and getting my fly to sink a few inches on a small plunge. 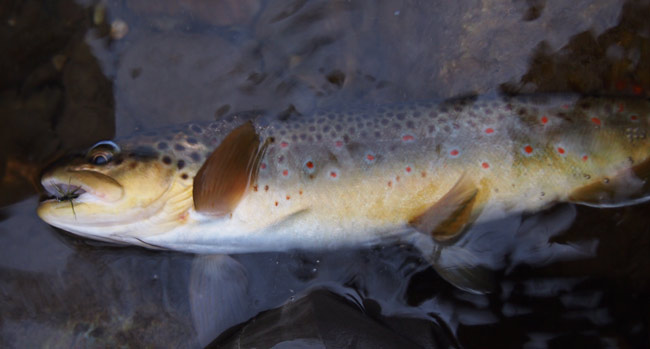 In a couple of hours we’re heading to a new-to-me stream outside of Salt Lake City, and I’m truly excited to see what that holds. The tenkaraguides.com couldn’t stop talking about it last night. I think they know something most people here don’t.