Early this week I looked at my calendar and Wednesday was a free day – I have been busier on this trip than I had ever imagined. So, I decided to revisit the tamo shops a couple of hours away from here. This was my third visit. I actually had to return before I leave to pick up a couple of pre-ordered mesh bags for my nets. But, mostly I was excited to look at all the nets I could before the end of my trip.

On the drive over, I noticed the same mountains I had seen when driving with Chris a couple of weeks ago. This time I found a better viewing spot and was able to setup my tripod for a more stable shot and some video. 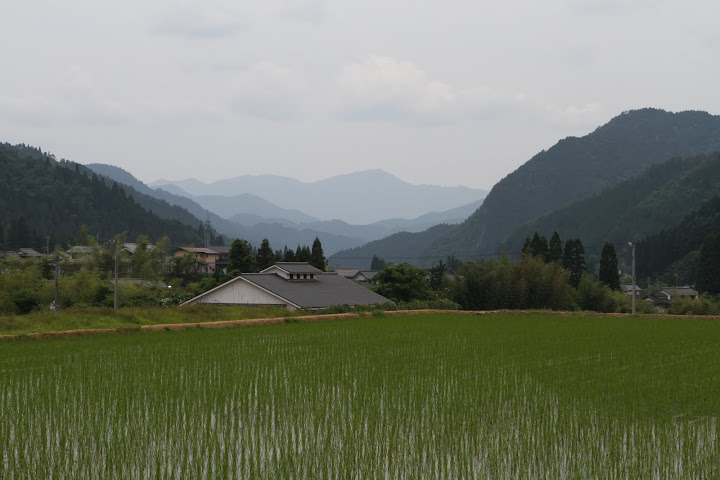 Last year Dr. Ishigaki took me to visit one of the stores, where I fell in love with tenkara nets. Then, a few weeks ago Eiji Yamakawa and his friends came to this area, but as it was raining very heavily on our second day they decided to visit the tackle shops instead of going fishing, I tackled along. This time I wanted to go on my own. I wanted to take my time in observing the style of different net makers and I wanted to talk to the owners of the stores with no rush, no time to go back, and without feeling like I’m taking someone else’s time. Furthermore, this would be excellent Japanese practice.

My Japanese is still very crude, but I’m finding that on the topic of fishing I have been holding decent conversations, being able to ask the questions I want (even if sounding like a Tarzan), and understanding most of the responses. Sometimes I still count on my iPhone, which in Japan has become an expensive dictionary, though I’m relying on that less and less. Also, I do keep a small moleskin notebook and pen with me at all times and take note of new words and refer to ones I learned before. I have had numerous hour+ long conversations here, and those have been some of the most fun (though challenging) experiences in Japan. There is something about living on the country-side, where people seem open to taking their time in conversing with a stranger, arriving at common grounds and sharing common experiences. Whereas most encounters in big cities seem dictated by a one-hour time block, here I have sat for a cup of coffee and talked with people with no pre-allocated amount of time. Sometimes conversations are quick, other times 3 hours long, nonetheless each is a big opportunity to learn about 10,000 new things. 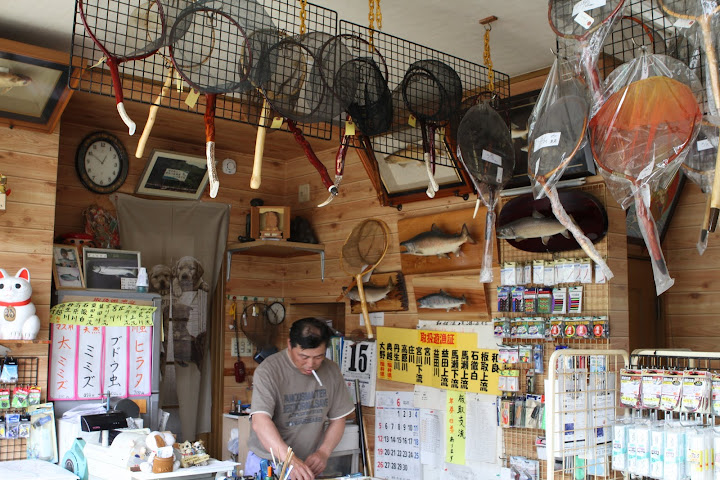 (by the way, though tenkara is mostly for smaller fish, if you still think it is only for the very small fish, take a look at the mounted fish on Shimizu’s wall, fish of that size or larger are a common decoration on walls of businesses in this area)

The first tamo shop I stopped at is owned by Shimizu-san. By far my favorite store and where I got my first net last year. A few weeks ago when we tried to stop by they were closed, so I was happy to find his store opened on this visit. Shimizu-san’s store has been around for about 40 years and was previously owned by his father. At this time of year, ayu fishing season is starting and the river across the street from his store was filled with ayu anglers (more on this later). A couple of times fishermen came in dressed in their neoprene waders to talk to Shimizu, as I admired each of the nets he had on display. This year’s collection of nets from different makers was nothing short of extraordinary. The nets were much more expensive than they had been last year, but each of the nets was of very high quality. Also, his store only stocked kaya-tree nets this year, as opposed to nets made from other trees like the “momi”. He says kaya nets are the best and he’s not carrying nets from other woods this year. He and I had a good conversation. I didn’t meet him last year, but he said his wife had mentioned meeting me last year.

Then, I revisited another store where  I had stopped a few weeks earlier. I actually had to return to the area before I left since I had pre-ordered 2 custom mesh bags from the maker. I had asked if they had any mesh bags to sell, but they didn’t, preferring instead to use the bags for their own nets. However, he agreed to prepare a couple for me and have them ready within about 10 days. So, I stopped there and picked them up for my upcoming kaya nets. Here’s a picture of the maker about 30 years ago, this picture hung on the wall: 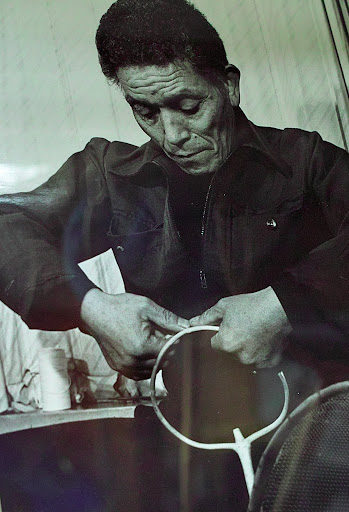 2 Responses to Visiting the tamo shops

« Remembering earthquake and tsunami victims 10,000 candles Pictures of tenkara fishing in Japan… and some Japanese terms for you »