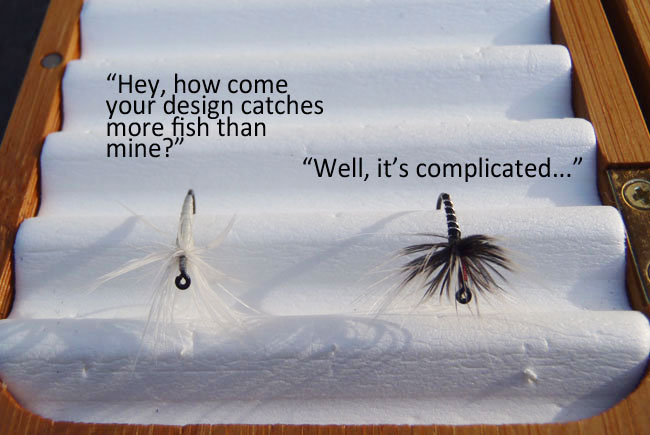 There are many variables that make an artificial fly attractive to fish: size, silhouette, movement, and color. Anyone who has seen a sakasa kebari underwater knows that they’ve got excellent, lifelike movement and this is probably the main reason they are so effective. But movement often overshadows color in sakasa kebari design.  Typically, the bodies are an afterthought and nothing more than a simple black or other muted colored thread.  While these flies work, I think we can take a lesson from the great attractor patterns like the Royal Coachman, and incorporate not just color, but contrast into sakasa kebari to make them even more effective.

Let’s dissect the Royal Coachman for a moment.  The most obvious feature of this fly is the red band which many people would identify as its attractor quality (color). But looking deeper, you will notice that the fly also has another great visual attractor: contrast. Of course the red band contrasts against the peacock herl body but look at the wing.  The white wing against the peacock creates the most dramatic contrast of all:  black against white.  And all three colors together create even more contrast. I think it’s not merely the red band that is the key to the Royal Coachman’s fish catching ability, but rather the interplay of contrast between dramatic colors.

So why does it work?  After all a Royal Coachman doesn’t even vaguely resemble anything in the underwater world. But maybe that is exactly why it works.

Stream trout are constantly being bombarded with a barrage of flotsam–twigs, pebbles, larval shucks, vegetation, and insects. The fish only have a split second to identify something as food or not.  One of the things that helps them make that decision is complexity.

Let’s face it, bugs are intricate little creatures.  They don’t look like a lump of seaweed.  They have legs, antennae, gills, segments, wing cases, and tails.  Trout don’t want to waste energy taste testing something to figure out if it’s a twig or a caddis larva and the most efficient way to do that is to visually ID something before they decide to go after it.  The more something stands out as “not a twig”, or “not a leaf”, the more easily identifiable it is as food (i.e. a complicated looking insect).  Complexity helps trout decide if they’re going to end up with a meal or a mouth full of algae.

So that’s the reason flies with great contrast work even if they don’t resemble anything in nature. They’re quickly identifiable as food because their complexity makes them stand out from the other flotsam drifting toward them.

So how can we incorporate this concept into the designs of our sakasa kebari?  After all, they’re so simple–just hackle and thread. The answer is material choice.  Here are some ideas to create the illusion of complexity without compromising the intrinsic simplicity of sakasa kebari. 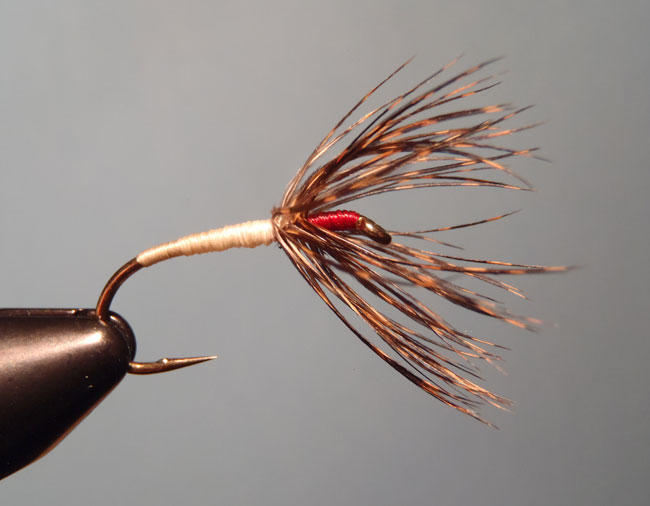 2.  Add ribbing. A simple copper wire ribbing instantly transforms a bland thread body into a  more complex, segmented insect body. It also adds a little weight to the fly to help it sink. 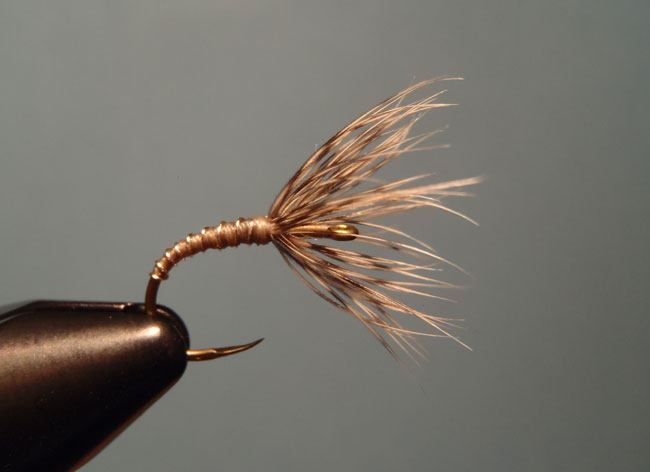 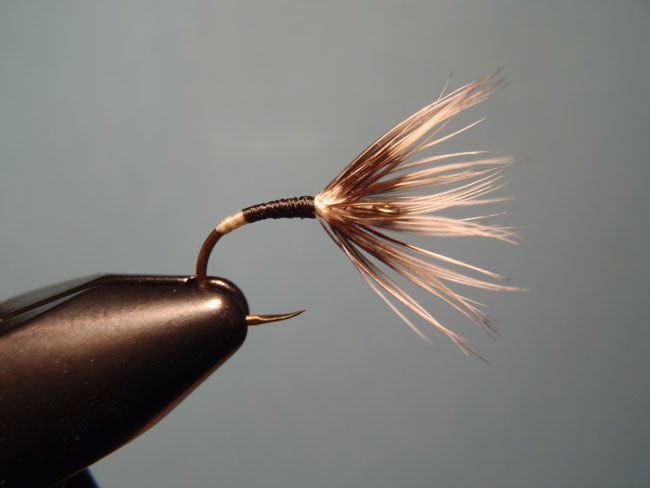 A simple thread tag can be enough to add contrast 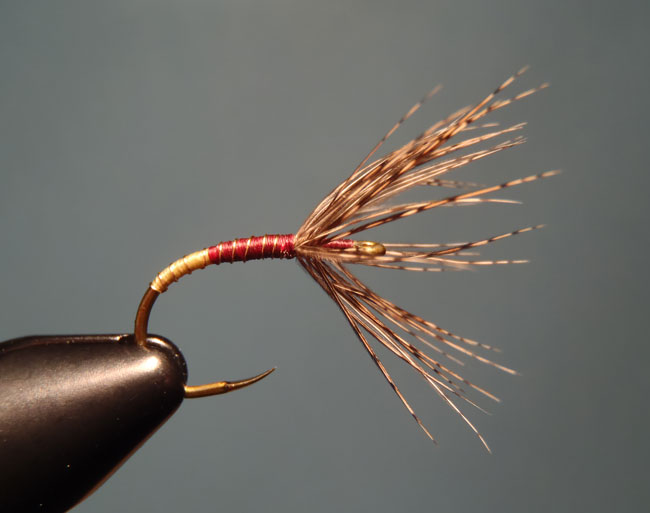 A "half & half" claret and yellow sakasa kebari 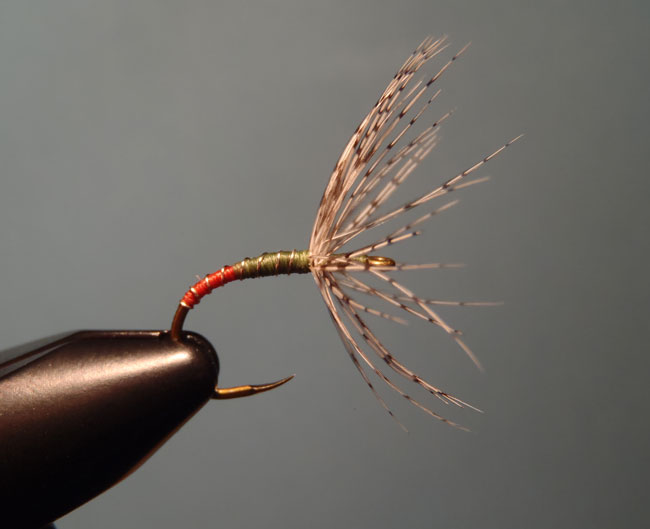 A "half & half" olive and orange sakasa kebari 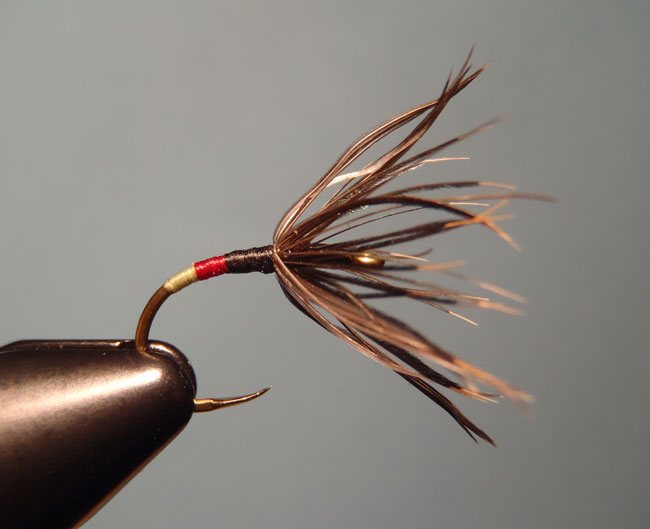 Proof you can do a lot with just thread and hackle!

4. Use colored loop eyes.  For loop eye flies, choose a material that’s a different color than the body of the fly.  White, red, or yellow all create good contrast and create the illusion of more complexity when they peek through the hackle fibers. 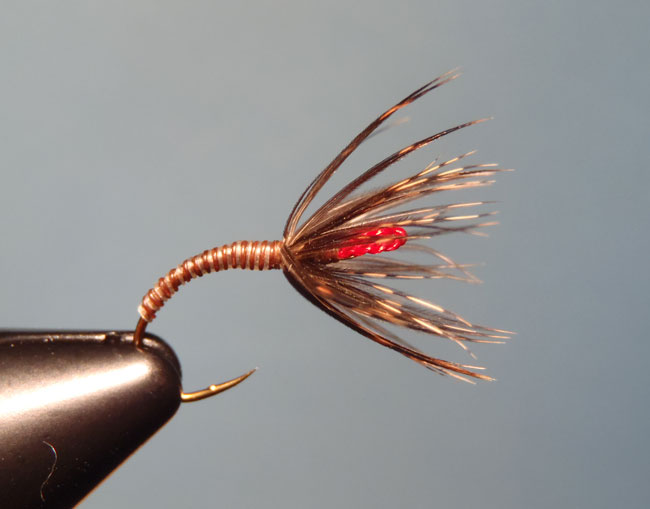 Hopefully, now that conversation between the two kebari in the fly box at the beginning of this post makes sense now.  Achieving complexity is simple.  Just by choosing the right materials, we can add the visual complexity trout rely on to identify food without tying overly complicated patterns.  Sakasa kebari already have the dance steps down.  There’s no reason they can’t look the part too.

What design elements have you added to your flies to make them better attractors?