“Trout Hangouts” is an ongoing series in which I highlight one specific element or structure of a river, stream, creek, or lake where trout like to hold and talk about how to approach it. Many fly fishers might know how to fish, but not necessarily where to fish. By dissecting the complicated infrastructures of different types of waters into more focused, manageable pieces, any angler can learn how to read the water and figure out exactly where to cast and apply their skills. 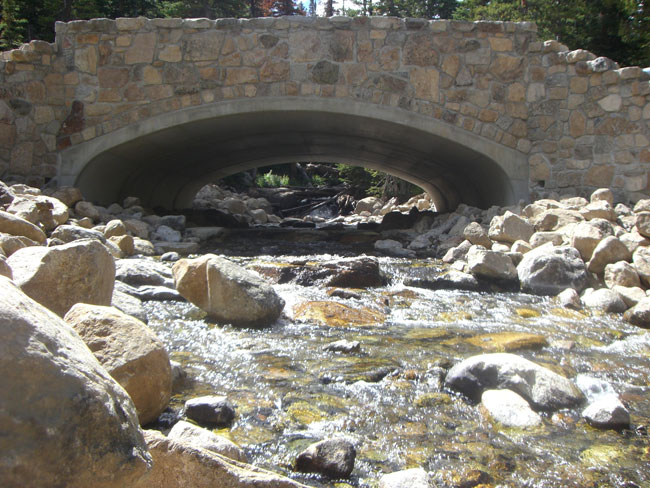 Bridges are curious things. For trout, they can either be safe havens or danger zones and a lot really depends on something pretty far removed from a piscatorial perspective.

If you’ve fly fished for any length of time, you’ve probably waded up to a bridge at some point and the water beneath it probably looked pretty fishy. Indeed, bridges can provide great holding water. After all, they offer impenetrable protection from predators, shade when it’s hot, and usually slow down the current enough to provide a comfortable lie. In theory, that all adds up to a perfect place for trout to hang out. But what I’ve discovered is that the design and type of bridge makes a big difference.

The bridge in the picture above is a good example of one that trout might find appealing. It’s very robust because it’s made of stone. Even if cars drive over it, there is probably minimal vibration that transmits into the water that might scare fish (or, they’re just used to it). Also, it has solid stone side walls that prevent shadows or flashes from shiny parts on cars to go into the water. So, that would be a good bridge to fish under (I happen to know because I have). But the people who built this manmade structure probably weren’t thinking about creating a trout hangout when they put this bridge up. It was just coincidence.

Now imagine a bridge made for foot traffic along a busy jogging trail or tourist hotspot. It might have been constructed out of slatted wooden boards with gaps that let light, shadows, and vibration project into the water below every time a pedestrian passes by. That’s not a great place for trout to hunker down in. Actually, with all the activity, it’s kind of scary. So even though the flow under that bridge might be prime, the constant threat of perceived “predators” from above, will make it a troutless stretch of stream and not worth fishing.

The first thing you need to determine when approaching a bridge is if it’s viable or not. If you determine it’s good structure, then you need to figure out your approach.

Unless the bridge you’re encountering is really, really big, then most likely, you’re going to be faced with the possibility of only two presentations: upstream or downstream. When fishing a traditional tenkara presentation, I usually favor a downstream presentation. It really depends on the height of the bridge. Whether it’s a short or tall bridge and you’re fishing downstream, you can probably make a normal cast, let it drift down a little, then start pulsing the fly once it’s under the bridge.

But if you’re fishing upstream, that’s a different story. Since you can’t use the flow to get your fly into position, the casting will be tighter. You can’t really do an overhand cast when you’re trying to fish in a tight tunnel so something more like a side-arm cast or slingshot cast might be the way to go (watch this video at 5:43 to see how to make the slingshot cast).

So, the next time you encounter a bridge, think about if it’s really worth fishing or not. It could be a great opportunity, or a waste of your time.

How do you approach bridges?

One Response to Trout Hangouts: Bridges

« How to Fish in Chocolate Milk: Tips for Fishing High, Muddy Rivers The practical tenkara fly »