Ishimaru Shotaro, an 89 year old tenkara angler in Japan, offered to give me some of his tenkara flies. He opened the box and out came an unexpected tenkara fly pattern. Why unexpected? For most of my fly-fishing life I had come to somewhat expect the look of a fly to improve in proportion with the time an angler had been tying it. Mr. Shotaro has been tenkara fishing for over 77 years and is the longest practitioner of the method I have met. Yet, his flies were, for lack of a better term, the sloppiest I have ever seen.

I mean absolutely no disrespect by the term sloppy here. Mr. Shotaro’s flies embody an experience that I can only hope to one day have.  At a time when tenkara anglers were not interested in teaching their craft to others, he may be one of the first people in Japan to have learned tenkara and then taught it to other people.

I should mention that he does and has caught plenty of fish on this pattern (though I’m not sure I can call it a “pattern” as none of his flies will ever, ever, look the same). On his heyday, before the damming of the rivers he fished and before most fish had been caught out of Japanese streams, Mr. Shotaro reportedly caught 130 fish in a day.

Because of his frail legs, Mr. Shotaro no longer fishes. However, I did get a chance to fish with him for a brief period of time on the day we met. We walked over to the stream next to the Mazegawa Fishing Center, where I had been spending my time. I had fished that stretch of the river many times in previous weeks with very little success. After casting his “sloppy” fly to the water a few times, Mr. Shotaro managed to get two fish to chase his fly; and I can attest that was a good number for that water.

Last week I posted the image above in our Facebook page and received a lot of comments about the fly. The people posting actually appreciated the fly. “Maybe there is genius in the “slop”?” said one poster. “Experienced tiers tie flies that fish think are foods…Buggy look is good!” and  “commercial flies are tied to attract the customer. fish don’t have any money so they can only steal them”.

The picture below, which I posted on my original blog post about Mr. Shotaro, shows his flies (left) next to some very beautiful looking flies. The pretty flies were tied by someone who had been tenkara fishing for only about 6 months. The dexterity and attention to detail in the nice-looking tenkara flies certainly betray the 76 1/2 year gap in their experience.

What at first struck me as a sloppy tenkara fly has turned to be a representation of the pragmatic simplicity of the original tenkara angler. When he gave them to me, I thought, “now, that’s interesting…” and put them in my box. The flies he gave me have been tucked away for over a year when I just decided to pull them out for a photo shoot.

Only once I stopped to look at the fly again and paid more attention, did I realize that their apparent lack of organization translates into a fly that I can not seem to replicate. Do I start at the front or the back? Do I wrap the hackle, wrap line over it and then wrap the hackle some more? This greatly intrigued me, if I couldn’t replicate that fly, maybe I just didn’t understand it.

Mr. Shotaro’s sloppy fly gained a greater appreciation at this moment.The more I look at his tenkara flies the more they strike me as the work of an abstract artist with modern impressionist, or perhaps expressionist, tendencies.

The most beautiful thing about Mr. Shotaro’s tenkara fly is that it is so widely open to interpretation. The disorganized look is neither methodical nor really sloppy.  Perhaps one day their “sloppiness” will be more deeply appreciated, like a work of art. He certainly would never think of himself this way. But, when that day comes, Mr. Shotaro may come to be perceived as the Jackson Pollock of fly-tying. 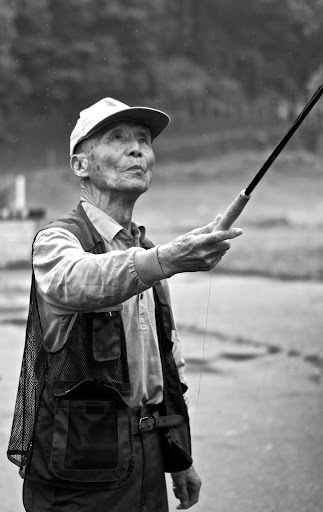 11 Responses to The practical tenkara fly