How can I possibly start writing about a fishing trip with two of the finest anglers in the US, if not by repeating an older post that I must have been living a dream? And that, if not overwhelmed, I am still trying to believe that I actually went tenkara fly-fishing in the company of such well known anglers as John Gierach and Ed Engle! These are two of the guys who most shaped recent western small-stream fly-fishing. Yes, tenkara fly-fishing with John Gierach and Ed Engle! 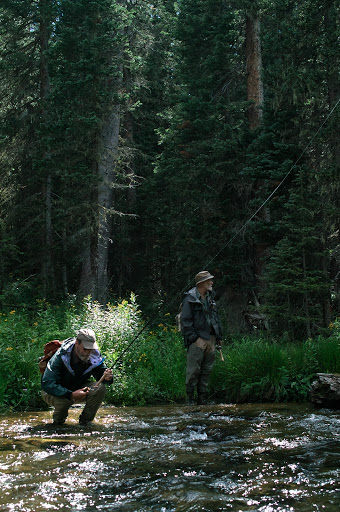 I was never too surprised that Gierach and Engle became interested in tenkara. And not that surprised that they would take up tenkara, either. I had read their work before, and knew they were small-stream anglers and pursuers of fly-fishing simplicity at their core. I also knew we shared many perspectives and ideals about the sport.  They would have to be drawn to the simplicity and effectiveness of tenkara.

Though not entirely surprising, fishing with such well known anglers as Mr. Gierach and Mr. Engle is indeed quite a privilege, and witnessing both tenkara fishing exclusively during our trip and embracing tenkara as the ideal method for stream fly-fishing, was nothing short of a spectacular. That I could present anything new to these guys is something I’m very proud of.

Gierach playing a brown trout using the Iwana rod on the St. Vrain (yes, he does seem to be reaching for the reel): 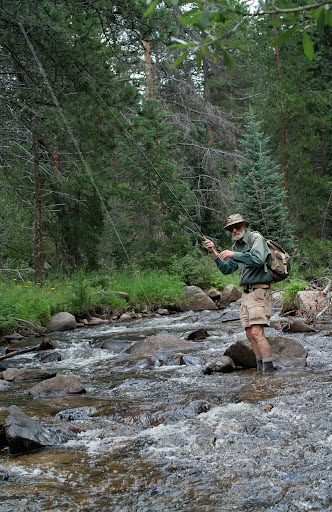 After being contacted by Gierach and communicating with him for a period of time, I finally invited myself to fish with him in his home waters near Lyons, Colorado. I figured, if Gierach writes about it, it’ll be set on stone, and thus I should share all I know about “pure tenkara” with him. It’s easy to overlook the real origins and techniques of tenkara as practiced in Japan for possible preconceived notions on tenkara, and I didn’t want that to happen. A few days before the trip, I learned we’d be joined by Gierach’s good friend, Ed Engle, whose work I also admired and whom I had contacted a bit over a year ago because of an article he wrote on fly-fishing simplicity, having as few elements between him and the trout, etc.  There you go, Ed, only a rod, line and fly between you and that trout: 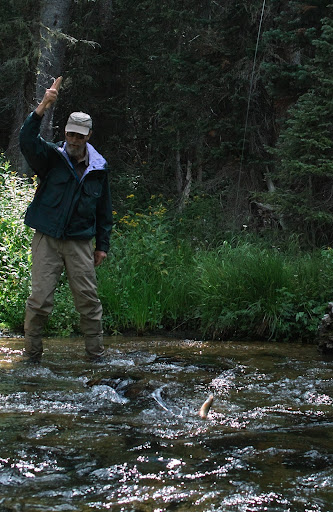 What I didn’t know until I arrived is that both Gierach and Engle have a bit more than a passing interest in Japanese culture. Both Engle and Gierach used to belong to a poetry group in their college days and were very interested in Japanese poetry, philosophy and culture. Engle had even studied Japanese and learned the Japanese brush painting technique of Sumie. Gierach has been cultivating bonsai trees for over 20 years, and had some truly striking bonsai in his living-room; in addition, Gierach also had done some very nice “Gyotaku” (the art of applying paint to a dried fish and transferring the fish’s details to paper), which now sit at the writer’s den – yes, it was cool to see where the magic happens.  Of course, the main topic of our conversations was fly-fishing, but that they had an interest in Japanese culture was cool addition. I spent two full days fishing in their company, staying at Gierach’s home. This gave us a chance to talk much, and at length about fly-fishing, tenkara’s origins and techniques and many other topics of interest; the conversations didn’t stop unless it was before the morning coffee, or for fishing. 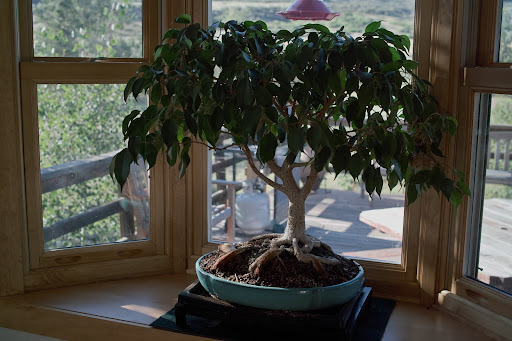 We fished a couple of different forks of the St. Vrain, Gierach’s famous home stream.  What a beautiful stream. On our first day, we headed to the South St. Vrain, hiking down a trail past a picturesque lodgepole forest, and through a mossy trail. We took our time to observe juniper bushes that could become nice bonsai and, of course, also kept our eyes open for branches that could work as tenkara nets . I brought a tenkara net along to show it to them, and I think both of them really liked the concept. Their gazes now often shifted from trail to stream to trees as they walk around. 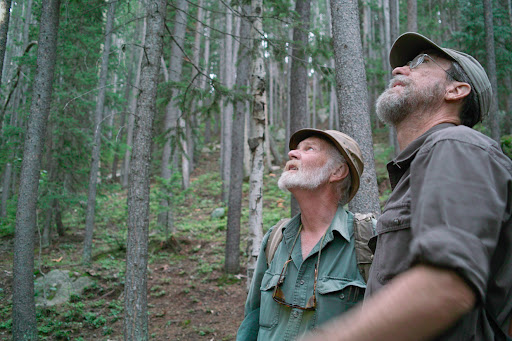 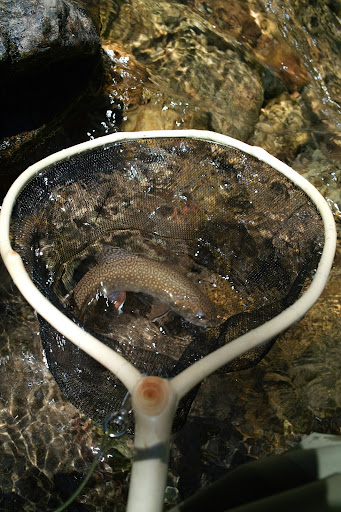 The point in the South St. Vrain where we started was pretty tight in places, making it challenging to cast, but we managed our casts and hooked some nice trout. As we fished, I tried demonstrating the main tenkara techniques: casting upstream and having a drag-free drift downstream, while keeping the line tight; casting slightly upstream, holding the fly in place for a few seconds, letting it go down about a foot and holding, repeating until the end of the drift; casting slightly downstream and pulling the fly upstream at about 1ft intervals; or simply casting upstream from the head of a pool, dropping the rod tip so the line would be dragged under, and effectivelly sinking the fly deep. The stream opened up a bit as we worked our way up the stream, and the St. Vrain became “tenkara-perfect”. 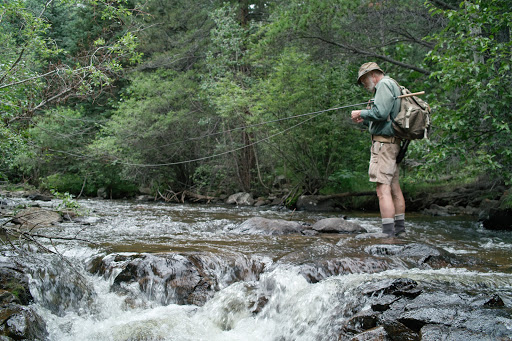 During our second day, we visited a more remote part of the St. Vrain, remote for a reason. This stretch required a serious 4-wheeler to get up there. For a bit over 4 miles Gierach skillfully navigated some treacherous terrain with large boulders one would think impassable. It was all worth it when we arrived at a lush verdant area, with a gorgeous “tenkara-perfect” stream running through it. 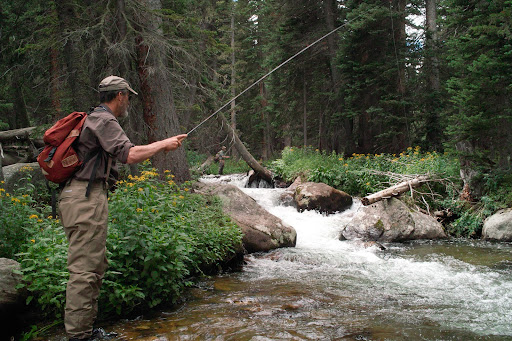 The air felt moist and smelled of pine trees, my favorite type of place. We hiked for a few minutes through tall grasses, still a little wet from the previous days’ storms, and which had been flattened by what we assumed were moose. We later confirmed this assumption by finding some moose dropping. “If you see a moose, don’t piss it off!”, I was told, as if I would purposefully do that. As we fished, going upstream, we managed a nice pace, leapfrogging each other to the next pool. I tried taking pictures in between, and every once in a while we’d reconvene, to either talk about the fishing, or to observe each other trying to fool a trout. Those were memorable moments. 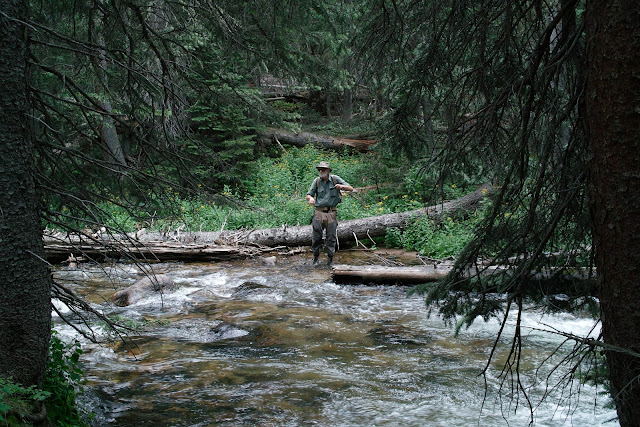 Neither of them really went for the “ one-fly” approach that I have adopted, and primarily used a two-fly rig (elk hair caddis and a dropper nymph). Nevertheless, we did very similarly in numbers of fish each of us caught (discounting for the time I focused on taking pictures instead of keeping my “one fly” in the water). I was happy to see that they didn’t bother changing flies when the fish didn’t bite, focusing instead of moving upstream to the next pool, a classic tenkara approach. 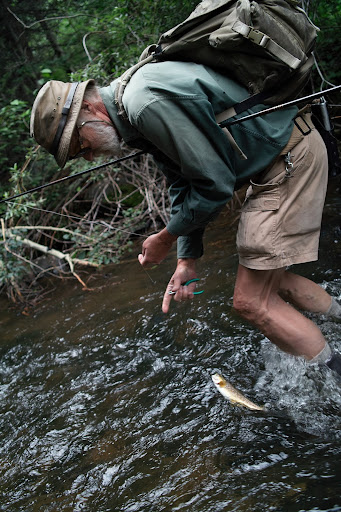 Both Gierach and Engle agreed that any one fly pattern would probably work just fine in a stream like that. And so it did. I continued using one tenkara fly only, or more accurately, any fly picked at random from my box, which probably had 3 different tenkara patterns with a few different colors.

The fly resting on the flat part of my tenkara net: 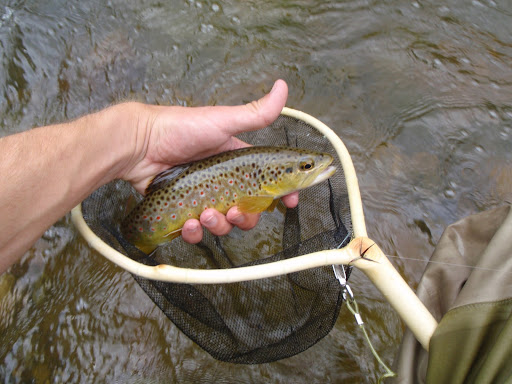 The two newest tenkara converts will probably be letting their reels rest for a while. I won’t blame them if they choose to take their cane rods to the water every now and then, but for some reason I suspect that will not happen so often going forward. 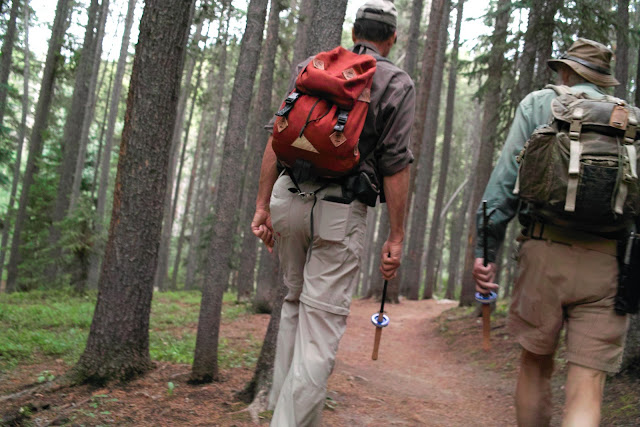 12 Responses to Tenkara with John Gierach and Ed Engle