As I settle in my hotel room for the night, I turn the TV on to relax after a long day of what others would perceive as work: introducing about 100 new people to tenkara. After a minute of surfing channels, I come across the movie “The River Why”. While I was familiar with the title and I have meant to read the book, I have never read it, and must confess I don’t know the story line is (the movie is playing as I write this post, and if the post has grammatical errors, well, forgive my distraction).

According to the program description the movie had been on for approximately an hour. And, I just so happen to turn it on right as this is happening: Gus, the main character of the movie, is showing someone a new trick. It turns out, the person he was showing the trick to caught a fish, and he was also a very famous writer. And, thus, the writer decides he wants to interview Gus, and he writes a book stating Gus is a young guy who may be the best angler he’s met in decades. As the book comes out, Gus’ business of selling tackle and flies that he ties, booms.

Why do I tell you this story? Because the coincidence, if I can call it that, was too much to ignore. For the last two days I have been fishing with the world-renowned writer, Dave Hughes! And, yes, I was teaching a few new tricks to the famous writer and angler. But, no: none of us caught a large Chinook, was forced to jump in the water, and fight a super large fish into the night as a result. So, I’m sure this post will be infinitely less entertaining than the movie. 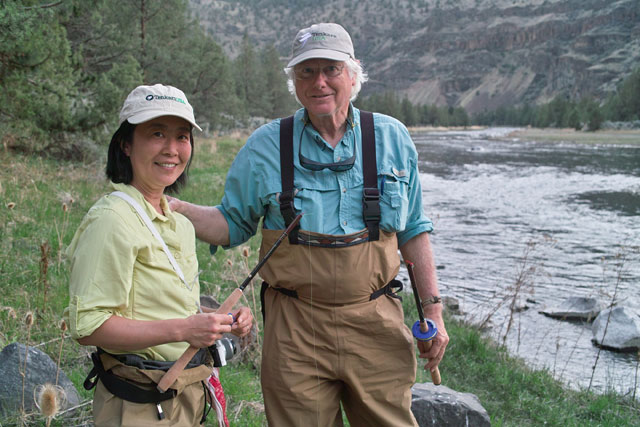 A few months ago I was invited to come speak to the Central Oregon Fly Fishers in Bend, Oregon. This is an area that I really enjoy, so the idea sounded interesting. Then, in January I attended the Fly Fishing Show in Denver, and that’s when I met Dave Hughes, a name I was very familiar with. Dave told me he lived in Portland, so the idea of coming to Oregon was now even more interesting, and so plans were made to visit and spend a week here. 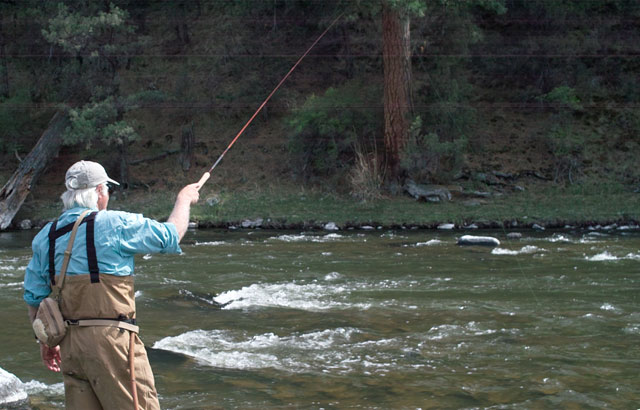 Dave has been doing tenkara for about 10 years, but felt he could learn more about tenkara. So this would be the perfect opportunity to show him a few new techniques and uses for tenkara. Since he used it exclusively in small streams, I wanted to show him how to use tenkara in larger water. We chose to meet and camp at the Crooked River, outside of Prineville, OR. The Crooked turned out to be a great choice as it provided for a variety of water types to teach new techniques, and the fish were active.
***before I forget, Yvon Chouinard, founder of Patagonia, wrote an article about tenkara for Fly Fisherman magazine (June/July issue) and he highly recommends Dave’s book Wet Flies, which is a great resource.
As the river is full of small fish, Dave suggested we keep some for dinner and cook them shioyaki-style: skewered trout, with sea-salt coating the skin and cooked over a fire. Despite our conversations about tenkara anglers not relying on matching the hatch, Dave did feel compelled to check out one of our trout’s stomach contents. And, I had some insights on why we caught fish with what we did. Though any of the tenkara flies we tried worked fine and caught a fair number of fish, it turns out the most productive fly on both days was the Oki kebari, a larger (size 8) black tenkara fly. In our trout’s stomach contents we found two main foods: super tiny midges (size 30?) and large ants. So, the fish were taking the Oki for ants. 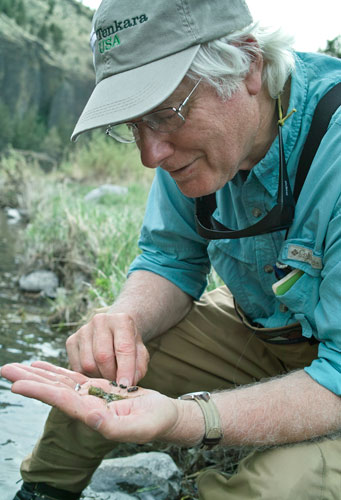 His wife, Masako, who joined us on this trip, is from Tokyo and also a well-known fly-fishing writer for Japanese magazines. During their travels to Japan he became familiar with tenkara and picked up some rods. Dave told me how he used his rods a few times in some small streams, but also broke multiple rods he acquired in Japan and was unable to fix them. He finally got our 11ft Iwana earlier this year and can thus have some peace of mind in his excursions – no broken rod yet, and with a few pointers I do not expect him to break our rod. 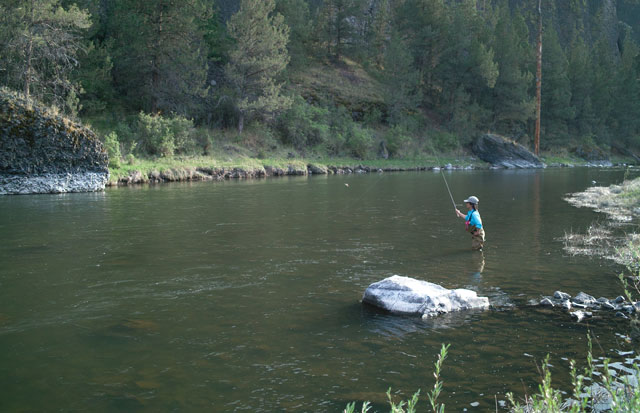 This was Masako’s first real exposure to tenkara and after some coaching she got on the groove and did very well. It was cool to watch someone experienced being exposed to tenkara for the first time. At one point I was working on a lot of techniques, and was catching a fish here and there, but thought I could get more consistent results. So, I “wasted” a bit of time trying a combination of techniques. Masako, who was fishing downstream from me, stuck with a more relaxed approach of leaving a lot of line in the water. Perhaps more of a “western” approach. As a result the fly was getting a bit deeper and she was catching fish after fish. Thus, and important lesson: much like not second-guessing fly choice, do not second-guess your technique too much. I slowed down and caught a few fish in a row. 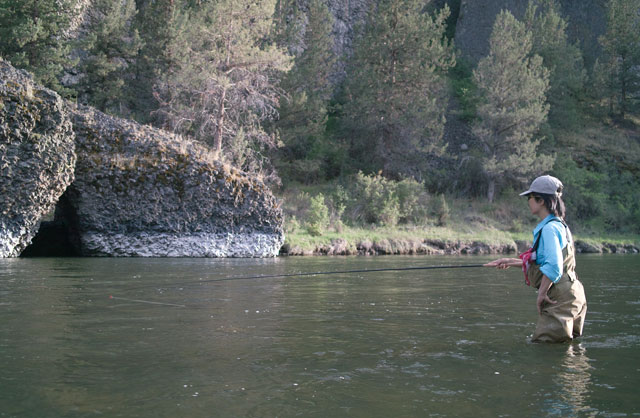 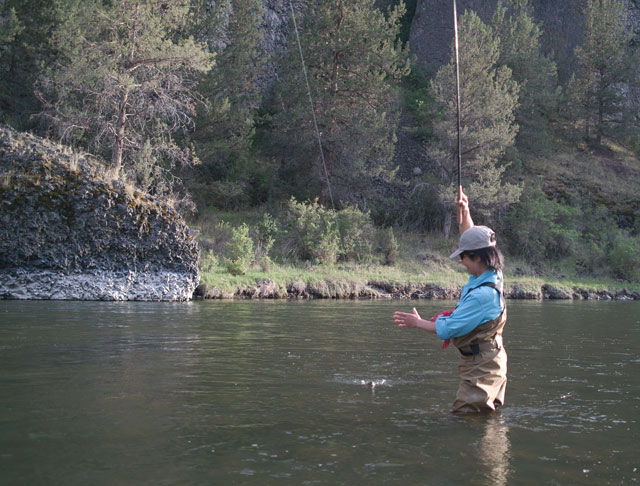 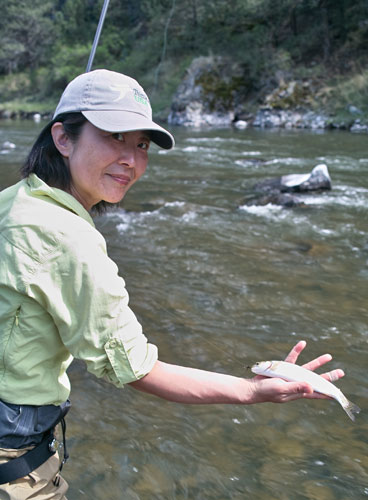 And, thus, Masako helped guarantee we had some dinner while camping. The trout were delicious, and cooking them in this way is how it should always be done. In preparation to keeping some fish, Dave had prepared a “shioyaki log” and brought along some long bamboo skewers. The shioyaki log is a piece of wood drilled in different places to support skewers over the fire. We will auction off the shioyaki log, signed by Dave, in coming weeks, so stay tuned. 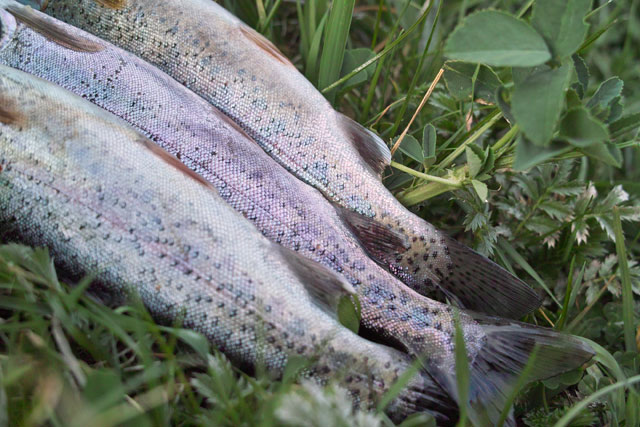 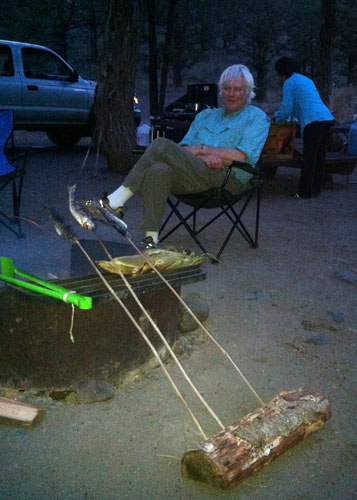 P.S.: If you have tried to reach me during the last few days, you’ll notice I haven’t responded to your email or call, and won’t be responding to it until next week. Tenkara USA is still working, so do email our general email address or call us if you need assistance. TJ, who is in charge of our super customer service, is there to help.

6 Responses to Tenkara with Dave Hughes

« How to Fish with One Fly Pattern Tenkara Techniques Tenkara Oregon »