Wow, what a show this is!

Today was the first time we held out own booth at a Fly Fishing show, and the first day at the Somerset Fly Fishing Show. It was a blast. AND BUSY! Of course, I imagine anyone who works at their own booth feels they were the busiest booth around, but I suspect we were one of the busiest, for real. I mean, no one could miss our large overhead banner from anywhere in the pavilion. Many people mentioned they saw our sign from the entrance and came by to see us. It’s really cool we were the only company featuring one of those – the show organizers suspect we just started another trend. 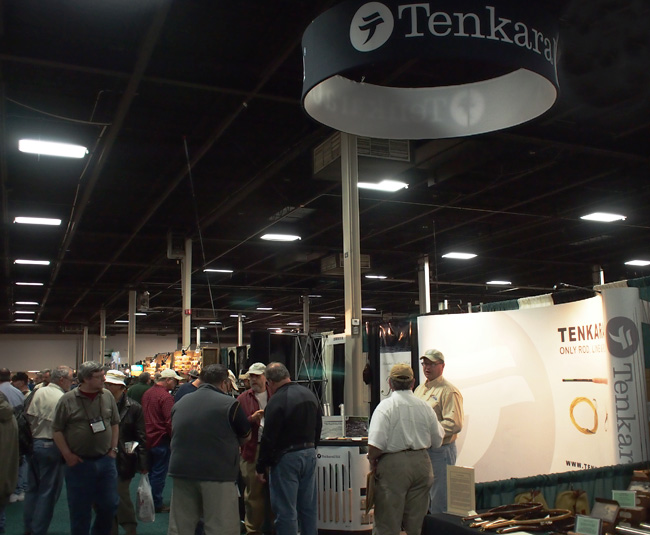 We met at lot of people that have been tenkara fishing for sometime and came by to say hello, and I really appreciate that. Especially as they may have hung around and talked to others who were interested in giving it a try – I mean, we can not get better support than those who do it and share it with others just because they love it.

Chris Stewart (Aka. the Tenkara Bum) was a great help at the show today. His enthusiasm for tenkara really showed at every interaction with our customers and he was a great help.

The day started with a presentation on tenkara at 11AM. I thought  this was going to be completely empty as many people were still trying to get in the show, but turned out to have the presence of some 20 guests or so.

Then, it ended with a great interaction with a group from Italy, the TLT Academy. There were some 5-6 guys from Italy who came to the show and had their own booth about a method of fly casting they teach. I turned out that one of their people, Mr. Massimo Pulze, has been practicing the Italian method of “tenkara”, called Pesca alla Valsesiana, since he was a young boy some 50 years ago. The methods are similar, but we also learned of some differences – such as the Italian’s preference for a very soft rod – Mr. Pulze LOVED the Ayu rod, “bella cana” he would say. I learned they prefer the softer rods for the ability to keep the line off the air by casting wider loops, and this may have derived from the fact that early on they used live bait, which would fall apart if being cast with a stiffer rod. In any case, we had a terrific interaction and I look forward to spending more time with them.