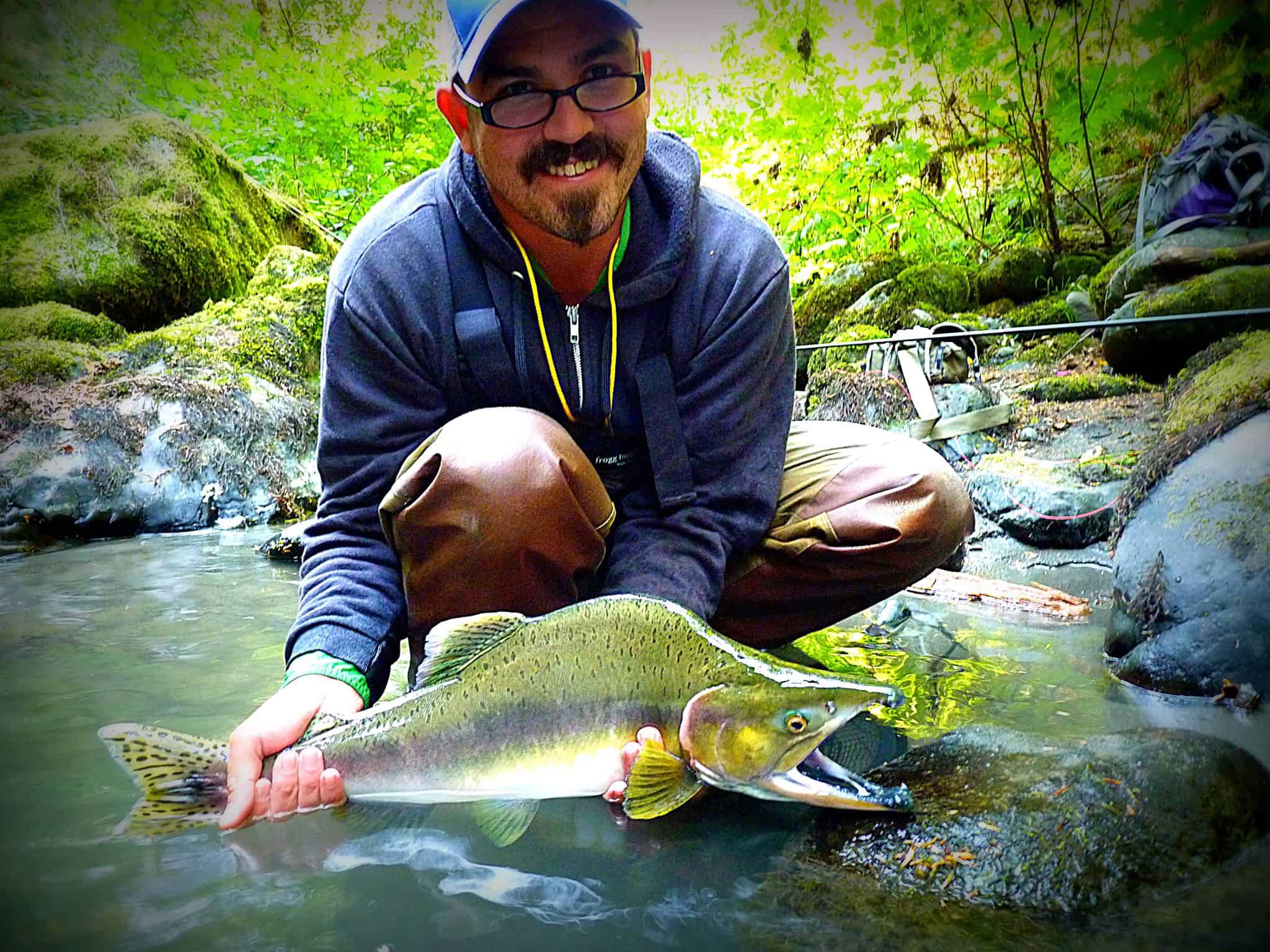 There are few places more ecologically similar to tenkara’s birthplace than the Pacific Northwest. Cascading streams abounding with trout are annually invaded by anadromous trout, char, and salmon. The Amago is a tenkara rod that provides plenty of enjoyment while catching 10″+ trout but has the backbone needed for a chance encounter with a larger sea-run fish. However, if you want a dedicated rod to take on small salmon, big trout, or the occasional river Smallmouth Bass the Amago is my rod of choice. 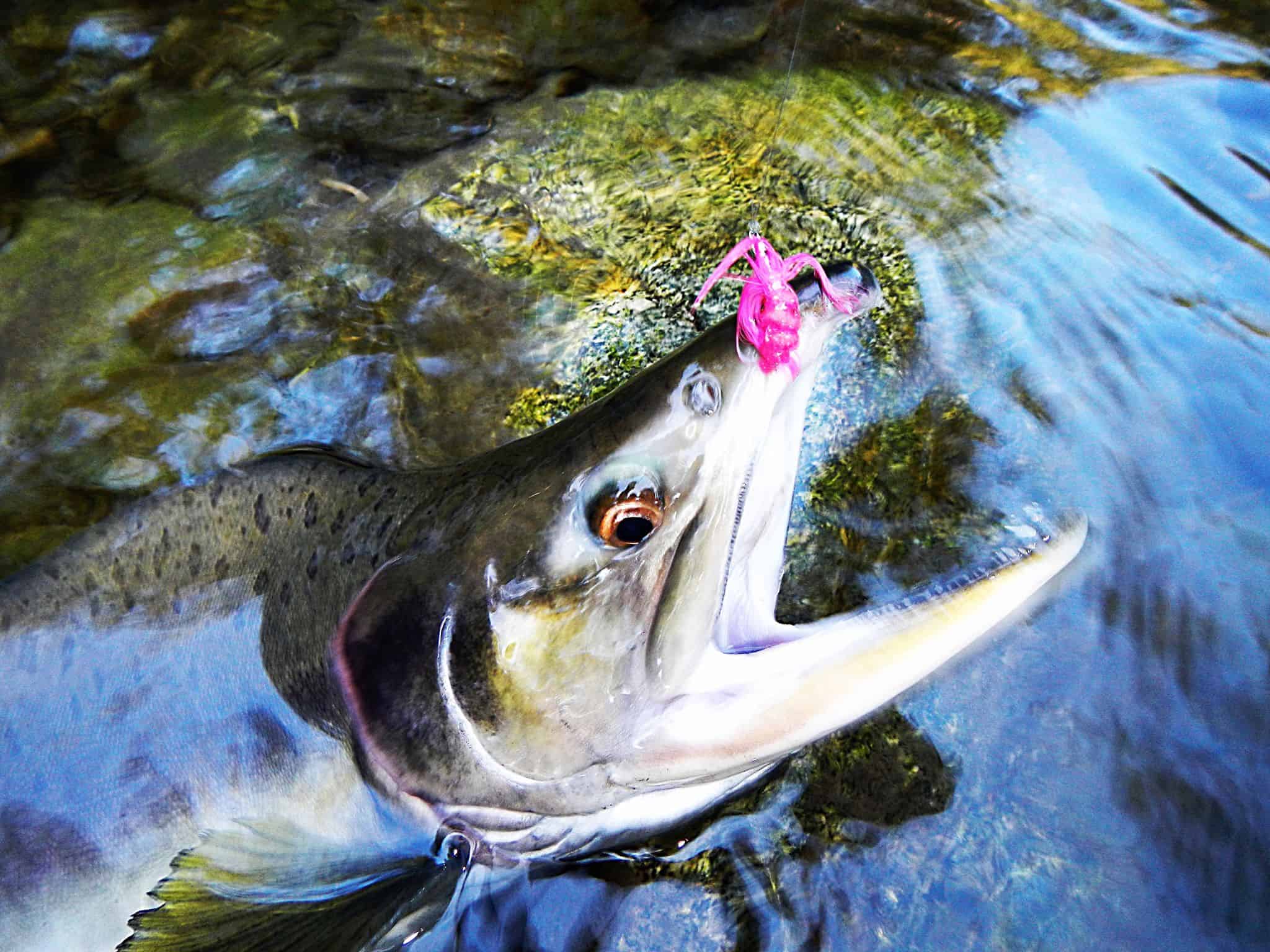 The Amago’s 13’6″ length opens up a lot of opportunity on big rivers but is still short enough to work effectively on more traditional tenkara rivers. I find it throws a 3.5 level line beautifully and with practice you can delicately present a kebari or dry fly at the head of a plunge pool or it can punch a bead head nymph through high winds on a furled line with equal capability. 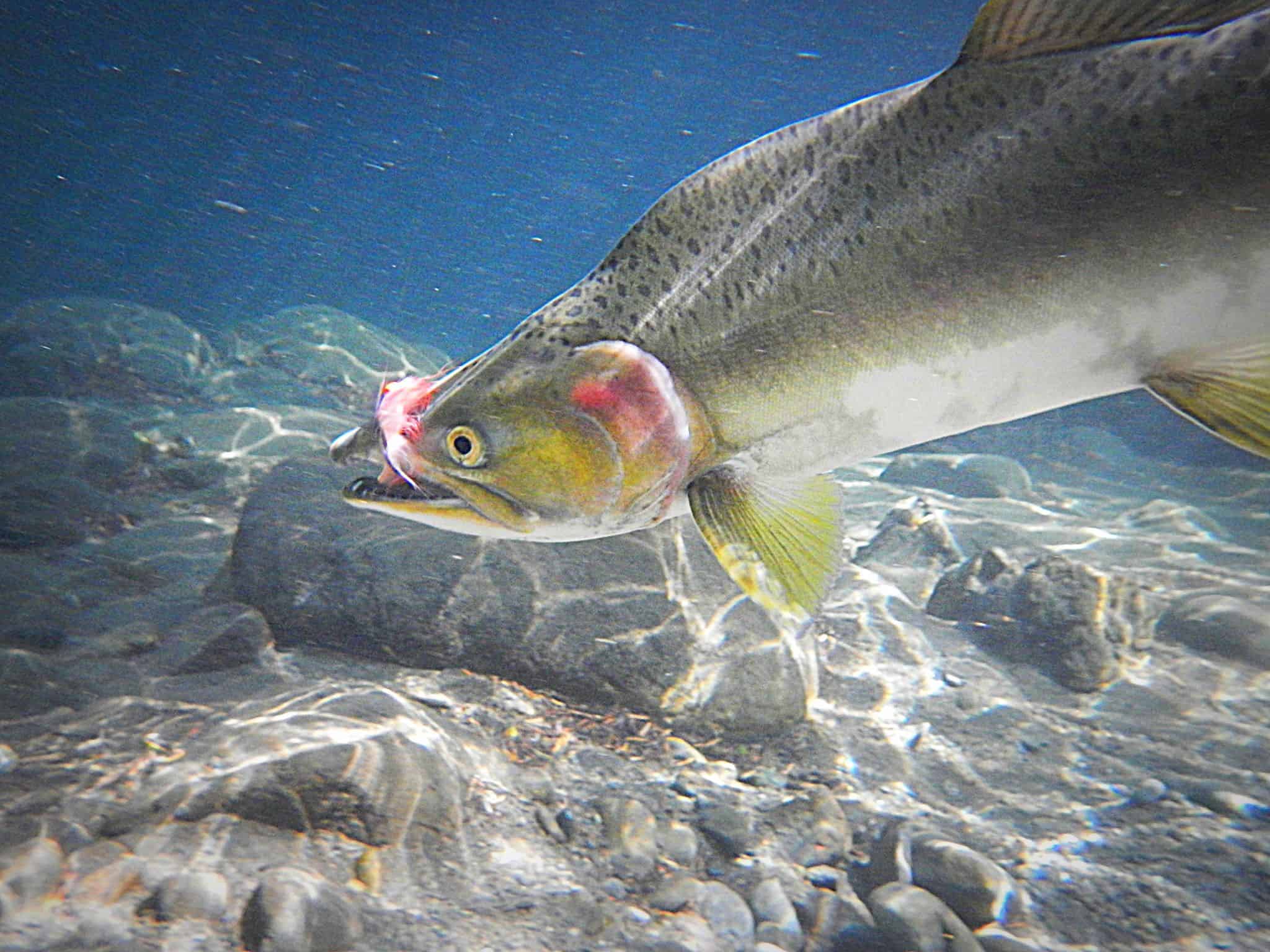 My favorite day I spent with this rod was chasing a massive Pink Salmon run on a small coastal stream. Throwing pink marabou flies and over-sized pink San Juan worms I watched fish peel away in pursuit. There was nothing more exciting and enjoyable than watching the level line jump and sing with each hookup. The rod handled fish after fish up to 7 lbs and earned the Amago a permanent spot in my tenkara rod locker. 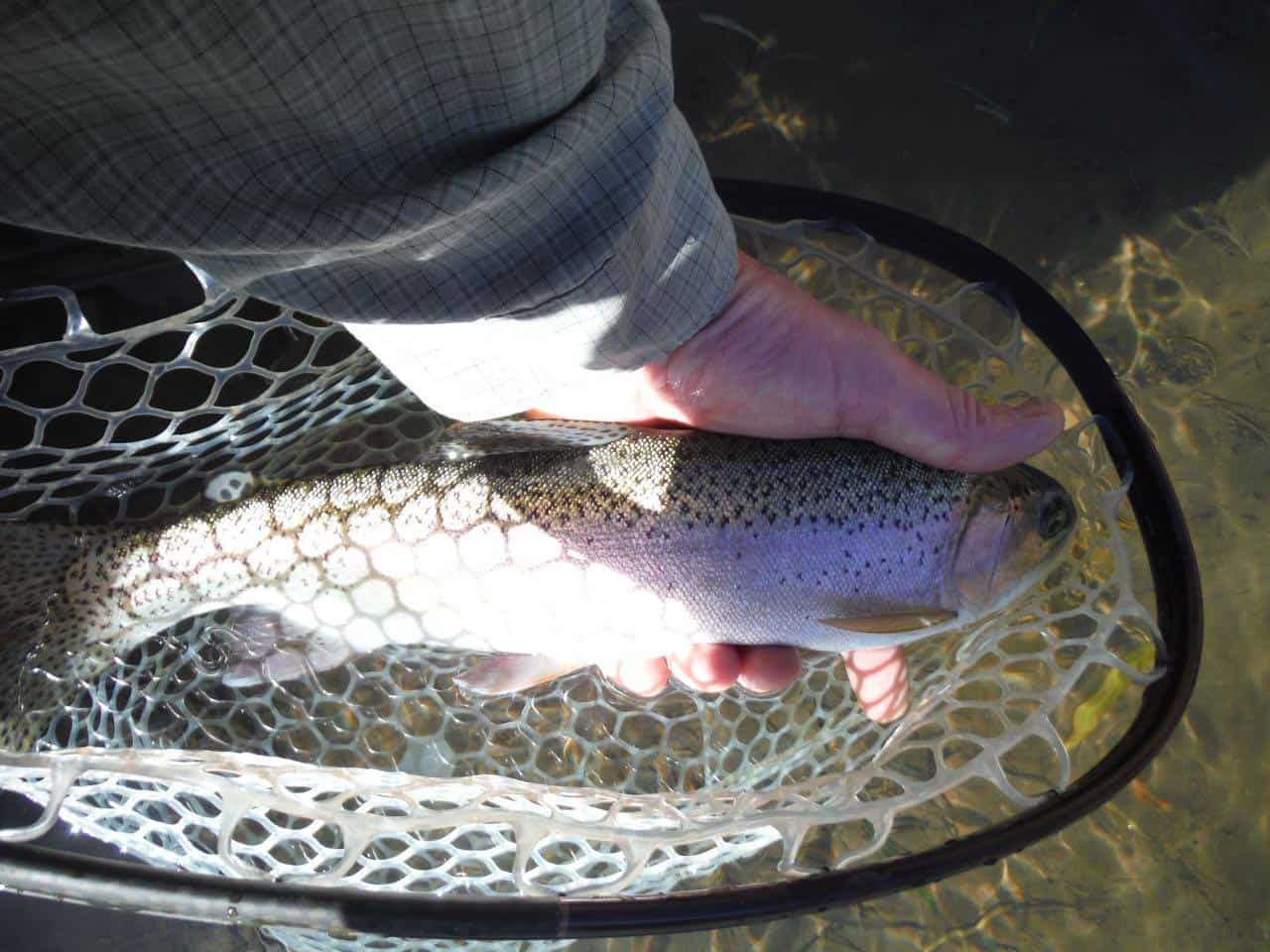 The Amago is definitely one of my top picks for the big trout rod. In Fall when I am hunting those bruisers trying to fatten up for winter I go for the Amago.

It is a well-balanced, stout rod. It has a nice tip to protect the tippet and, feel the subtle takes. The backbone is robust so I can still put the meat some bruisers, or set the hook when working the Small Mouth Bass. Some might say it is too much for a Sierra Trout stream. I disagree. The length of 13.5’ and the nice tip gives the sensitivity to still feel and play the small fish. The balance of this rod keeps you from getting fatigued after a long day on the river. The rod feels light in the hand while casting all day.

Casting this rod is very smooth. It is easy to cast light and heavy lines alike. I prefer furled lines. Though this rod casts furled and level lines alike. Switching between the two types of lines; I notice little to no difference in my casting stroke. Of the lines I have tried I have not found a line too light, nor too heavy for this rod to still form nice smooth loops.

The Amago is a treasure to always keep by my side. 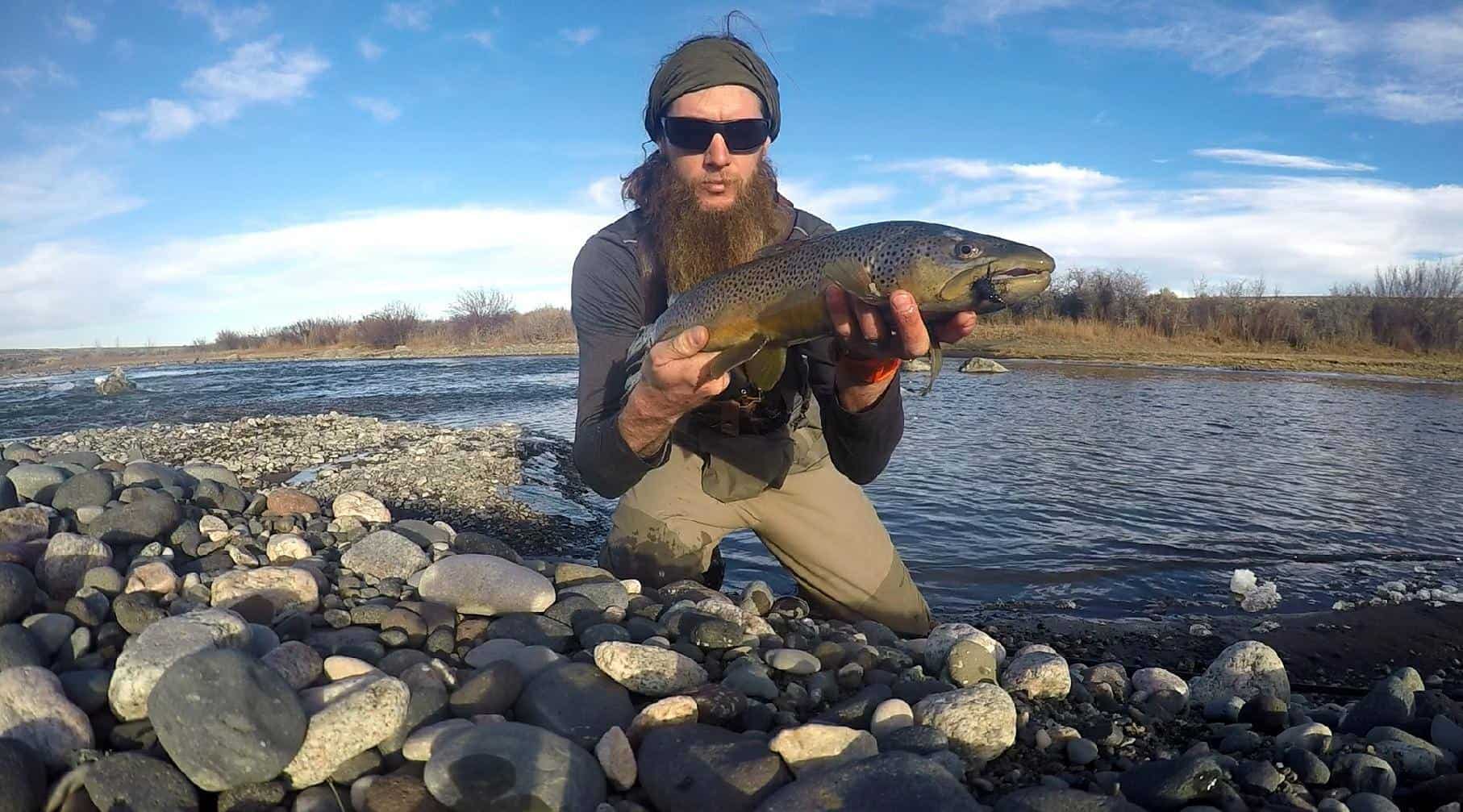 In my experience as a tenkara angler, the longer the rod you are able to use the better. When choosing a long rod, why not choose one with a back bone? 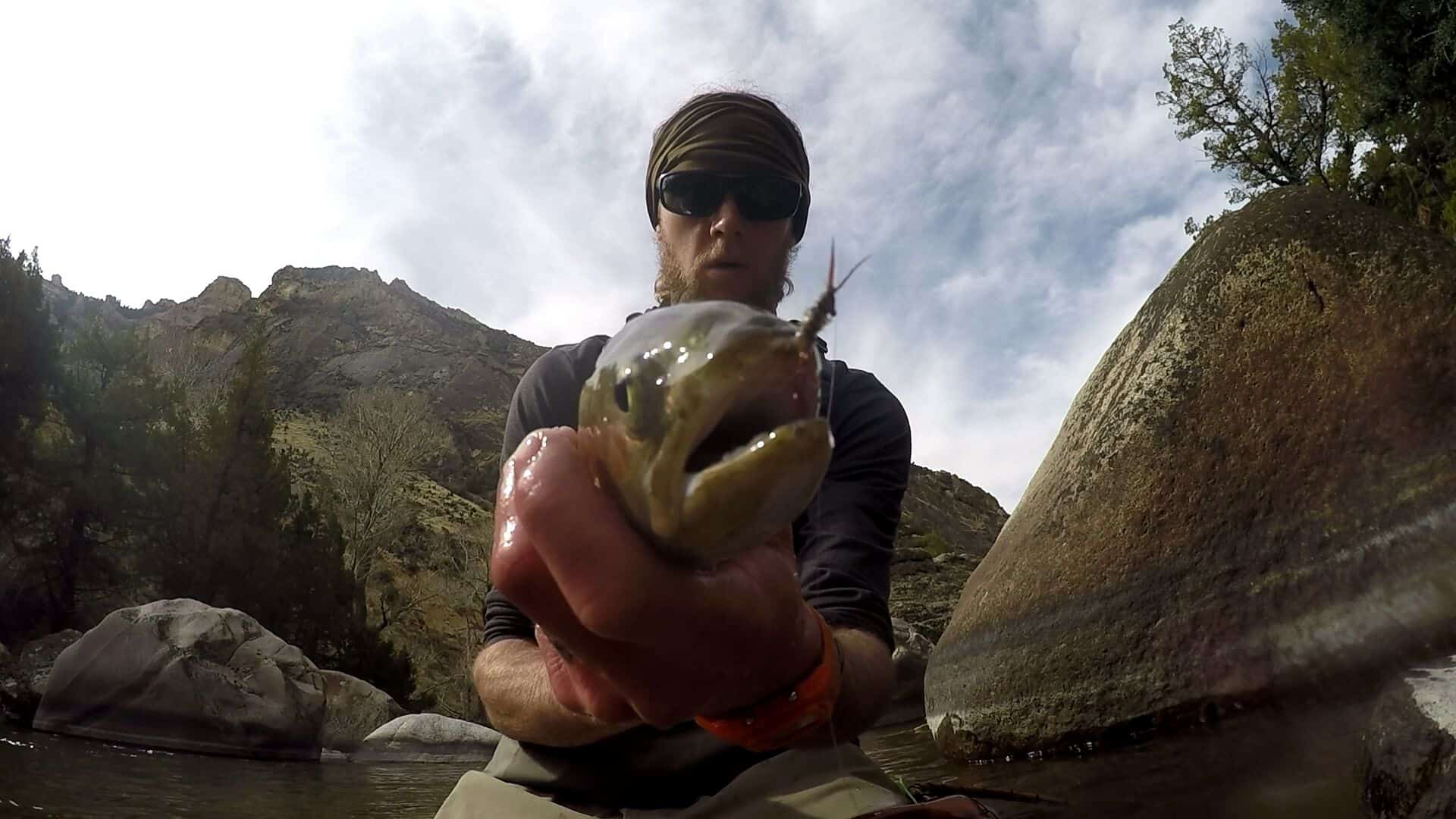 I chose the Amago because there are big rivers that hold big fish. It allows me to chuck streamers or delicately present a dry. 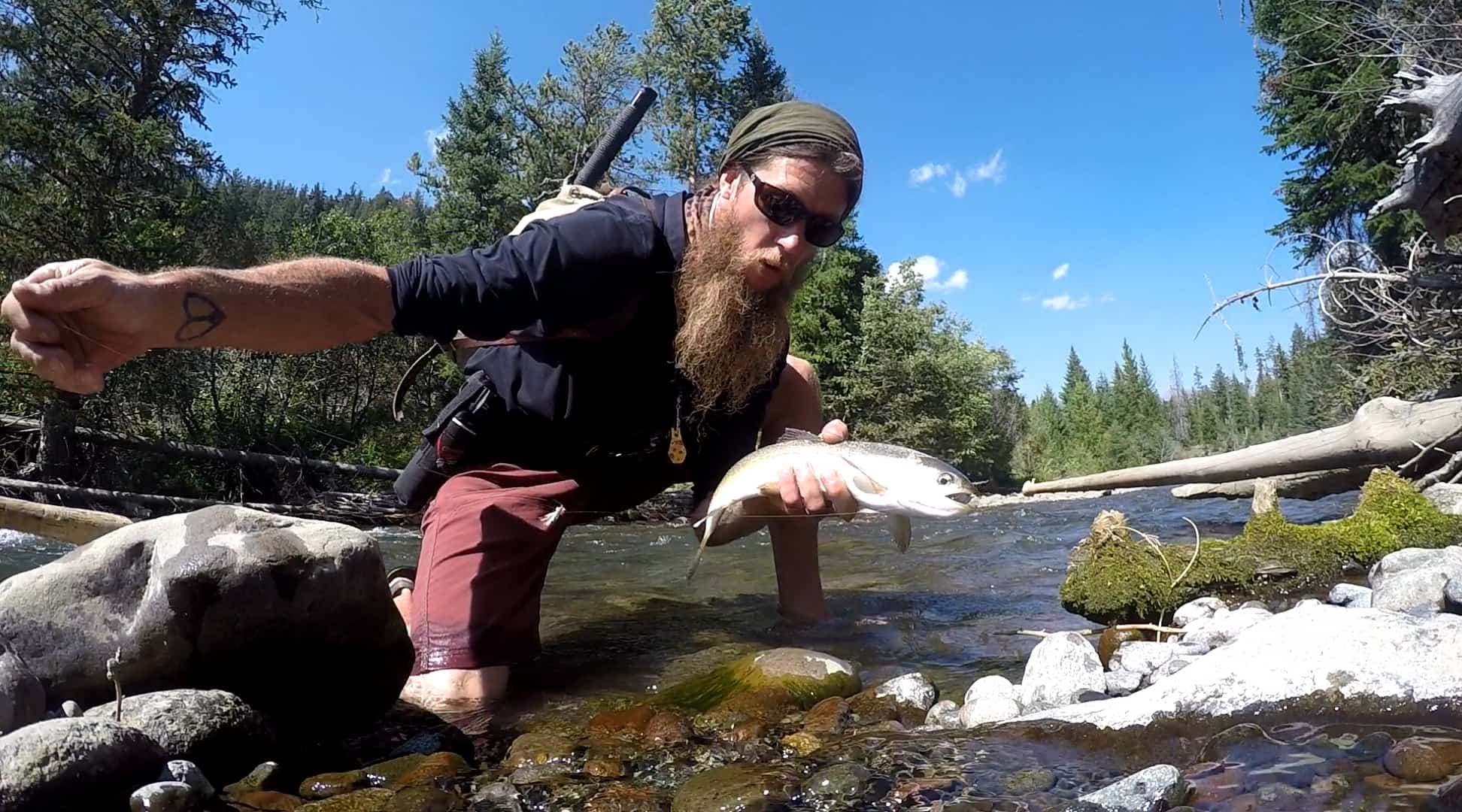 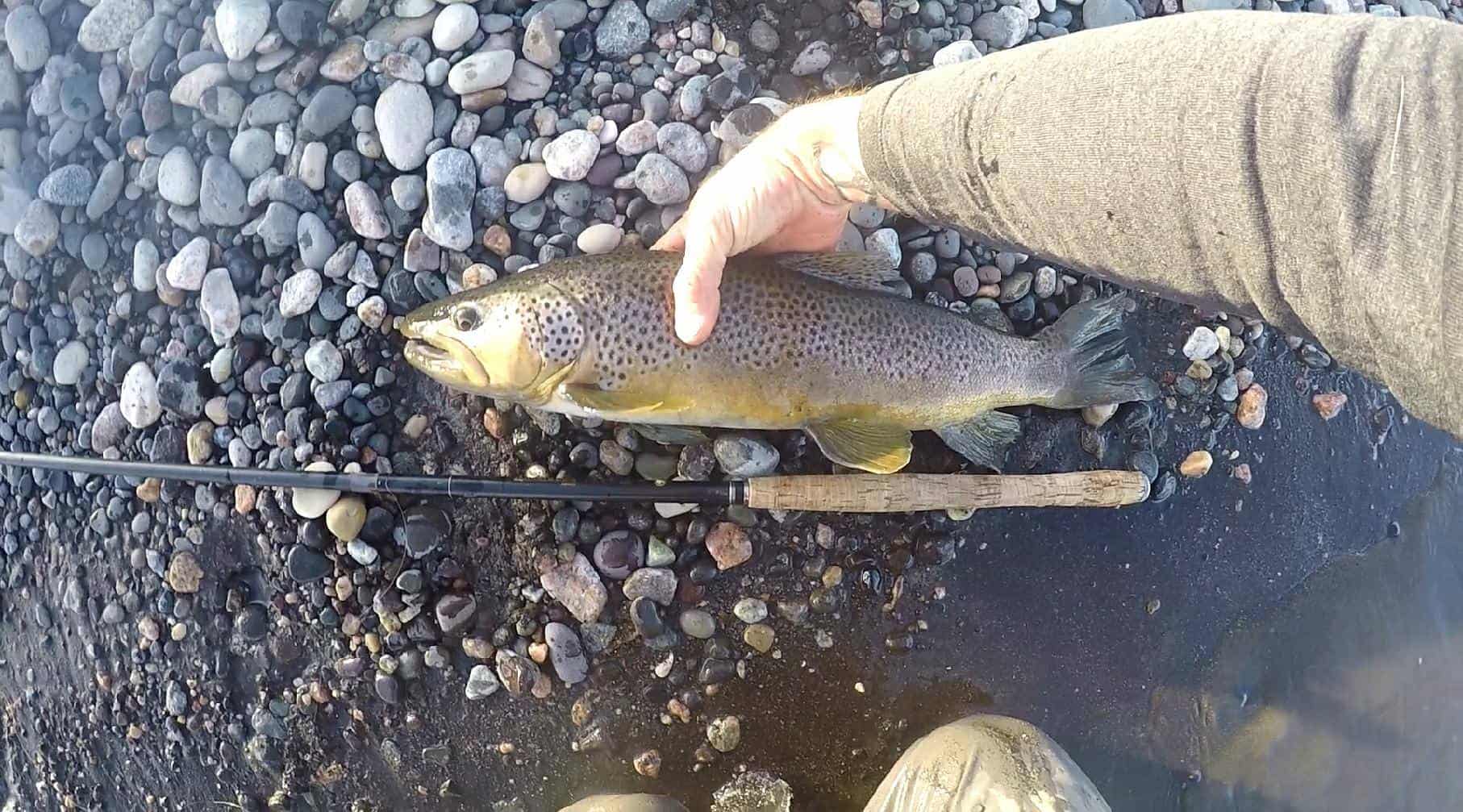 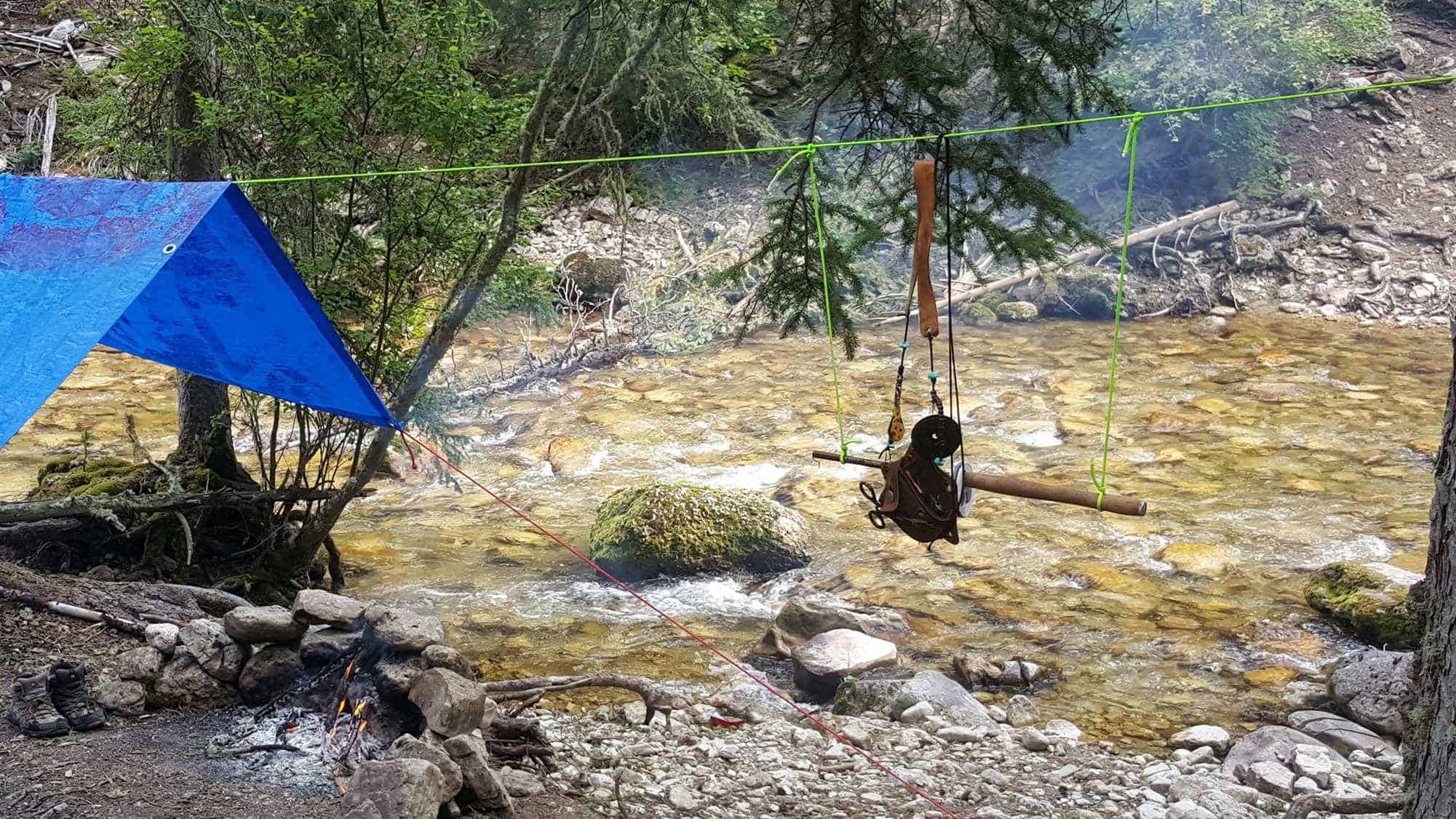 I first purchased the Iwana, because I typically fish high mountain creeks and rivers. Later picked up the Amago for a big river/fish rod, and would you believe it’s the only 2 rods TUSA has that the tip segments are compatible. Who woulda thought?! I take both and always have a rod to fish with, and for parts (the tip seems to be more prone). 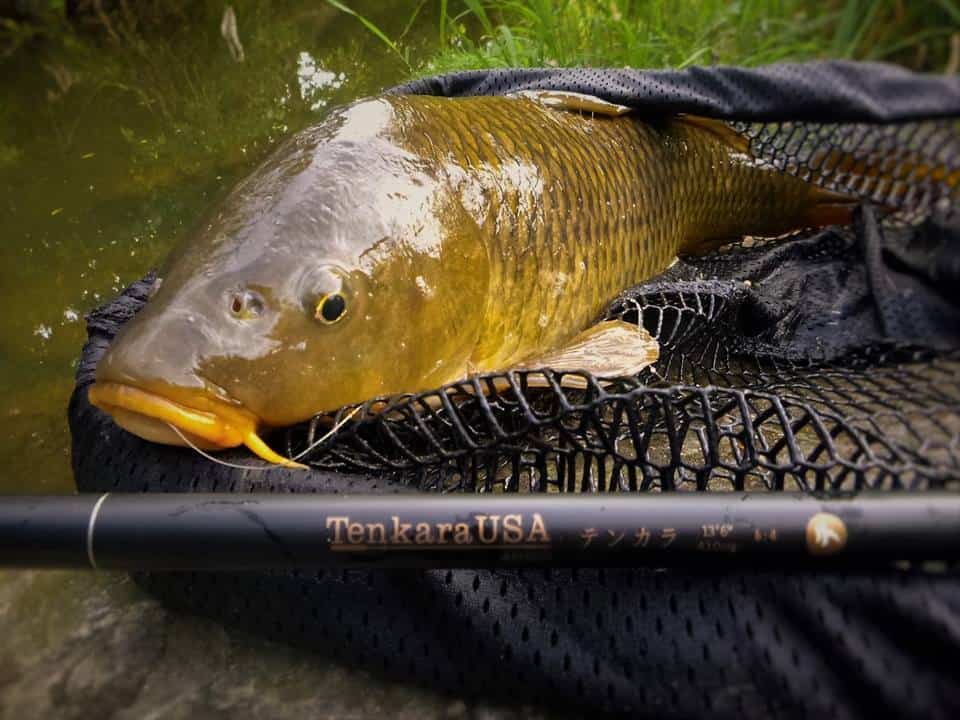 Ohio provides us with a very diverse fishery that requires the utmost knowledge of species and tactics.  Being from Ohio our trout waters are divers and far from the traditional Tenkara mountain streams also.  Our creeks and rivers provide everything from Spring Creeks to Tailwaters to Freestone and even these in combinations.  These streams require the utmost stealth and precise presentations.  Tenkara provides that best option for success in these tough situations.  The Amago is the tool for the job.  With the right amount of length, flex, and power the job is much easier than with traditional Western Fly gear.  Either fishing a Kebari dry or as an emerger anyone can quickly make the drift needed to these wary trout.  The ability to fish across currents without drag and excessive mending makes the Amago the perfect tool to carry while guiding also.  Ohio trout fishing is limited to a small number of waterways.  Some of these waters fish all year, but to be a successful guide in our state being diverse is a must. 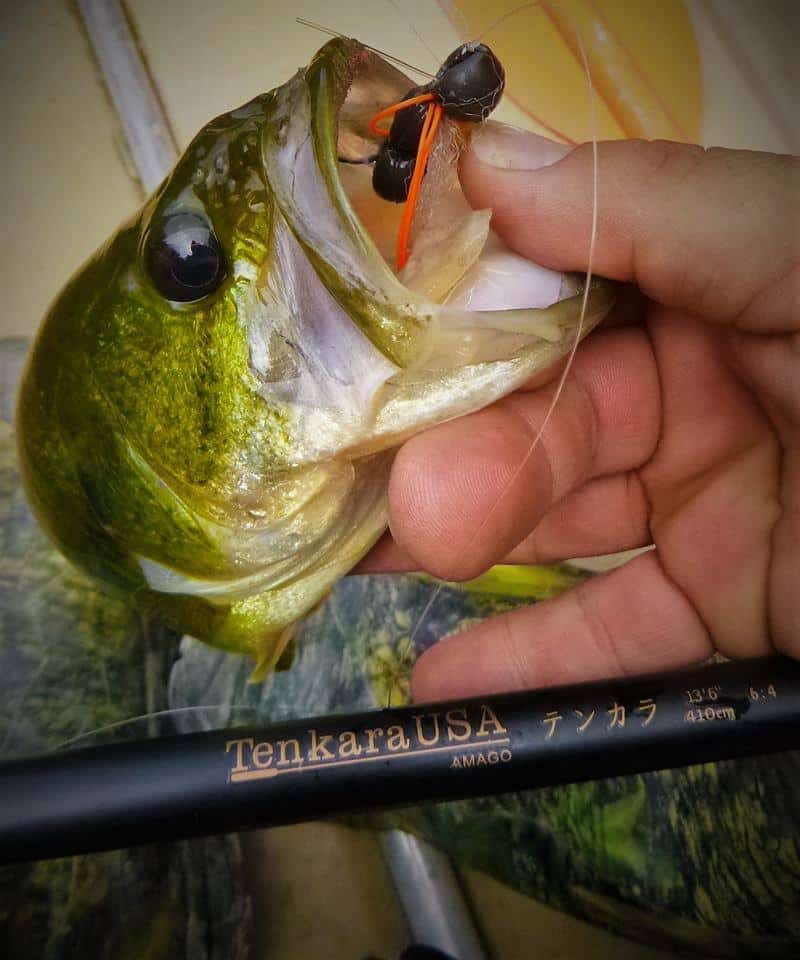 Mainly I fish for warm water species.  Largemouth and Smallmouth Bass take up much of my time on the water.  While Tenkara is not the typical tool for most, my pack or boat is never without one.  Specifically the Amago meets the needs of myself and my clients.  This rod provides the ability to cast a small popper accurately and the power to set the hook and fight a strong fish.  The majority of my stillwater bass fishing is a sight casting game.  Being able to make a quick cast and then pickup the fly and reposition is a must.  One of the best example of the perfect tool for this happened this past season.  I fish and guide an area with many lakes and ponds filled with bass and panfish.  On a scouting trip with my 8 year old son and father-in-law we were having a tough time coming in contact with fish.  We could see them, but they were not interested in the conventional lures they were throwing.  They were covering top to bottom without much success.  As they fished I pulled out the Amago and tied on a popper. While still rowing the boat I could make a cast to the underside of an overhanging limb.   Instantly a bass exploded on the fly.  As I set the hook I handed the rod to my son and he landed the fish.  He repeated this for a couple more fish while my father-in-law was trying hard to hook up.  Soon I pulled out another Amago, lined it up, and tied on a popper.  After making the cast and a twitch a big Bluegill took the fly.  I immediately handed the rod to my father-in-law and after a nice battle the fish was landed.  I told him I needed to keep the boat in position and for him to go ahead and fish the rod.  He reluctantly agreed and after a few casting instructions was hooking and landing fish on his own.  This was the first time he had ever touched a fly rod.  His initial reluctance turned into pure joy.  Now he has put away his conventional rods and lures and only fishes Tenkara.  That day they caught close to 40 bass and panfish all on the Tenkara. 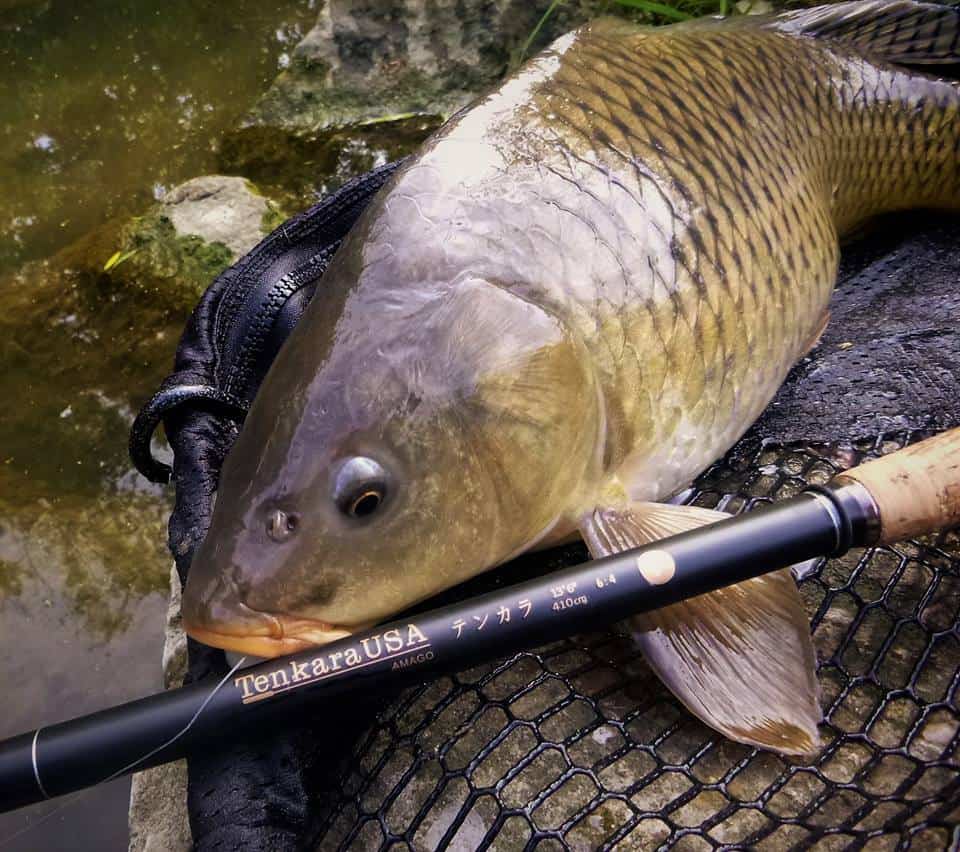 While bass and trout are my main target with Tenkara, the Amago offers the ability to actually land some bigger species as well.  There are many waters that have a great Carp population.  No matter where I am fishing the Amago is with me.  This time I was Smallmouth bass fishing and found a pod of carp feeding.  After a quick fly change and slowly moving into position I presented my fly and let it sink.  After one twitch the fish ate and the fun began.  That fish swam in every direction doubling up the Amago.  It was a battle that took a few minutes, but I was able to control and stop the fish when needed.  The fish was landed without over exhaustion swimming away hard.  This routine was carried out a couple more times throughout the rest of the day.  Casting a bushy weighted fly is usually quite the chore with a smaller Tenkara rod, but the Amago makes this unconventional fishing much easier.

Bottom line is that if you want a Tenkara rod that provides the most versatility to fight bigger fish or cross over from trout to warmwater species then look no further than the Amago.  Grab a Tapered Nylon leader and the 4.5 level line and you are ready for an adventure! 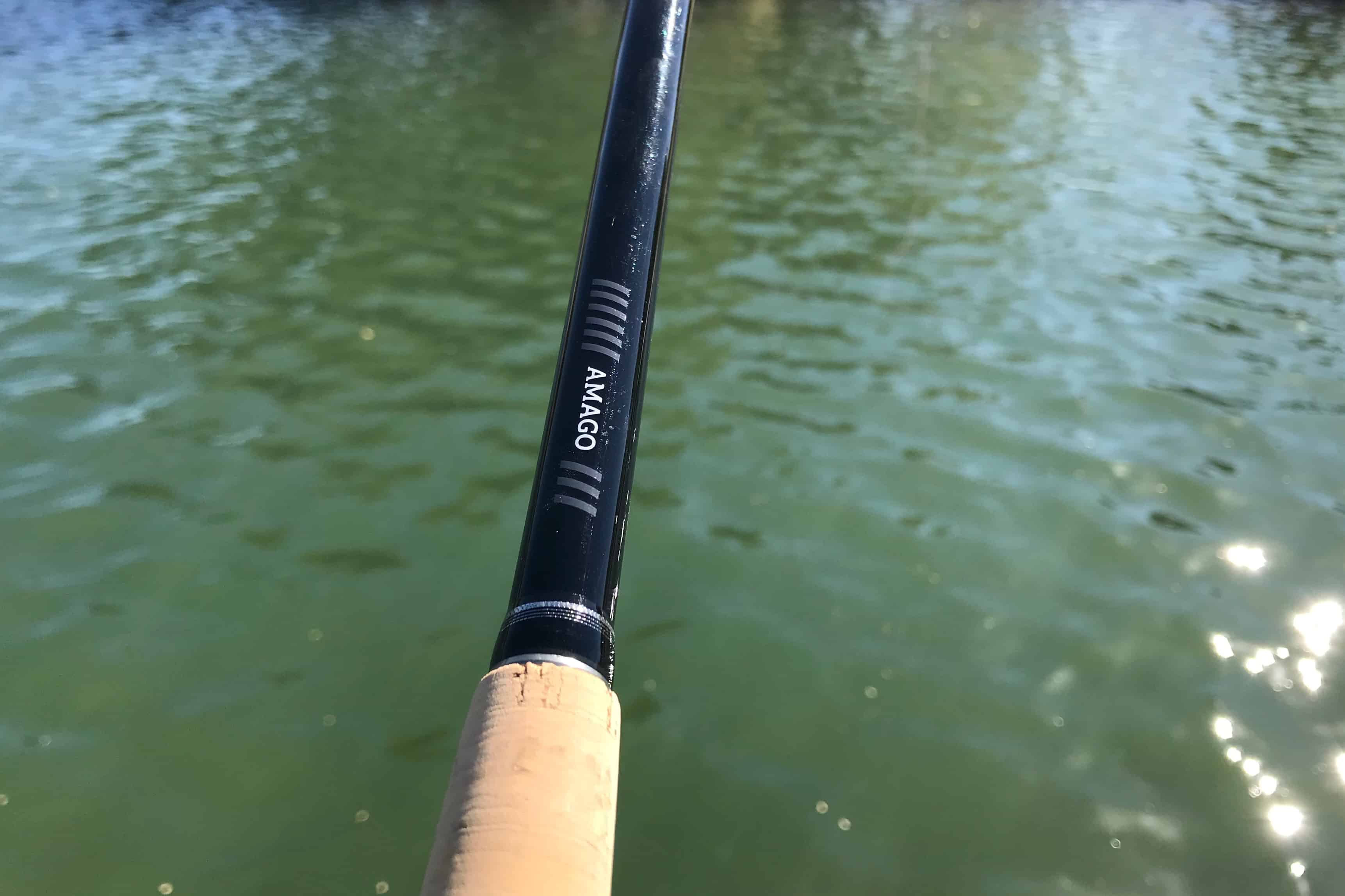 I only started using the Amago in the last year. For non-zoom rods of 4m or longer, I’ve chosen Japanese tenkara rods. But as I started to collect my kit for fishing the Colorado River in Marble Canyon, exploring with my packraft, I thought about the Amago and started to use it. I can only say that it does it’s job very well.

At 4.1m, it has reach, combined with lines of 4.5m – 7m, this rod can really reach out and play big fish. I consider it one of my favorite long rods and I regularly use a 5.5m line with it.

It is a rod with good tactility and I really enjoy the way that it will cast a long line. The rod has backbone and out of all the tenkara rods that I have cast and owned, this is the one that reminds me of a western fly rod. As a matter of fact, since I no longer fly fish, I jokingly refer it as my fly rod. I’ve spoken to other tenkara anglers and they know exactly what I am talking aboout.

I do not doubt that in the near future, my largest trout on a tenkara rod will be taken on the Amago. And that personal record for me still stands with another Tenkara USA rod, the Ito!

« …from the book “Learning tenkara” Interview with John Lawrence Geer »