Trip Report: The Accidental Discovery of a Technique

With the end of the Fly Fishing Show season I finally feel that I can enjoy my new home  and the new homewaters that surround it. There are two beautiful streams within a 10 minute drive from home, but I have barely fished them at all since arriving here. Between moving in, visiting family in Brazil and being gone every weekend for the shows, with barely time to catch up with other stuff in between, I was really missing the water. I have to get my priorities straight again.

Yesterday evening Margaret and I went to check out Eldorado Canyon, an area we hadn’t yet visited since moving here and through which South Boulder Creek runs.  We had our dog along, and not much sunlight left. So I really wasn’t focused on fishing. But, I also had brought a tenkara rod and my kit along just in case. We hiked through some snow down to the stream, which had a pretty good amount of water, and I setup my rod. It is winter, the fish tend to hold deeper and be less active, and since Margaret wasn’t fishing I told her I was just going to try “a few casts”. I wasn’t expecting much. 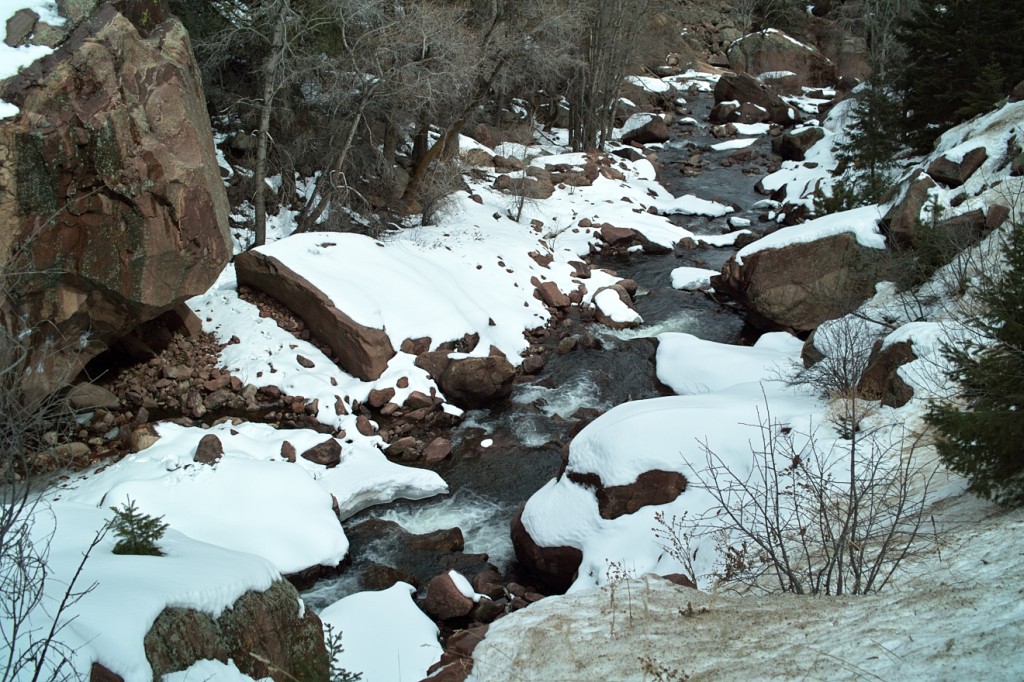 Feeling the hope that all anglers feel when they cast to a pool, I proceeded to cast my fly, an Oki kebari, to the first pool. I apprehensively awaited for a strike, but nothing on the first dead drift. I cast three or four more times, and moved to the next pool. This pool looked “fishier”. I did one dead drift, but nothing; and so I decided to pulsate my fly a little. Nothing still.“Don don, don don”, I heard Dr. Ishigaki’s voice in my head reminding me to move on.

On the third pool, a slightly slower run, I decided to get my fly down. I cast upstream from the water entering the pool, drifted the fly into the plunge, and let the white turbulence take my fly down with it. After a couple of seconds I could see the fly drifting. It was about 15 inches below the surface. A fish came to check it out, and rejected it in the last second.

Normally an angler less stubborn than I – or perhaps someone with more time – may opt to change the fly. But in my mind if a fish came to check it out, it is because it was interested in eating it. I must have done something wrong, perhaps there was some drag on my line, or perhaps I just didn’t quite trigger it. I knew my fly was not the problem. It was now just a matter of figuring how to present it. I still had the Oki kebari on.

The next pool would have to be my last attempt. Even though the temperature was a comfortable 45 degrees, we were in the shadow of majestic cliffs and there was still plenty of snow on the ground. I could see our dog was also getting a bit impatient, and I’m sure Margaret was starting to get cold. I cast my fly a few times, trying a combination of sinking my fly, and drifting it very slowly. For a moment I think I had a follow.

Too many times I have told Margaret, “just one last cast,” but like the boy who cried wolf, she no longer believed me when I said that. It was time to go.

Normally I pull the fly to me before collapsing the rod, get it hooked on my line holder, and proceed to wind the line around it. This time there were a lot of trees surrounding me, to avoid having to wrestle with them I collapsed the rod first. The fly had remained in the water; as it was caught in a whirlpool it didn’t move down with the current. I grabbed the line to bring the fly to me. Hand-over-hand I pulled the slack line that laid on the water immediately in front of me. With the slack gone, I suddenly I felt a slight tension on my line. I assumed I got caught on a branch, but one more pull and the line wiggled. I had a fish on! A perfect end to a beautiful evening.

Interestingly, I remember someone once telling a new tenkara angler to specifically take the fly out of the water when packing for the day lest a fish take it and possibly break the rod tip. I do not remember who said that, and didn’t ask if that had ever happened to him, but for me that was a first.

I found the trigger technique for the evening accidentally: let the fly sink for a while, then pull it slowly a couple of times. Since I had to leave I couldn’t prove the technique would work if I kept doing it in more pools. But, with so much built up fishing desired, I knew I was going to return to the stream this morning.

I arrived at the stream at 9:15AM, and went to the pool immediately above where I caught my fish yesterday. Same rod, same line, same fly. And, guess what technique produced the most fish today? Yes, letting it sink slowly and then pulling twice or three times, slowly, about 1ft at a time. That triggered several fish.

I caught about 12 fish between 9:15 and 12 o’clock. While I did catch a few on dead drifts, and one fish just by dragging the fly on the surface, I’d say about 8 were caught on the sink and pull technique. It was a remarkable morning and my day went by much better because of this great start. I’m glad to be out on the water again, and hopefully new insights and reports will come out of my newly found priority.

7 Responses to Trip Report: The Accidental Discovery of a Technique