It’s been a long, long road.

I typed its first words nearly 5 years ago. But, as I continued to learn more about tenkara, continued visiting Japan and meeting more teachers, and continued to look at words I typed with an increasingly critical eye, the completion of the book I envisioned a long time ago just kept getting further away. Yet, (at last!) tenkara – the book has been received at our warehouse and is now shipping! 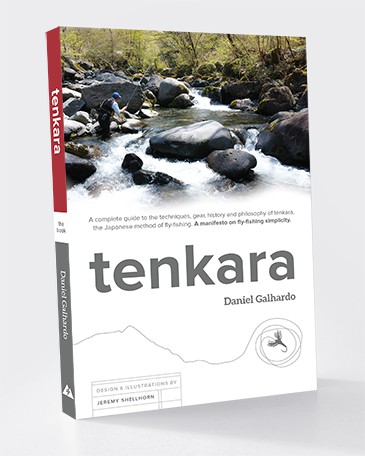 Click here to learn more, read an excerpt and purchase your copy.

With the help of Jeremy Shellhorn, our resident artist, I believe tenkara – the book turned out to be even better than what i could have envisioned years ago. It is something I’m very proud of having produced.

This has been a rewarding project. It has also been challenging trying to put all I could think of in pages that wouldn’t feel overwhelming; to give those who are deep in tenkara all they may want to know while also attempting to convey tenkara’s simplicity. I believe that has been accomplished.

With this book I also launched a new division of Tenkara USA, the Tenkara Press™, which will help us accomplish the mission of sharing the tenkara story. It has been interesting to learn so much about the publishing industry in the last several months. From concept, to writing, to designing and layout, and then finally the printing (which was done close to us in Denver and I watched the entire process) and now working out the best distribution for it, this has been quite an experience. I hope to get some other tenkara titles in production next year.

Those who have backed our Kickstarter campaign will be start receiving the book momentarily as we took care of shipping them earlier this week.