Tenkara Tennessee – only about 2 hours, but fun! 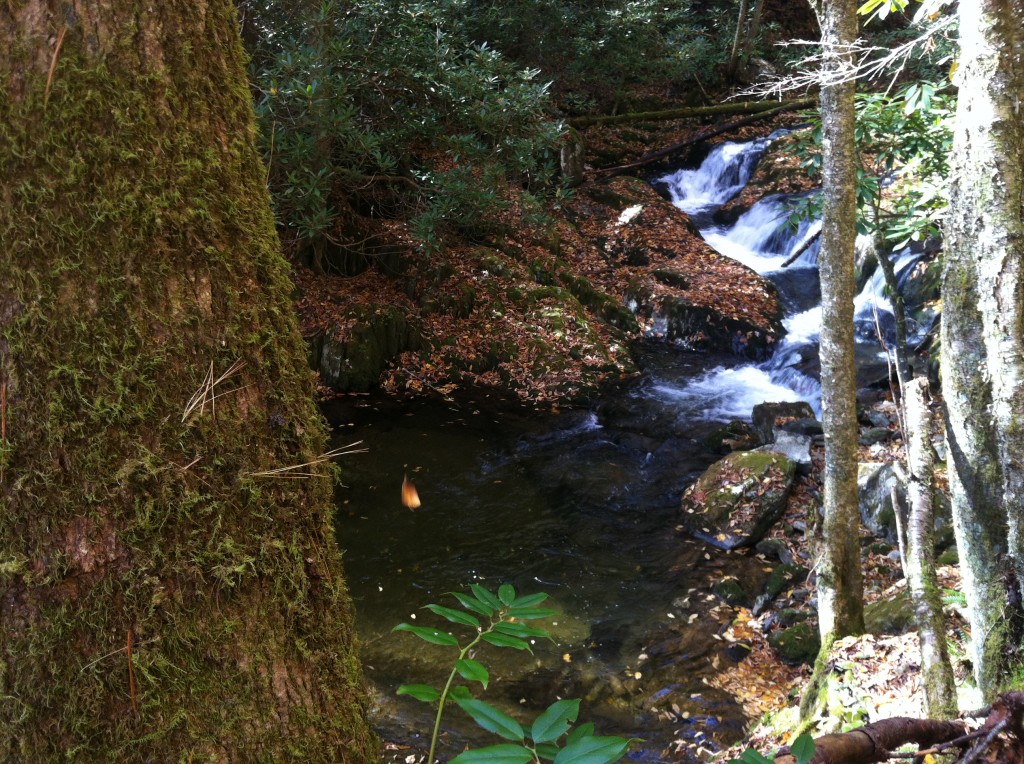 Had a very brief stop in Tennessee today. My main destinations on this trip were Rosman, NC, and Harrisonburg, VA. I decided the best way to hit both spots would be to rent a car and do the 6 hour drive from NC to VA. That would allow me to see the country a bit. When I was looking at a map I realized I’d be going by some mountain terrain and it would be fun to take a break from driving and fish on the way. So, I posted on our forum asking if anyone would be fishing along the way on Friday morning.

Funny thing is that when I looked at a map  to find a location to fish, the town of Unicoi popped up at me. It’s not a large town at all, only about 3,500 people, but I think the name popped out of the map because it reminded me of unicorn and made me think of this post by Mike from Troutrageous! where he spills the beans on the secret of tenkara. Long story short I picked the right town to mention by name. One of the users of our forum, Brad (a.k.a.: bsw330) happens to live there and was available today. So, we hit a gorgeous little stream for a couple of hours and had a blast catching little rainbows.

We both used 12ft Iwana rods, and about 10ft of level line (coincidentally we were both using the medium-visibility lines). Brad normally uses dry flies in that stream, but I nudged him to give the tenkara flies a try since I was there. I wanted to show him the techniques I use. We both caught a few fish on the tenkara flies. After a few moments of slower fishing for Brad I told him it was totally okay  if he wanted to use the dry flies for a change – I really am totally fine with that, seriously! In fact, I think it is good to go back and forth in the beginning to see if there are dramatic changes in results. I understand it takes time to become confident that they can catch fish. I continued catching fish on the tenkara fly, not changing my fly once, and Brad continued catching just about as many fish on the dry fly. The main difference, however, was that now he was able to more clearly see strikes since the strikes were happening on the surface. Yet, at the same time he was missing quite a few of those strikes. I told him about the studies Dr. Ishigaki did where he measured how long a fish would take a dry fly in its mouth (0.2 seconds) but if the fly is under water fish would hold the fly for 0.6 seconds and suspected that was one of the main reasons. Another reason is that the smallest fish were the ones rising to the fly. After a few minutes of fishing the dry fly and realizing that (a) there was not a huge difference in the number of fish, and (b) the wet tenkara fly was producing larger fish (I was catching those :), Brad switched back.

Thanks Brad for showing me to gorgeous water, that was fun.

My camera broke with rain water and some other water that splashed on it yesterday – ah those fish tails! So I used my iphone for today’s photos. 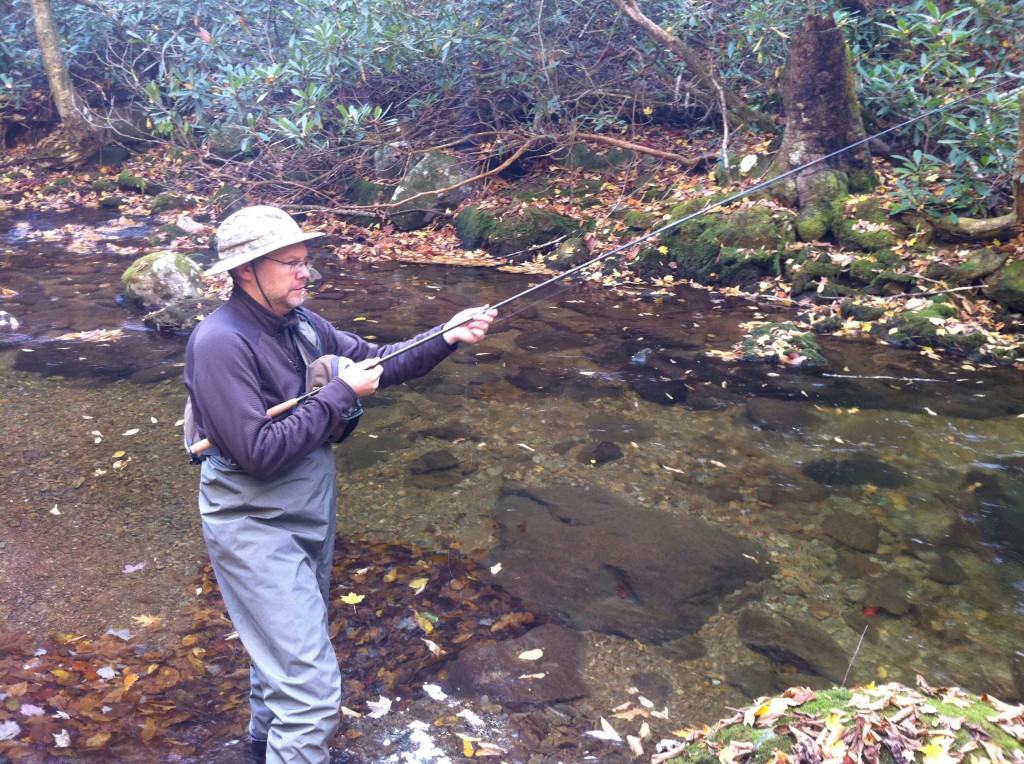 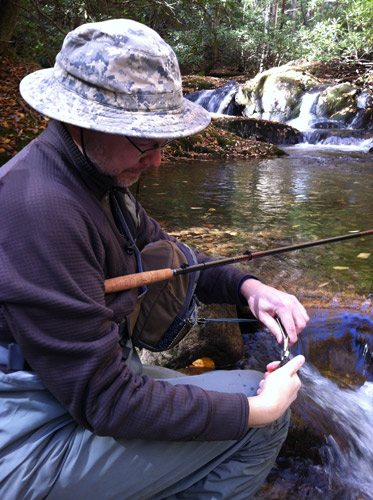 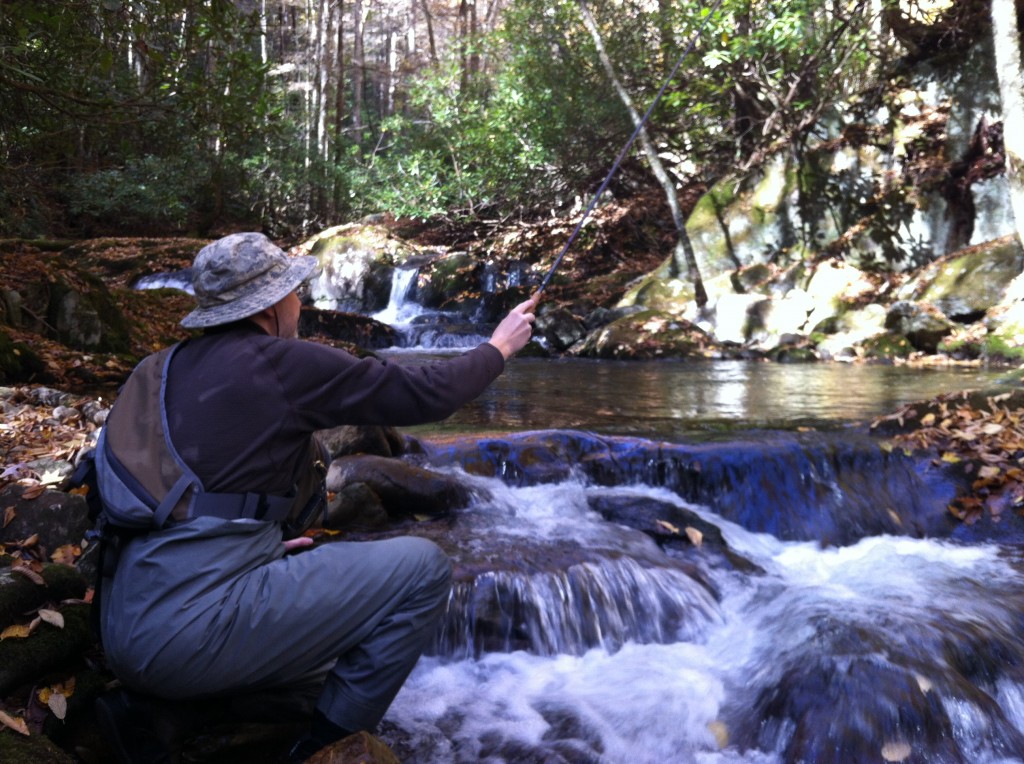 7 Responses to Tenkara Tennessee – only about 2 hours, but fun!