Two of the main goals to fly-fishing technique are attracting a fish, and getting the fish to actually take the fly. Dr. Ishigaki and other anglers in Japan have done many studies on these two aspects of fly-fishing, and have come to conclusions about the best ways to not only attract, but actually hook trout.

Western fly-anglers associate soft-hackle flies with a swinging motion, and thus many people new to tenkara have so far thought of it as a great method for swinging tenkara flies. However, there is a major flaw with swinging a fly: swinging moves the fly away from the where the fish expected it to be. Today’s technique is intended on fixing that. I learned this technique when I was fishing with Dr. Ishigaki in Japan and I complained that I was getting many fish to rise, apparently right on my fly but they weren’t “taking” it. He explained they seemed to be rising right on my fly but he could see they were just missing it and explained why.

When a trout is lying in its resting place, it’s keeping an eye on the food being brought by the current. In normal conditions, free-flowing insects (i.e. not attached to a line) will flow straight downstream. Except for very abnormal currents, they will flow in a straight line. When a trout spots food coming towards it, it moves in a straight line to intercept the food, in its strike zone. However, if the bug (your fly or a live bug) moves towards the shore, it also moves away from the fish’s strike zone. Sometimes the fish may be able to catch it, of course, but more often than not, a fish coming in a straight line upstream to intercept a fly will it if it has moved away from the strike zone. Have you ever felt like trout were rising right by your fly, almost right at it, but weren’t taking it? Many times it’s because they rose where the fly was supposed to be, but you pulled it away.

Next time, don’t swing your fly, try this instead: Cast just slightly upstream, or straight across. Stop your rod  and let the fly flow downstream into its first natural position. Pause the fly in place for 1-2 seconds (depending on speed of current, among other things). Then, and this is where the change comes in, instead of keeping the rod tip in place, or swinging the rod tip toward the shore, actively move your entire arm downstream while pushing it slightly forward. Let the fly move about 1ft or a bit more, and stop the fly in place again for one or two seconds. And repeat, actively moving your entire arm downstream and forward. Stopping it in place is not absolutely necessary but will give fish a better chance to see it. 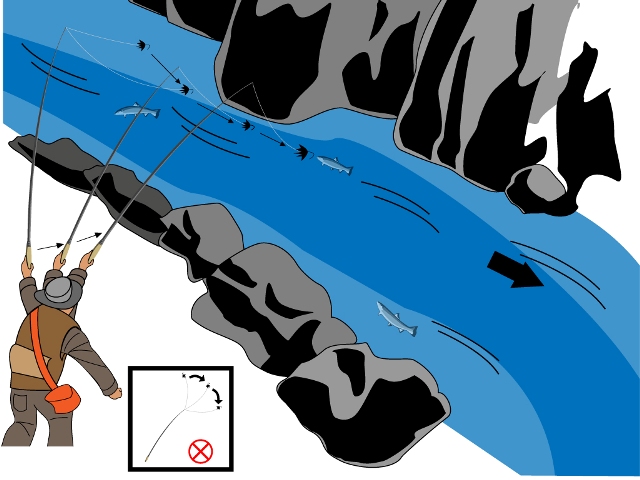 – Stopping the fly in place will give fish a chance to see your fly and hopefully strike it.

– One important variation is keeping the main line in the water so the fly will stay right under the surface. To do this, picture the angler above holding the rod with his right hand. He’s holding the handle high above his head with his right elbow fully bent, and the rod tip almost touching the water on his left (so it’s pointing down). Similarly to this technique he’s also going to be moving his arm downstream and slightly forward.