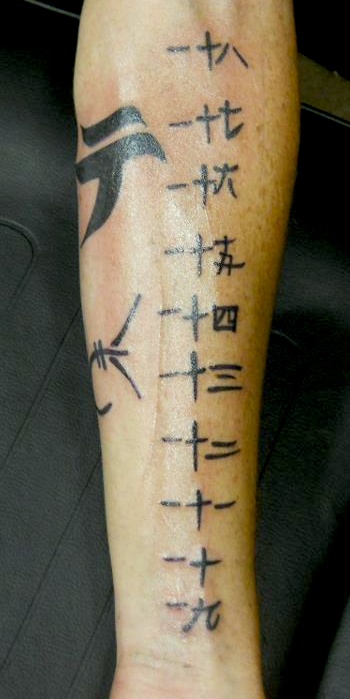 my middle daughter designed it for my bday.”

This was the response Brian Howerton gave me when I asked him about his tattoo. On his very first post to our blog, there was no “hello there”, or “is this really fly-fishing?”, just the image of his newest, very rad tattoo. An obvious sign of a passion for tenkara. One of the things I’m proudest of in the creation of Tenkara USA is the community developed around it. Not everyone posts on the forum, like Brian, whose first post was the shocker above, but I feel that every single customer we’ve had is out there talking about tenkara to their friends. The community is just awesome, and this is an incredible example of it.

As Brian explained, he and his  daughter “did a three day backpacking trip in August, it was during that trip we discussed tattoo ideas while killing time in the tent I think. She designed this based on that talk with me just doing the general layout. She wanted it to look painted on with a brush, even tried to simulate brushstrokes.” On the top left you’ll find our logo – Brian, hope we make you proud to carry that in your arm forever! – then a very neat design of the sakasa kebari (reverse hackle fly) below it, and on the right side are markings from 9 to 18 inches, which is how he’s measured fish for many years.

Brian has been fly-fishing for 15 years and discovered tenkara 2 years ago when he “bought the Iwana because it will fit in my motorcycle mostly. First five minutes using it I caught a 17″ bow and loved it since. Take the darn thing everywhere I go where there is any chance for even a half hour of fishing.”

The tattoo is just the outward sign of his ambassadorship for tenkara: “I talk up Tenkara to anyone who will listen, got the bumpersticker on the jeep and the window sticker on my lunchbox. Handed out the Tenkara ‘ambasador’ cards the week I got them to any friend who fishes, only one bought a rod though. Kebari flies are my wallpaper on my facebook and work computers. Yea, Im addicted to it.

Pretty cool Brian, pretty cool! If you visit Japan you may not be allowed into their onsen (hot-springs), but this will definitely be a good conversation starter with any yakusa-turned-tenkara-angler over there.

P.S.: no, we did not pay Brian to get the tenkara tattoo, but will be sending him a gift!

One Response to Tenkara Tattoo