Tenkara Summit – the 4th one is behind us now

So, the Tenkara Summit is barely behind us and folks are now asking, where is the next Tenkara Summit??? NO IDEA! We still have time, and there will be a 5th Tenkara Summit. Please let us know where you’d like to see it next and what time of year would be best for it. Read our report about this year’s Tenkara Summit.

Wow. What an exciting past few days we’ve had here in Colorado. Hosting Dr. Ishigaki and the TUSA team, taking them fishing and entertaining them kept me away from writing in the blog, sharing live broadcasts of the Summit, and make you feel like you were here. But, I’m happy to report we had an excellent Tenkara Summit, and I hope this report will make you get a flavor for what you can find at future Tenkara Summit events.This weekend a record-breaking number of tenkara anglers under one roof got together in Boulder, Colorado. Nearly 200 people came together for the Tenkara Summit to celebrate tenkara, meet one another, learn tenkara, and just have a great time.

Jason Klass at Tenkara Talk also attended and wrote a nice overview of the event, with the conclusion, “If you haven’t been to a Summit yet, I highly encourage you to make the effort to attend the next one. You won’t regret it. Hope to see you in 2015!”

Officially, the purpose of the Tenkara Summit is to bring the community of tenkara anglers together to share knowledge and experiences with one another and to learn tenkara and how it is practiced in Japan, which is why we always have people from Japan participating. It is certainly not intended (and has never been) a commercial event to sell rods. But, as I shared with those who attended, in reality the Tenkara Summit may just be an excuse for Dr. Ishigaki and others to come and fish in different parts of the country. 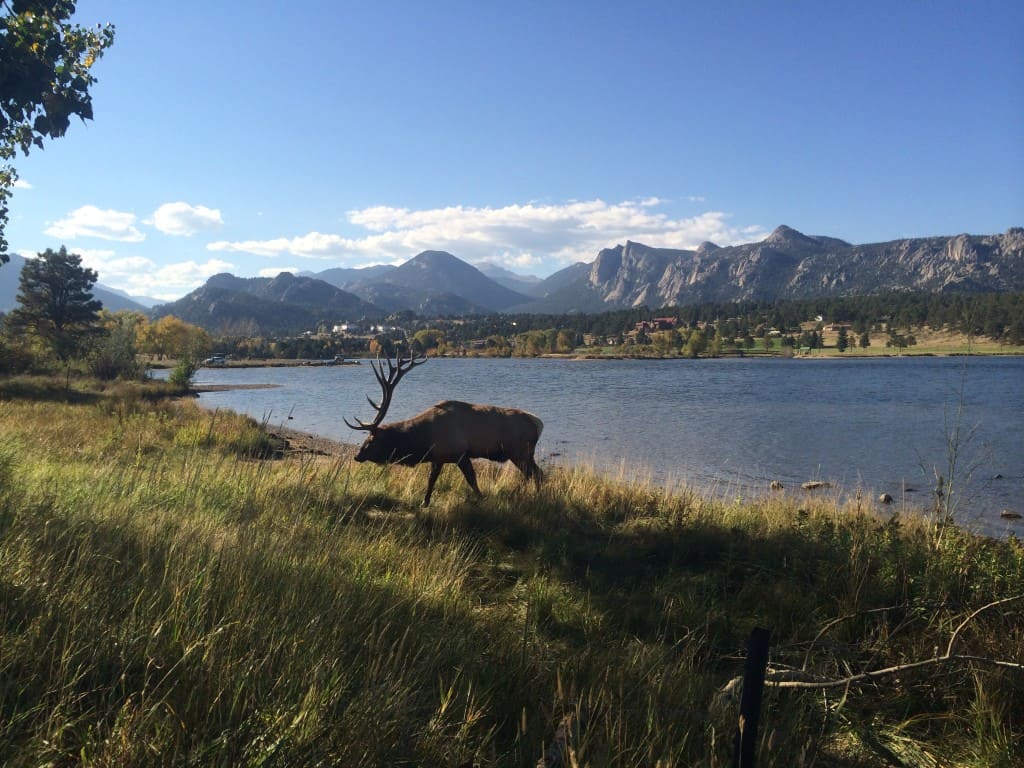 We could say the event started a couple of days prior to the scheduled date. In order to fish the area, Dr. Ishigaki arrived on Wednesday, and I heard of many others in the community trickling in to Boulder starting on Wednesday. On Thursday I took Dr. Ishigaki fishing at Rocky Mountain National Park. It was a short day. We caught a few browns, but the main attraction and the reason I wanted to take Dr. Ishigaki there was for the elk. It’s rutting season and we were sure we’d see some. The highlight was finding a large herd after we left the park, with a large bull guarding his harem.

The next morning we left at 6am to attempt catching some large trout. We went out to the Colorado River and Williams Fork,  a couple of hours away. We were joined by one of the tenkara guides in our network, Allen Seagraves, his son, TJ, John and another tenkara guide Steve Conrad. The day started off painfully slow. No bites, no nothing, no matter what we were attempting. The water seemed to be running a bit high and off color, so we suspect the water levels had just been changed by the dam above. We crossed paths with 5 or 6 other parties and everyone reported the same thing. Regardless of whether they were using reels or not, matching the hatch or staying with a simple fly, not much luck. At lunch time, while we ate, Allen fished in front of us and hooked the first fish of the day, a very nice rainbow. 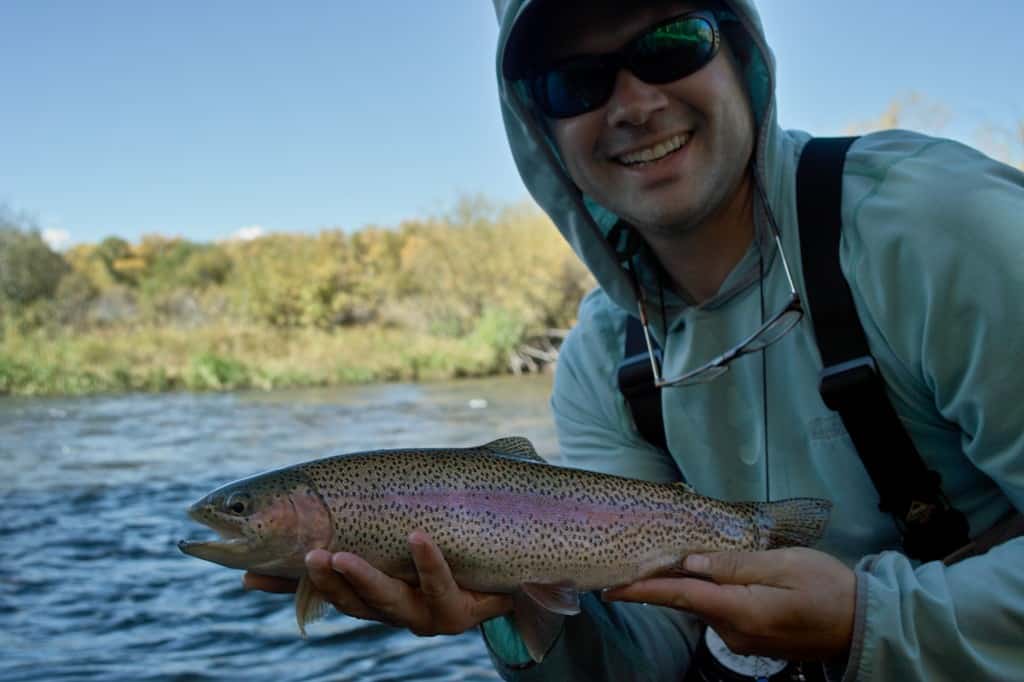 It’s always so hard to deal with a situation when fish are not biting. Whether you are a beginner or an experienced angler, it always shakes your confidence a bit. But, mostly it makes you wonder what is happening??? I’ve had days when things were slow and I really wished someone more experienced than I was fishing with me. I have thought to myself in those cases, “I wonder what Dr. Ishigaki would do here?”. But, in this case, we had a team of very experienced anglers all fishing together. I’d venture to say that this was probably one of the most experienced teams I’ve fished with. Among us we tried many tactics, flies and rigs, yet, just about nothing was working. Dr. Ishigaki and I stayed with traditional tenkara flies; Allen tried those too but also some multi-fly rigs, split-shot with tiny nymphs and other rigs. Steve tried dries. The fish you see above was caught on a traditional tenkara fly, but after that fish nothing else and we fished very hard. 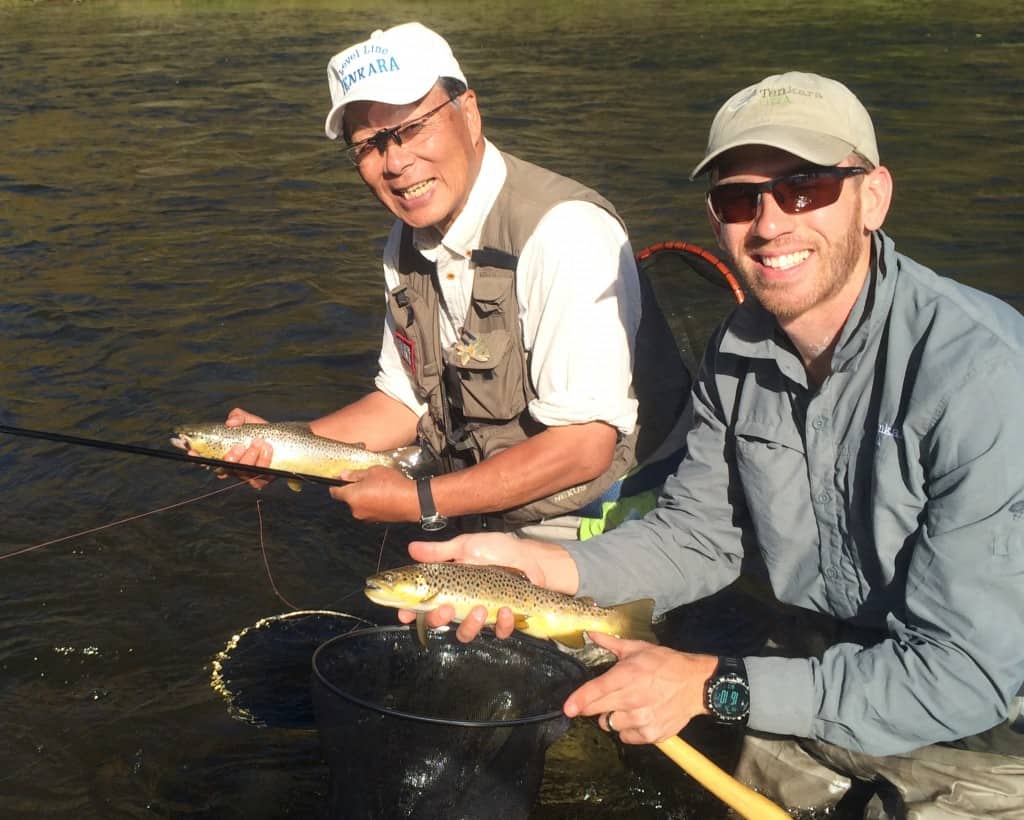 Another reason we thought the fish were really not biting was the bright sun. And, perhaps that was the reason after all. At around 3:30pm we were about to give up and go home. We would have a long day the next day after all, and I still had a lot of work to do. And suddenly a nice cloud cover came in. That changed everything. Almost immediately a couple of people hooked up. Then I noticed some bugs fluttering out of the water and trout rising. I suspected caddises were breaking from the surface and fish were going after them with gusto. I still had my tenkara fly on, an Oki kebari at the time, and I decided to skate the fly. But, it was a different skating technique, a bit like pausing and drifting and skating combined. I had my first fish on. Then a second on the same technique. Dr. Ishigaki was upstream from me. I tried explaining the skating technique I was using, demonstrated it and had a third fish on, he proceeded to the same and hooked a nice fish. Well, I finally had a chance to show Dr. Ishigaki something new. In the next hour all 7 of us were on to multiple fish with that technique. 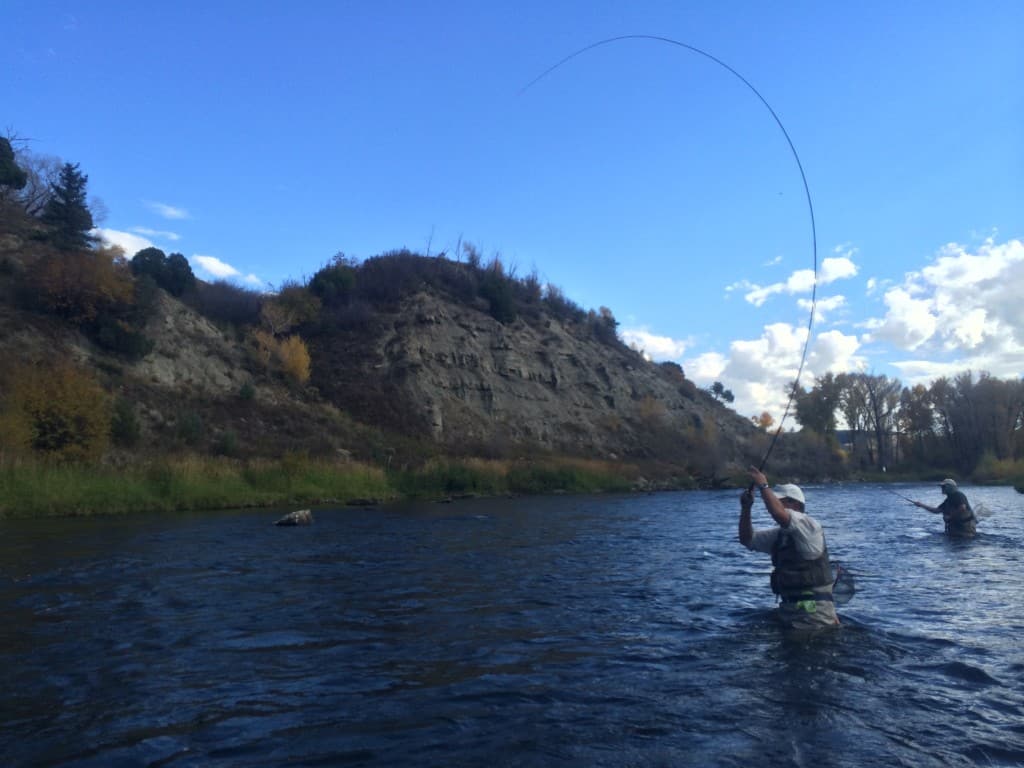 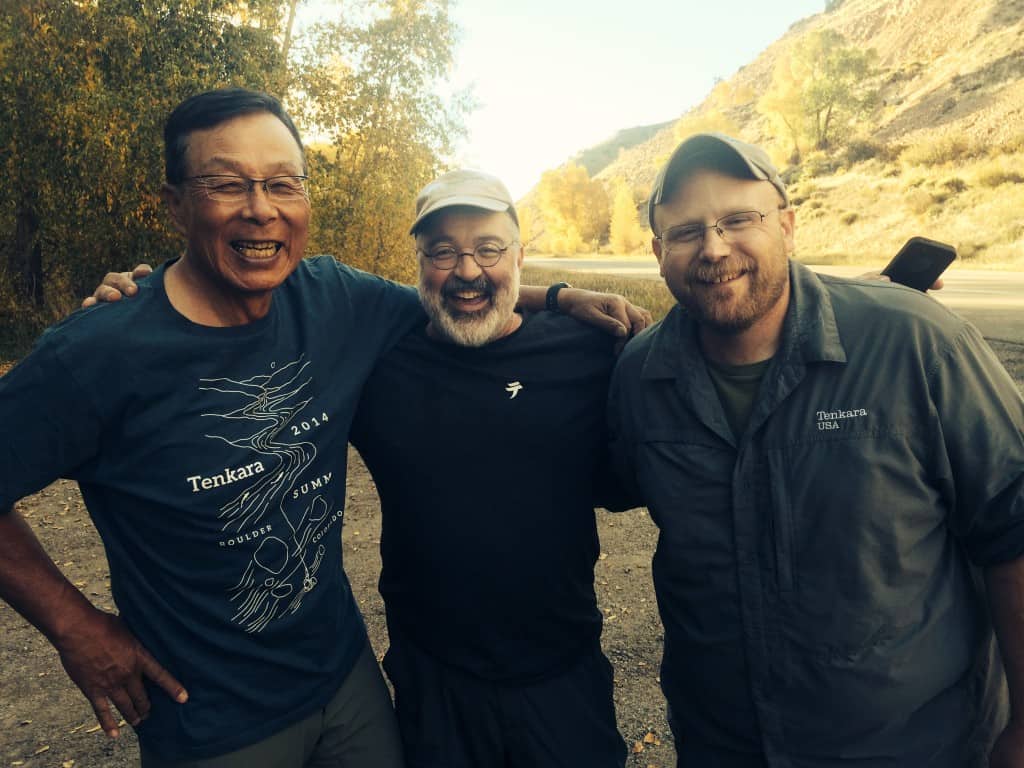 Things slowed down when the sun came out again, which was probably for the best. I had a big presentation to give the next day, and ever the procrastinator had not even started on it. A two and half hour drive home awaited for us. We still caught a bit of the magic hour, which shined upon the yellow aspens and stunned our honored guest. 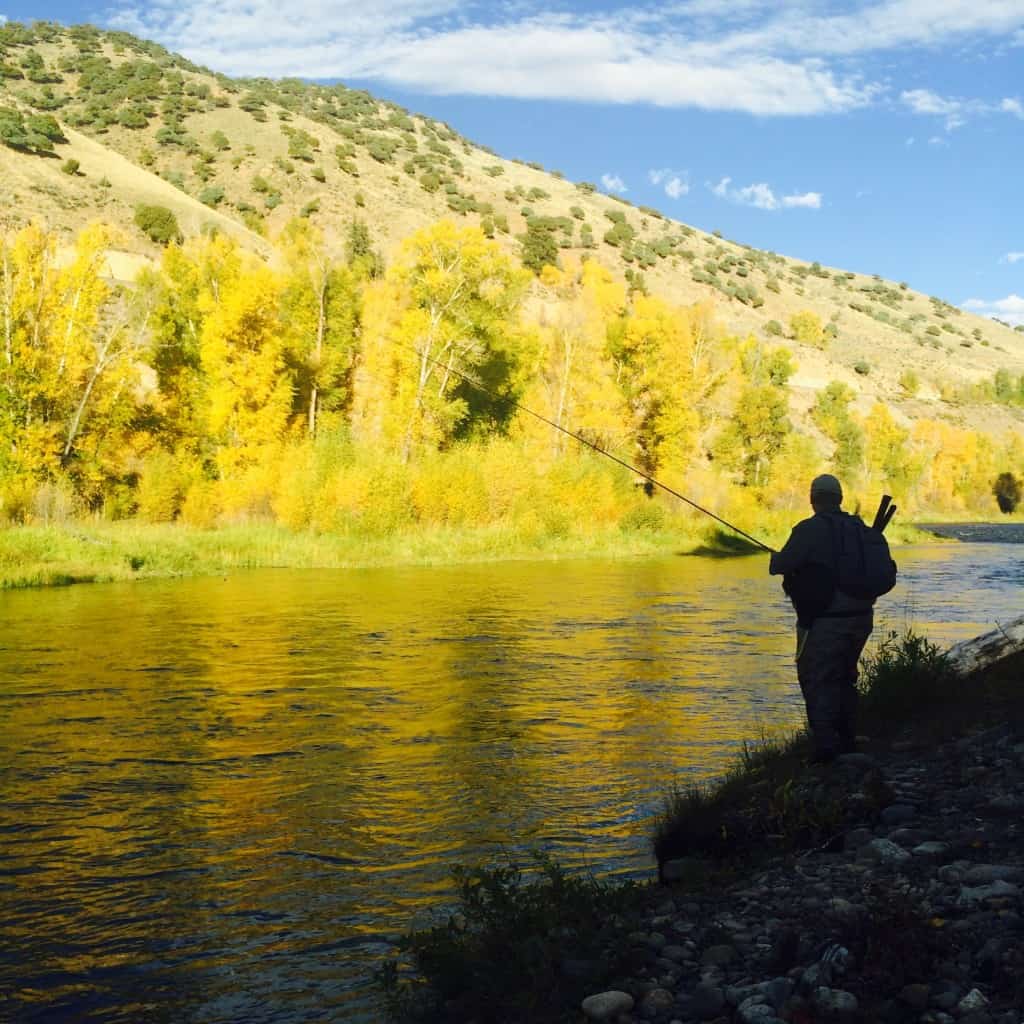 This year we had an incredible team of volunteers helping out and a great event coordinator. But, for me it was hard to fathom what 200 people would look like in an event I was organizing. We started preparing early, meeting with the volunteers and getting all roles sorted out. And then people started trickling in, and the auditorium started filling up. My heard started palpitating fast, but thanks to a great team of people I could see things were under control. This was it. The biggest tenkara event ever put together was about to start. 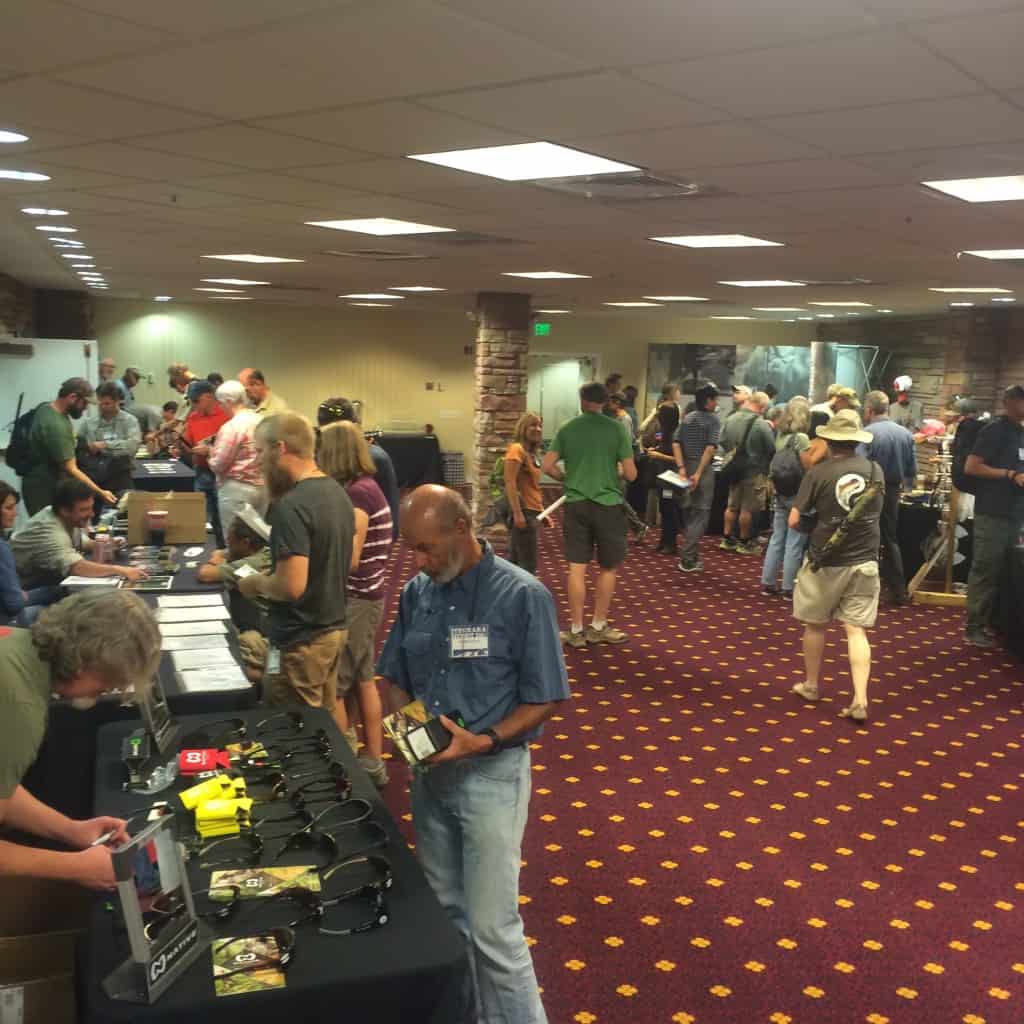 The day ran smoothly. After welcoming people to the 4th Tenkara Summit, we had a presentation and Q&A session with Dr. Ishigaki. Then we headed downstairs to the vendor and demonstration sessions. Between 10:30AM and 2pm volunteers setup fly-tying demonstrations and clinics, rigging sessions to show how to tie it all together, and casting clinics. Dr. Ishigaki also did a fly-tying demonstration and followed that by doing a techniques demonstration on Boulder Creek a few steps away. He managed to hook and land a trout in front of the captive audience.. Just about 80 people watching, no pressure! Lunch was also served, along with some great beer in our commemorative pints (a few were left over and we’ll make them available soon). It was one of the nicest atmospheres I have experienced in an event, very casual. The tenkara community is super friendly and just a lot of fun to hang out with, I’m very proud to the movement that has been started in this country and the people it has attracted. 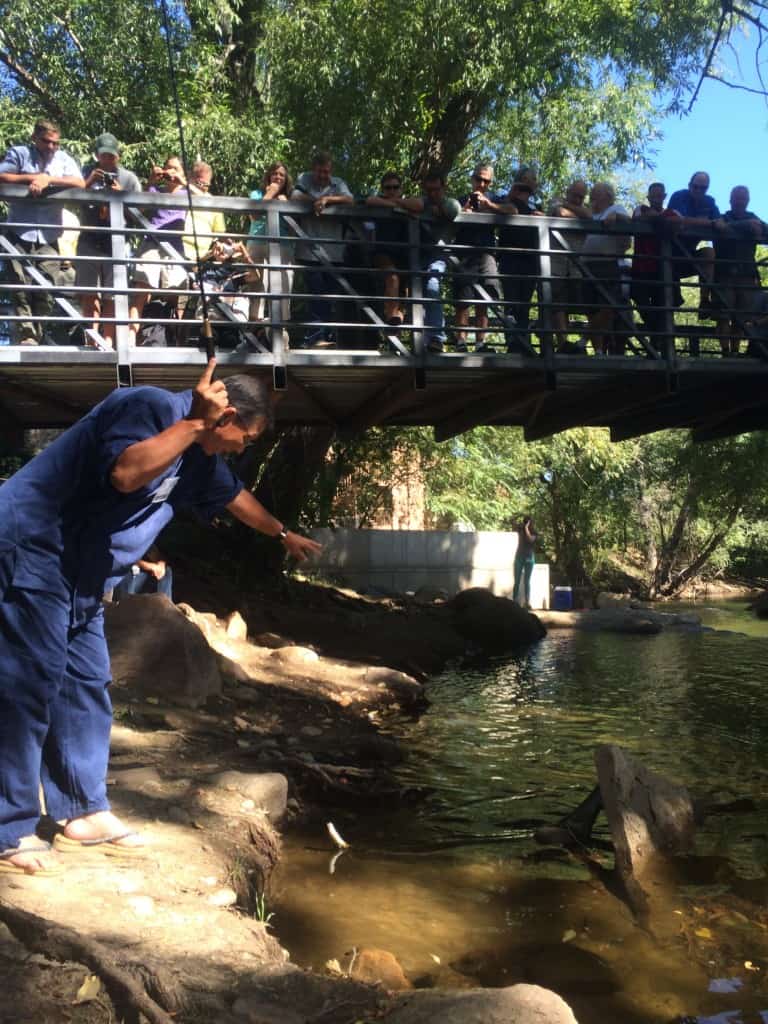 The outside time was followed by a tenkara magic show by Dennis Michael (aka Dennis Vander Howen) who entertained the audience by first showing a beer can that may as well have been discarded on the stream come back to life and getting full with fresh beer again (talking about an environmental solution, I think he needs to teach that trick to the world).
Presentations by Trout Unlimited on the state of streams in the area, by Rocky Mountain Anglers on the waters near Boulder and by Steve Schweitzer on fly-fishing Rocky Mountain National Park followed. 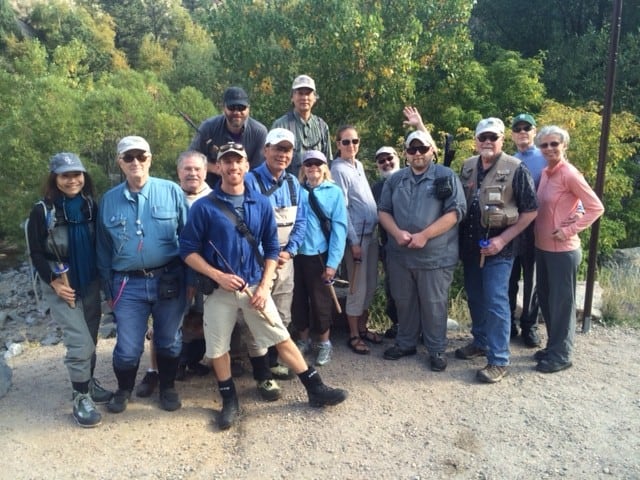 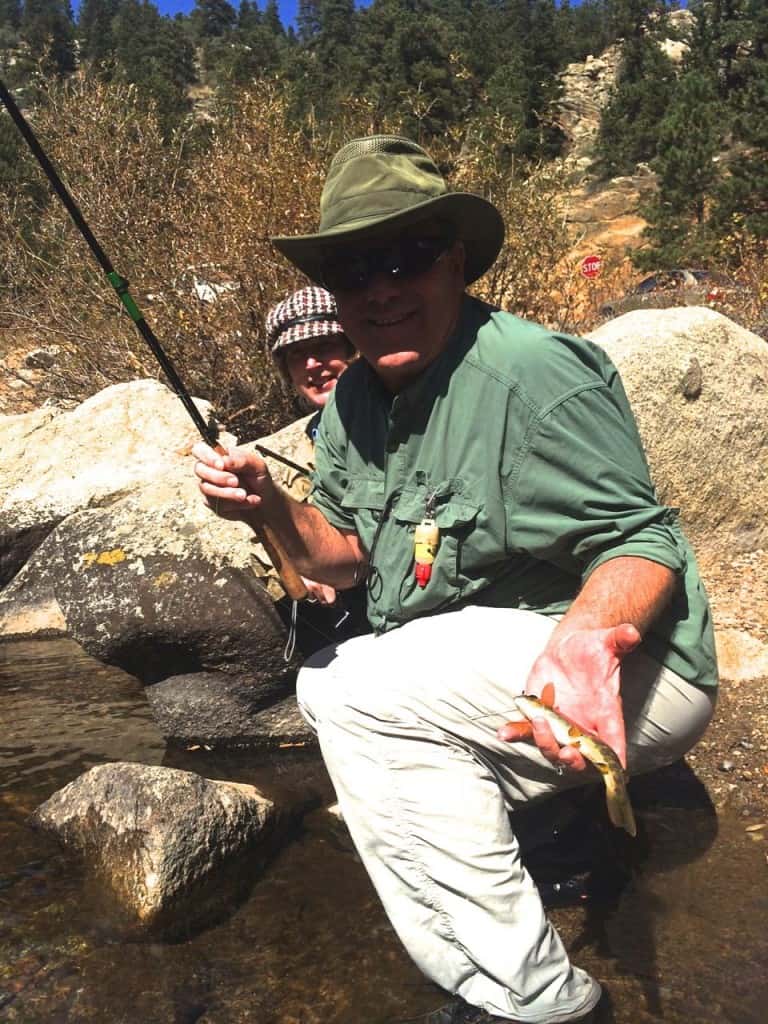 The next day we drove up Boulder Canyon meeting people along the way. We started with a relatively large group at the indicated starting point. From there on we drove and stopped whenever we saw a tenkara rod or Tenkara USA sticker. I completely overestimated how many groups we would be able to meet as the day went on. This portion of the Summit was a very loosely organized part. It was intended as a fishing day for all, where we encouraged people to fish up the Canyon and have a good time. We probably met up with 6 groups in our time there. It really was a great time and very good opportunity to get to know some excellent people in the community and of course, catch fish! After Boulder Canyon Dr. Ishigaki asked if we could catch some brook trout. I delightfully obliged. And, we were also rewarded by a few very unexpected cutthroat trout, which I had never seen in those waters before. 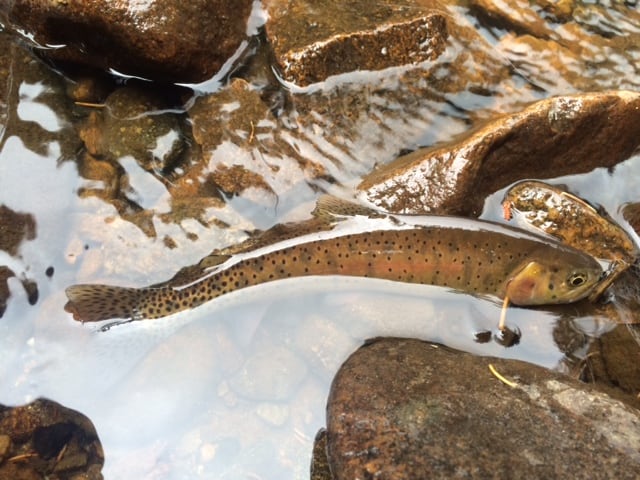