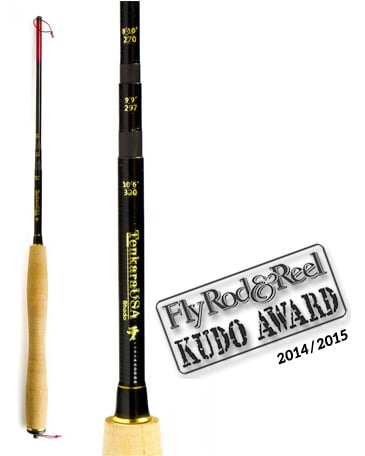 The Tenkara USA Rhodo, an adjustable tenkara rod we released earlier this year, just received the “Kudo Award” from renowned author and tenkara angler Dave Hughes and Fly Rod & Reel magazine (and yes, we do love the fact that a magazine with “Reel” in its name just gave us a Kudo Award”).
When I emailed Dave to thank him for the nomination, he responded of how he was showing the rod to someone, “I held my fingers on each side of the +/- 3″ section that has the extension ferrules, and said, ‘This three inches of rod deserves the Kudo.’ Then I caught a fish on it.”
Along with the 12ft Tenkara USA Iwana, which received an award in 2012 as a Best of Show at IFTD, the Rhodo is the second award given to a tenkara rod by the mainstream industry.
Dave has been doing tenkara for probably longer than anyone else in the USA, and his latest book “Trout from Small Streams” has a terrific chapter on tenkara.