Tenkara One Fly V. The Marginal Benefits of Multiple Flies 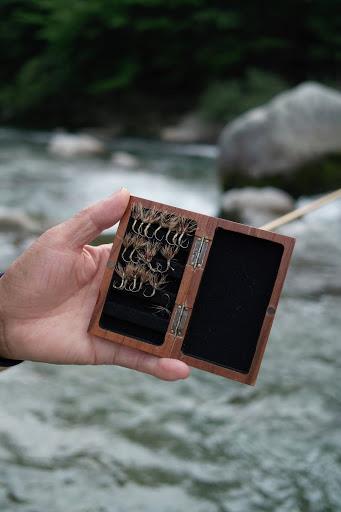 The “One fly” concept of tenkara – in which it is observed that most experienced tenkara anglers in Japan stick with one fly and don’t change it all the time, and that just about any fly can work – is a difficult one for most people to embrace. It is also a concept that has sparked a fair amount of debate within the tenkara community; some of it by folks misinterpreting the message as “you must use one fly”. But really, all this concept brings to us is a different way of thinking about fly-fishing. It is just like tenkara, it brings us an entirely different way to think about fly-fishing.

When I first learned that tenkara anglers in Japan were only using one fly pattern, it absolutely changed my fly-fishing life. It simplified it by telling me I could reduce my fly choices considerably. And it liberated me from second-guessing what fly to use and from consulting hatch books and locals for what flies I should use. And, that’s why I’m passionate about sharing this concept. Not for sake of purity or tradition, but because I have found it works. At least it works well enough to keep my life simpler and keep me from second-guessing my fly choices or worrying about what fly pattern *might* work a *little* better.

I can not say whether one fly will always work, in fact I have been challenged and talked about that in this video. But over the last 4 years I have fished throughout the US and other countries with some of the most experienced anglers around, and to be honest have not yet seen a noticeable different in the numbers of fish caught.

So, if you’re getting into fly-fishing or have been at it for decades, just know there is a different way to think about fly-fishing, fly choices and fly selection. You can ask yourself, is changing flies and second-guessing your fly choice worth the *possible* marginal benefit it brings over sticking with one fly pattern anywhere, anytime?

5 Responses to Tenkara One Fly V. The Marginal Benefits of Multiple Flies

« Amago on tenkara, by Discover Tenkara Do NOT throw your tenkara rod in the water »