Tenkara not a fad, declares Kreh

Three years ago, on January 22nd, 2012, I rode an elevator with the legendary fly angler Mr. Lefty Kreh. In the 30-second elevator ride I was able to ask Mr. Kreh what he thought of tenkara, and his response was, in short, “I think tenkara is a fad and it won’t last long.“. I wrote about this experience. Within hours the post went viral, with nearly every fly-fishing blog reposting it in the following days and, by my estimates, well over 700 comments being written in response.
Fast-forward to January 24th, 2015 and we officially have a change in the status of tenkara in the fly-fishing world. On that Saturday morning we were getting ready for the Fly Fishing Show in Somerset, when Mr. Lefty Kreh appeared in our booth looking for me. Oh, oh…was I about to get an earful for publicly writing about our conversation? Not at all. Mr. Kreh said he wanted to talk to me about our conversation three years earlier, to “clear the waters” as he put it, about his comment on tenkara being a fad. 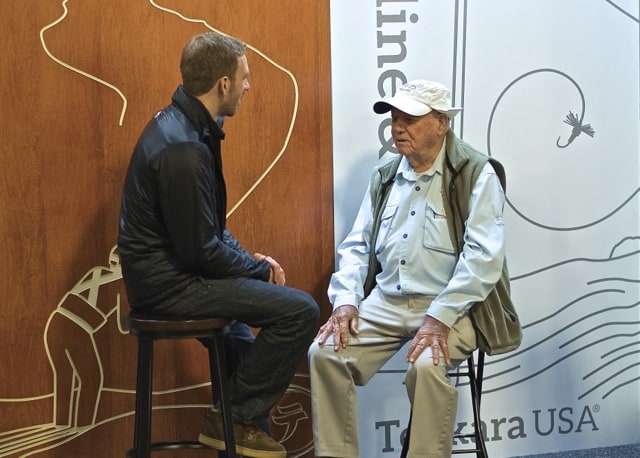 I confess, I had wanted to talk to him in the years since but never felt very comfortable approaching him. I never felt there was any animosity between us, but he is Lefty Kreh, a celebrity usually surrounded by many people. I was delighted to see him coming over. He sat down and we chatted for a good 20 minutes. Those around me will tell you I had a smile from ear to ear, Lefty, after all, is an angler I have looked up to since I started my career in fly-fishing, and I rejoiced at the chance of chatting with him for longer than 30 seconds. Two of my favorite things about having created a business in the fly-fishing industry are that I can talk to like-minded people all the time, and that it has put me in touch with those I had looked up to since I first learned I could imitate bugs with hooks and feathers.
Lefty told me that in the several decades he’s been fly-fishing he’s seen many things coming and going, so tenkara could have been one of those. But, he has had a change of heart and has been looking into tenkara a lot and “no longer think[s] tenkara is a fad”. In fact, he said, tenkara has “many great applications, particularly for the trout angler and for teaching people how to fly-fish.”
I was particularly delighted when he told me we have a great website and that he’s been spending a lot of time looking into tenkara right here. He knew a lot about tenkara, and could tell me about the knots and the flies, and more. And, yes, Lefty has fished with tenkara and has been experimenting with it too.
By far my favorite part was when he told me:

“make sure to keep it [tenkara] simple; you are doing a great job, just continue to keep it simple.”

» About tenkara, About Tenkara USA, Tenkara Community, Tenkara Experiences, Tenkara in the media, Tenkara industry » Tenkara not a fad, declares...
fad, Lefty Kreh, tenkara is not a fad, tenkara+

11 Responses to Tenkara not a fad, declares Kreh

« If you know… a fun infographic Radio Interview »