It is my first time in North Carolina, and I’m loving it. 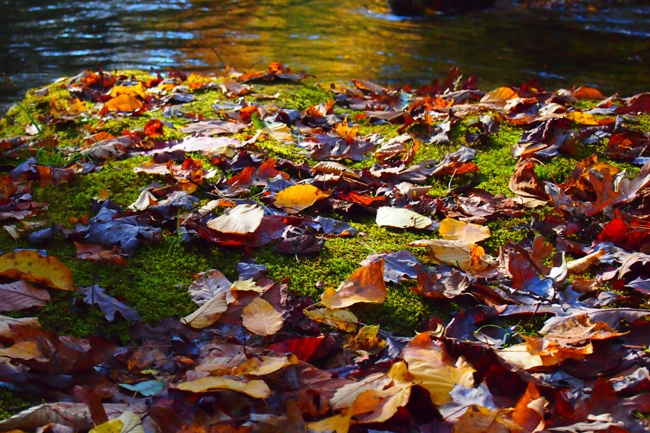 I had been meaning to take this trip for quite sometime to familiarize myself more with Eastern waters and spend time with our dealers in the area. Tomorrow morning (Thursday, Oct 18) I will be speaking and doing a demo at Headwaters Outfitters, in Rosman, NC. On Saturday I will be speaking and holding a clinic at Mossy Creek, in Harrisonburg, VA. If you are near these areas, I’d love to see you.

Before I share today’s pictures I have to share the highlight of the day. Pete, one of the guides for Headwaters, took me to some beautiful water today on the North Fork of the French Broad. Soon after we started fishing, I noticed a very large osprey flying to the tree near us, and perching almost over our heads, maybe some 40ft off the ground. I pointed it out to Pete. We watched the osprey for a minute, and then it started flying – DOWN!

I had been eyeing the pool in front of me, and intended to fish it…but so did the osprey. For the first 10ft of flight it kept its wings open and flew slowly, like a parachute really. And, then it turned into a torpedo, tucking its wings and pointing its legs towards the water. It struck the water like lightning. We watched it mesmerized; the osprey dove not 15ft away from us! A moment later it came out of the water with a 10 inch trout, likely a rainbow, in its grasp. The moment wasn’t yet over. As it took off, about 4ft in the air, the osprey lost its grip to the wiggling fish. As an angler, I could relate to the osprey. I felt bad for it.

Needless to say, I passed on the pool in front of me and also skipped the one above, the commotion and splash surely scared fish for quite a distance. The osprey also knew that and flew far downstream in search of another pool – a reminder not to spend too much time in one place. Unfortunately no pictures or video…I would have had the perfect angle, just perfect.

The fishing for the rest of the day was absolutely gorgeous, and the fishing superb. I have been told the Fall colors are at their peak, the air has been crisp, and cool. The streams here remind me a lot of many streams in Japan, more open than I expected and super clear too. I used the Ito in the beginning of the day and that worked very well. Later I switched to the 11ft Iwana and really missed the longer length several times. The fish were rainbows, healthy, and very feisty. Most in the 12-14 inch range. The first thing I did was to show Pete the techniques of tenkara. The first fish came when I was showing him the idea of stopping the fly and drifting it, stopping and drifting. That was the most successful technique for me today.

I am looking forward to a few more days out this way. 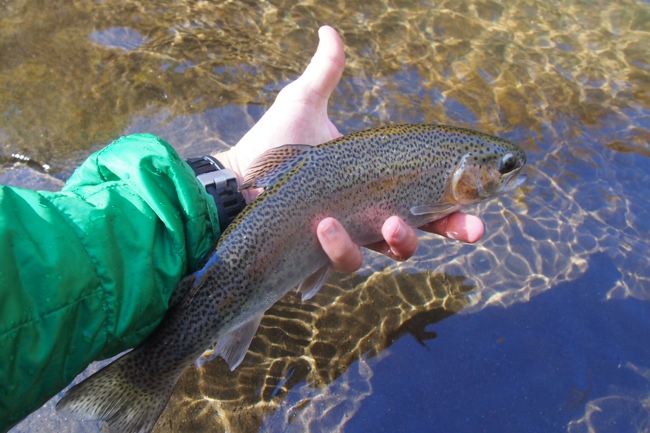 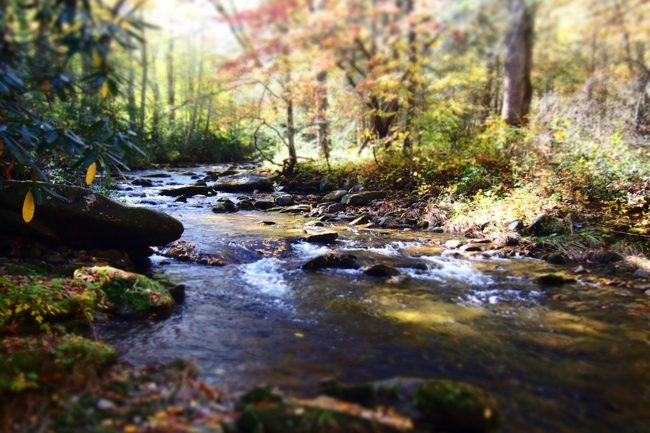 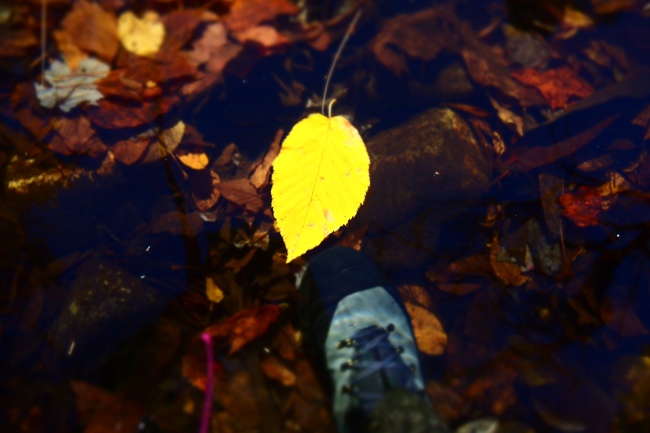 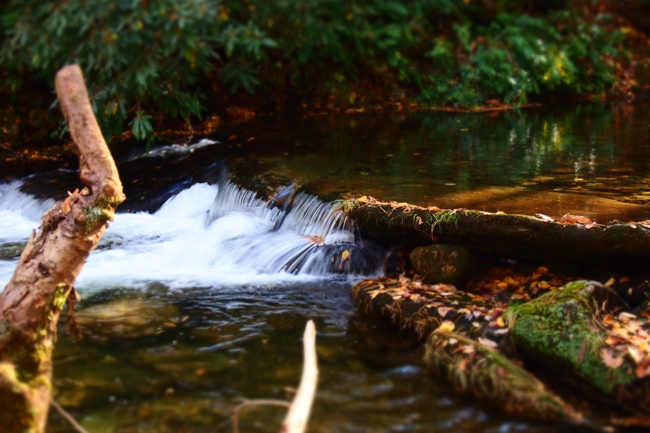 Here is the gorgeous fly box Rick Setina made for me, and which I have been using lately: 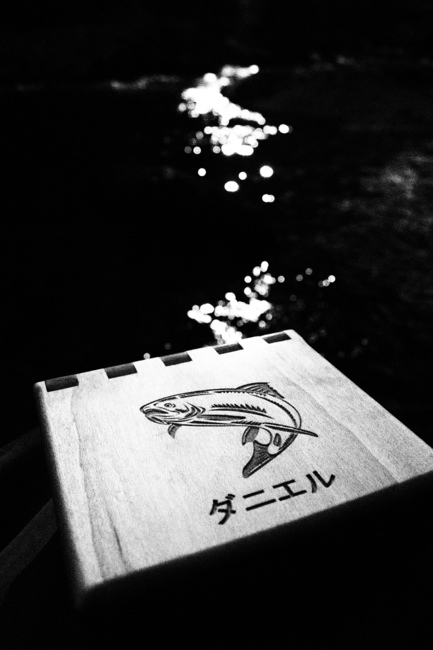 Toward the end of the day I got snagged on a tree behind me, I tried freeing it by using my rod, and it came free. What was most interesting was what came with it, not a leaf as had happened throughout the day, but rather a fly and tippet: 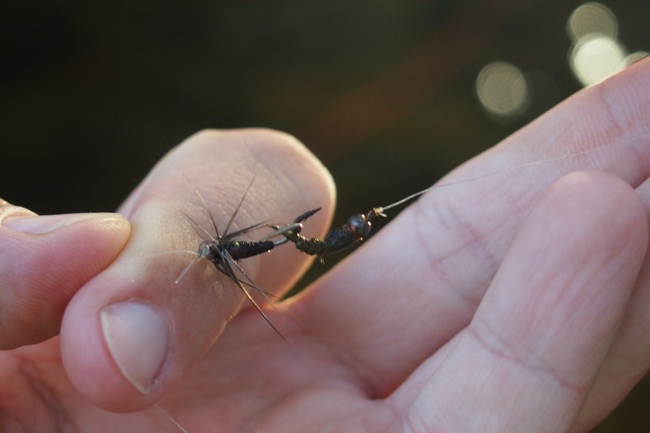 I fished alone in the afternoon, and soaked in the fall colors. I tried to pay nature back by picking up some trash on my way back to the car and learned of one more use for the angled tenkara nets. I had a long walk back, but was able to leave the net tucked in my wading belt with the cans inside: 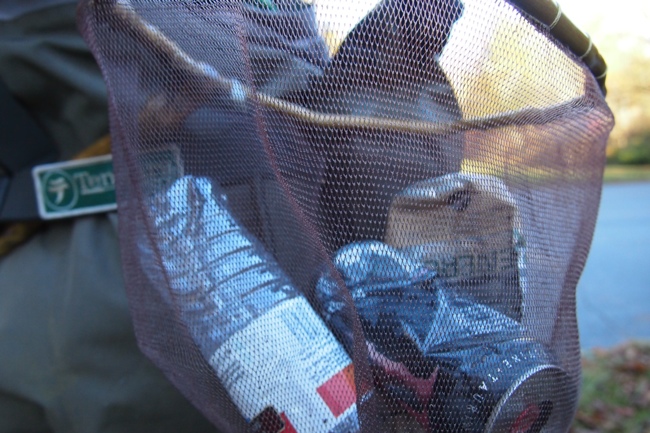 But that was not quite enough for a karma-neutralizer. I suppose I caught too many fish and still needed to get another scrape to balance it all out. I walked to the water next to my car for one last fish. As I came down the bank I tripped over and fell forward. Falling is not that uncommon, but this time it could have been real bad, as I fell with my neck right over a broken and very sharp branch! I thought it may have punctured myself badly, but there was not a whole lot of blood coming out. I took this picture to see how bad it really was. Wow, that was close. It could have been real bad. 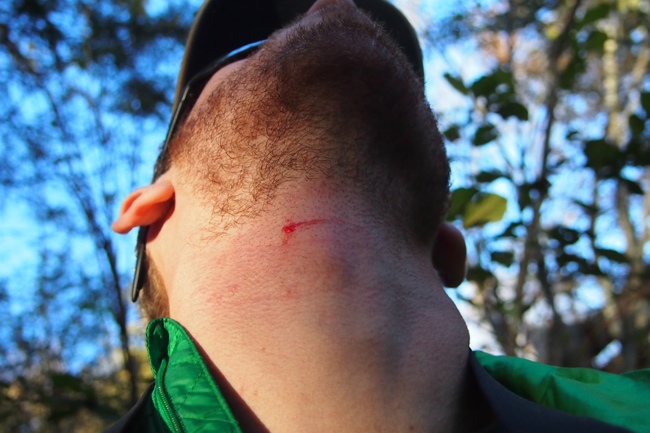