Educational Recreational Adventures (ERA) reports on the use of tenkara at their Spring Bread Fly Fishing Camp on the Crooked River, Oregon. March 25-27, 2010. Written by Jeff Gottfried.

Anglers ages 13-14 traveled with ERA from the Willamette Valley across the Cascade Mountains to the Crooked River of Central Oregon for three days of fly fishing for native red-band rainbow trout. All but one of the youth had participated in other ERA fishing expeditions so I concentrated my initial efforts on Ian Nakamura, the novice. Since I was excited to try out our new Tenkara rods, I decided to start Ian out on one of them. I soon found out that my choice was excellent.

Instead of spending a whole bunch of time teaching Ian to cast, I simply demonstrated a few casts with the Tenkara rod and then handed it to him. Within 15 minutes, Ian’s rod was bent into a major arc. He was onto a nice 12 rainbow trout! Soon he caught a larger whitefish that gave him a great fight. Ian was fishing a size 18 bead-head midge larve to start with but he also caught fish on a size 16 blue-winged olive. I was very impressed by his ability to make a drag-free presentation. 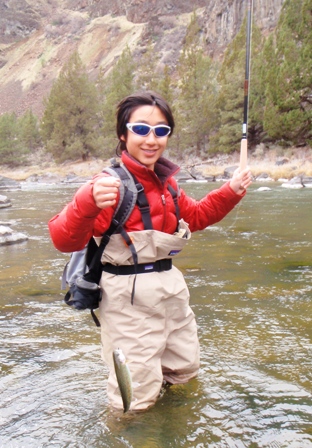 “The tenkara rods were a real eye opener for me since they simplified the process and allowed my young anglers to catch fish on their own and be independent of me much sooner than had been the case with traditional rods and reels.”


Other kids caught fish on traditional western rods with reels but after they saw me catch a few rainbows next to Ian, two other youth changed over and began to catch fish on dry flies. Zachary Babcock had not caught a trout when I handed him my 13′ tenkara AYU rod in the afternoon and told him to give it a try. He was soon able to make a sensitive presentation and hook up with the biggest fish of the trip, about 15″, on a blue-wing olive pattern. Everyone met with some success and it was only day one. 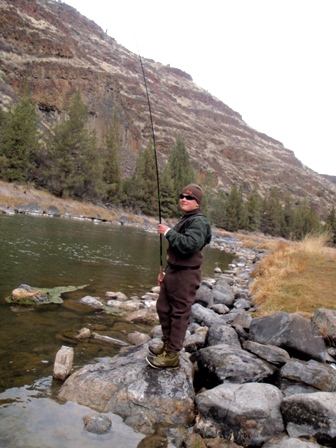 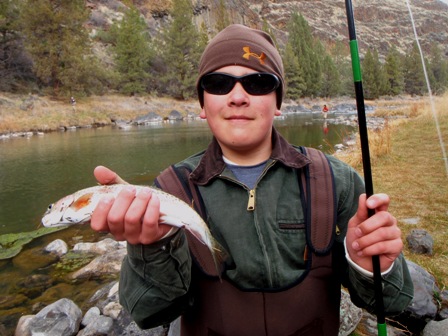 Zach and the reward

It got very cold and even snowed that night. We went to be early and awoke at 7:00 am and hit the river. Once again everyone managed to hook and land fish on both dries and nymphs. Over the three days, our group caught more than 60 trout. The tenkara rods were a real eye opener for me since they simplified the process and allowed my young anglers to catch fish on their own and be independent of me much sooner than had been the case with traditional rods and reels. Everyone eventually had personal casting instruction with rods and reels but that was after having caught fish on the tenkara rods.

ERA is planning on doing another Fly Fishing Camp on the Crooked River on May 13-15 (leaving the Willamette Valley after school on Friday and returning Sunday PM) with opportunities to fish tenkara rods during the famous “Mother’s Day Caddis Hatch.” This should be a blast. Adults are invited to join us if they bring a kid (or just pay for one). We are also available to take adults/groups on guided/outfitted trips that can also include food and transportation.

Other ERA/Tenkara opportunities include:
-Fly Fishing Camp with Sandy Parks and Recreation, Sandy,OR June 19-20
-We are accepting reservation for fishing trips for cutthroat trout (both resident and sea-run) in late May-early June. This will be an excellent tenkara trip on a small coastal creek.
-Fly FIshing and Freshwater Ecology Camp with Native Fish Society and Molalla River Watch, July 28-30
-Fly Fishing and Freshwater Ecology Camp with Opal Creek Ancient Forest Center, August 15-20

Please contact Jeff Gottfried at ERA with questions or for more information.