In the back of Dr. Hisao Ishigaki’s business card, there is a part that reads something like this:

“Tenkara is not tempura, it’s not karaage (fried chicken), it’s the Japanese style of fly-fishing”. 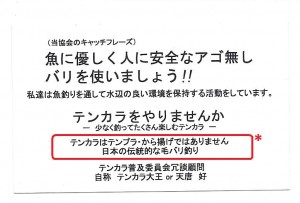 As Dr. Ishigaki’s humourous business card suggests, in Japan many non-anglers are not familiar with tenkara. It’s not their fault though, Japan has at least a dozen methods of fresh water fishing, and all these different styles – some of them very similar –  cause confusion even among anglers.  In the US on the other hand, there are fewer styles of fishing, and tenkara has just been introduced, so there is no confusion; on the other hand, there are some misconceptions about tenkara.

The two main misconceptions some American anglers [who have not yet tried it] have of tenkara are: “it’s ‘high-tech’ cane-pole fishing” or “it’s just like dapping”. My next business cards will likely say this on the back:

I should start by making a few statements, with which I believe most will agree, to define fly-fishing:

1) an artificial fly is used,
2) the line is what propels the weight-less fly forward, the fly itself has no weight to be cast any significant distance,
3) a specific casting technique needs to be performed to cast the line.

Tenkara is not cane-pole fishing: like cane-pole fishing, tenkara is what we can call a “fixed-line” fishing system, where the line is “fixed” at the tip of the rod, as opposed to a running line used with a reel. But, that’s where the similarities end. In cane pole fishing (or crappie fishing using telescopic rods) there is no casting technique involved and one does not use the line to cast the weigh-less fly forward but rather a weight and/or heavy bobber to place the bait in place. This is not necessarily because the technique is not available, but rather because one will find it quite difficult and not as pleasant to do so with a cane pole, or a “bream” or “crappie” pole. I know it! I grew up using those rods, and before tenkara, I tried them again for fishing with a fly. 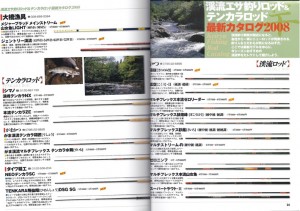 In Japan tenkara rods are sold right next to bamboo poles, keiryu rods, ayu rods,  carp rods, and a large number of different types of telescopic or otherwise “fixed-line” rods in Japan, yet no one thinks of tenkara as cane pole fishing. Tenkara is tenkara.  A tenkara angler, or one wishing to fly-fish, will go for a tenkara rod only, much like a fly-fisherman in the US will  go for a fly-rod if thinking of using a fly…though now he may go for a tenkara rod too. Originally tenkara rods were unsplit bamboo, and some are still made in Japan, but the quality of the rods was hundreds of times superior to any cheap cane-poles. It started with the proper selection of different types of bamboo to be used in different sections, and the bamboo then went through several months to years of proper treatment. Then it was finely crafted to be light, and hold thinner segments inside. Like a split bamboo rod, tenkara bamboo rods are art in its highest form.

From a technical as well as aesthetic perspective, cane poles are much stiffer than a tenkara rod and make casting a light line almost impossible and casting a heavier line a chore. Casting a heavy line would also defeat the purpose of the delicate presentations which make tenkara a very effective style of fly-fishing. The softer rods, or the crappie rods, on the other hand are (a) “whippy” at the tip and the inability for the rod tip to stop quickly inevitably dampens the energy transfer from rod tip to line, and the line will not roll out. A bit like fly-fishing with a soft spin rod, or a very cheap soft western fly-rod. (b)They are also heavier than a tenkara rod so casting a whole day becomes less enjoyable. The grip found in a tenkara rod is also made possible by its thinner diameter and it helps balance the tenkara rod and make it more comfortable for hours of casting. (c) There are a few other distinct design differences, such as diameters and taper, but that’s also for another post. Let just say the construction of those rods is inferior to tenkara rods and that usually translates into more breakages too.

Tenkara is not dapping: Dapping can be considered a style of fly-fishing, at least by our definitions, but tenkara fly-fishing is not dapping. In his book, “Dapping, the Exciting Way of Fishing Flies that Fly, Quiver and Jump”, Mr. Robert H. Boyle writes about dapping, “Dapping ranges from the ancient method of simply touching the fly up and down — dap-dap-dap — on the surface of the water, to the modern (well, since the early nineteenth century) use of blowline…by which the wind carries the fly to fish.” Dapping may be seen as but one of the techniques that can be practiced with a tenkara rod, just as it may with a western fly-rod, though a short rod would make it more difficult. Limiting the impressions of tenkara to dapping is like limiting western fly-fishing to dapping too. Tenkara is much broader than that.

Yes, both use very long rods…and  a fly. Dapping has its own gear, in fact, dapping rods are commonly much longer, as long as 40ft, and modern “dappers” commonly use reels too!  Again to quote Mr. Boyle, and I hope he won’t mind for I just want to distinguish the styles of fishing, “you’ll need a reel with a fast retrieve to bring in a fish and keep the blowline from getting wet….All together, my dapping rod and fully loaded reel weigh a shade over two pounds“!!! …Yikes… our heaviest tenkara rod weights 3.6 oz. Dapping has its own “casting” techniques too:  ones only uses the wind to blow on the line, then drops the fly in place and maybe imparts some life to it. Interestingly in his book Mr. Boyle says, “when there is no wind whatsoever, I’ve thought of buying a giant battery powered electric fan and putting on 20 feet of blowline”. I’d assume it’s a bit of a joke, but 2lbs of gear and a fan to go with it just couldn’t go any further from the style and philosophy of tenkara.

I do not hope to put cane-pole fishing or dapping down, or impose on them any misconceptions. But, it is a misconception, and a misrepresentation to compare them to tenkara, particularly if one has not yet tried tenkara. This will only become clear once you have a chance to try and practice tenkara, but I do hope that this clear the cane-pole and dapping comparisons.
If you need further insights, just read our forum, which lists the experiences of several new tenkara anglers, whom I know will agree that “tenkara is no cane-pole fishing”.

» Tenkara » Tenkara is NOT…
cane-pole, dapping, Ishigaki, tenkara is not, tenkara+