“Tenkara is not dapping” campaign 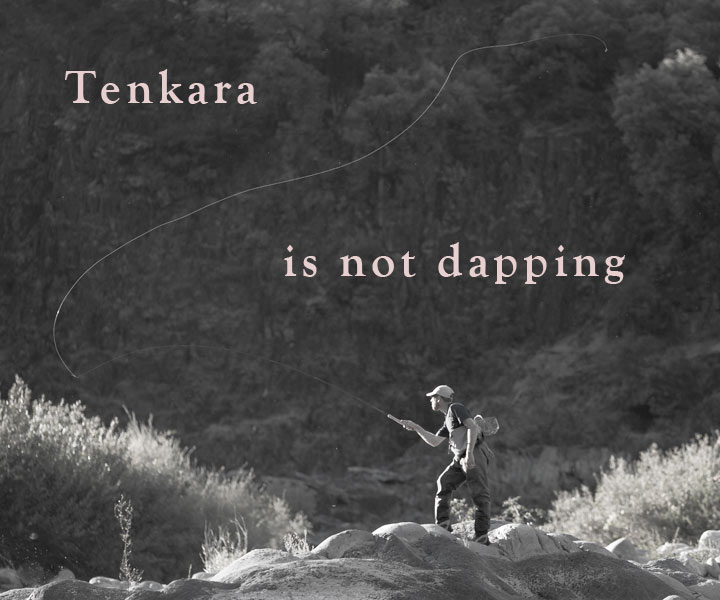 The most common misconception about tenkara it that it is just dapping – that because the line is tied to the tip of the rod, it is only lowered onto the water instead of cast as is done with western fly casting. At the recent fly fishing shows we attended, it was clear that a lot of people had heard of tenkara, at least in passing at this point, but a vast majority would say, “yes, I heard about it, it’s that dapping technique from Japan…” This assumption is all to common among those who have never tried it, but luckily very quickly dismissed by anyone who has or who has seen it in person. I pleaded the organizers of the Fly Fishing Show to give me sometime on the show’s ponds to demonstrate the casting techniques, and that was a huge eye opener to many attendants.

As the first company outside of Japan focused on introducing the method to others, a huge part of what we need to do is education of the public. In this stage in the game, we will be focusing on a new campaign: “Tenkara is Not Dapping”.  The first two products of the campaign are based on the photography and video clips taken by Brian Flemming.

We’d love to count on your help to post pictures, and videos showing that it is a method of fly fishing where casting is involved. Please inundate the web with the message that “Tenkara is not dapping”!

2 Responses to “Tenkara is not dapping” campaign

« Maruhachi – A taste of old Japan in a mountain ryokan Image for the day: In Search of Tenkara »