Tenkara in the Media

We still don’t even have a press page, yet articles on tenkara and Tenkara USA continue appearing in the media and are becoming more common in the US and abroad. Now, to catch up with recent mentions of tenkara in the media, there has been some great coverage recently. Thanks to those who have written about tenkara and to the magazines that have embraced talking about something so off the mainstream.

A couple of months ago French guides Yvon Zill and Guillaume Durand went tenkara fishing in New Zealand, the land of enormous trout. They submitted an article with excellent shots of tenkara fishing to the New Zealand Trout Fisher magazine. One of the shots got featured on the cover (below)! They had some other incredible shots of 20″+ in the article. Those guys have been doing a great job at spreading tenkara in France, and now in NZ! Checkout this shot: 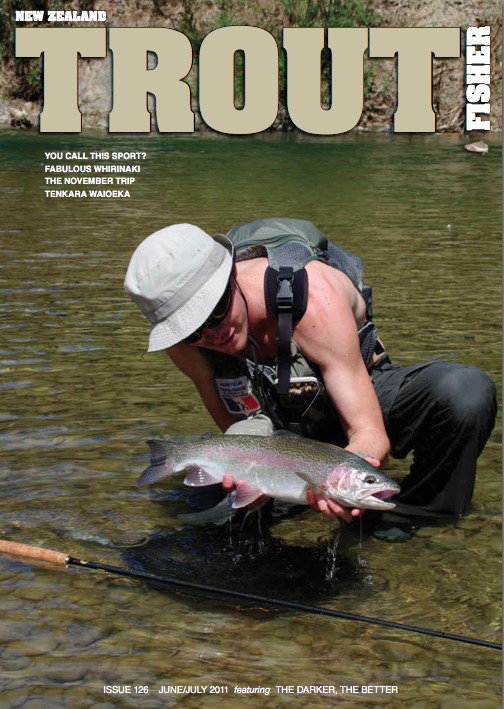 Then, our friend Tom Sadler was featured in a beautifully written story, with great photography, in Garden and Gun magazine. Despite the magazine name, this was one of the best written, and most accurate pieces on tenkara I have read so far, and the images taken were very fresh. Definitely check out the article, and the photo gallery.

Just yesterday I received my copy of Field and Stream magazine, which finally featured an article on tenkara, well written by Joe Cermele. I knew there was an article on tenkara in there somewhere, the first time I browsed the pages I couldn’t find it. And, then it struck me. The “cover” for the article was an anime-style illustration – very funny. The cover says, “How a reelless 13-foot rod is revolutionizing flyfishing”. The author went on to say, “because tenkara rods are so sensitive, I instantly felt the trout in that seam pick up the fly.” Nice! 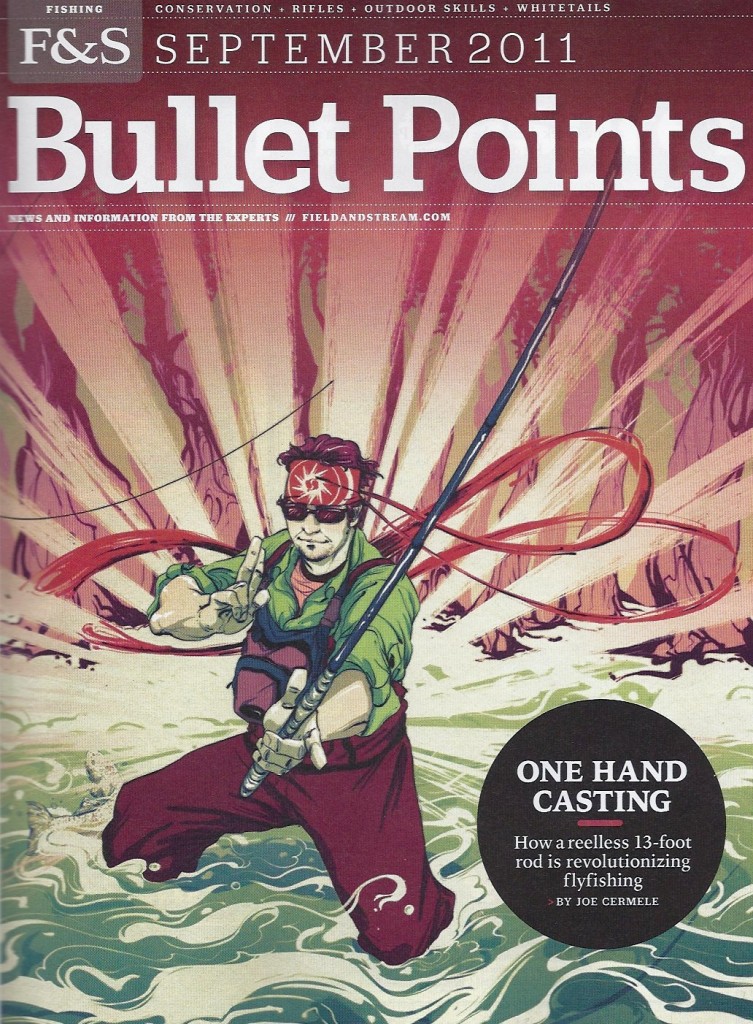 A couple of weeks ago, right before the Tenkara Summit, I saw a post on Twitter indicating Gordon Wickstrom’s article on the periods of fly-fishing had been published on no less than the Orvis’ blog. If you read the article you’ll see that Gordon splits fly-fishing history into 6 periods. I suspect this article was partially inspired by tenkara, and Gordon asserts that we’re currently in the “New Period” of fly fishing, which is defined in part by tenkara and our introduction of a simpler method of fishing “to these shores”. I had read this article a few times before, and have the “periods of fly-fishing” table on display in my tenkara museum. But, I had a good smile when I saw it posted by Orvis. So, I posted on Twitter that, “Orvis may have just accepted that the new period of fly-fishing is marked by tenkara”, not missing a beat the folks at Orvis responded, “@TenkaraUSA I wouldn’t go that far…. 😉 “. I enjoyed that exchange.

Ah, and there is Trout Unlimited. They featured a very nice article on their Trout magazine about tenkara. If you’re not a member of Trout Unlimited, please join them in their efforts to protect trout waters. Trout Unlimited has several noteworthy programs, and we support them through our 1% for the Planet commitment because of their efforts. Talking about 1%FTP, they also just released a recorded interview/podcast with me about tenkara and our 1% for the Planet commitment, in which we pledge to donate at least 1% of our revenues to environmental organizations: Podcast

And, then there was a new article at American Angler magazine, a mention of tenkara by John Gierach in his new article for Fly Rod and Reel (disclosure, I have not yet read this one, but have heard a few people mentioning it) and one for Outdoor Bozeman….

Well, a lot of catching up to let you know where tenkara is being featured. I’m thankful for all those who have taken an interest in tenkara and are helping spread the word on it. I think our sport can only gain from the acceptance of tenkara into the fly fishing communities. Maybe next time we can have tenkara on the cover of one of these mags!

2 Responses to Tenkara in the Media