We are absolutely ecstatic this month! Tenkara has reached the mainstream through the words of 3 of the most respected anglers and writers in the US: Lisa and Ralph Cutter and John Gierach. These articles were published in what I have come to perceive as two of the most progressive magazines in the industry: California Fly Fisher, and Fly Rod and Reel. these magazines have been ready to tell their readers about tenkara, a new development in the US, which I think proves their editorial integrity and that they are concerned with telling their readers what is new in fly-fishing as opposed to just pushing their advertisers’ wares. Kudos to these two magazines.

Ralph & Lisa Cutter wrote a great article on their first experiences with tenkara for California Fly Fisher, with a beautiful illustration of a mayfly landing on a bamboo stalk done by Lisa. Getting to meet Ralph and Lisa was quite awesome in itself. I had known about the Cutters’ work for a long time, and always suspected they would probably enjoy learning about tenkara. One day, suddenly and unexpectedly, I received an email from them. Ralph says that Yvon Chouinard was visiting with them for a couple of days, and Yvon kept talking about tenkara. With so much “tenkara this, tenkara that”, Ralph couldn’t resist and got in touch.  It just so happened I was in the Sierras and would be going past their place on my way back home and also had some rods in the trunk of my car. I personally delivered the equipment, and gave them a brief lesson. As they attest in their article, there is more to tenkara than is first expected, ” the few videos and descriptions of tenkara I had seen prepared me for a lesson in dapping and high sticking.However, when Daniel made a crisp, tightly looped cast and hit a fist-sized pocket 30 feet away, I was incredulous. His line, nothing more than 18 or 20 feet of 16-pound fluorocarbon leader tied to a few feet of 5X tippet, was effortlessly lifted from the water by his 13-foot rod. Only the fly and a few inches of tippet remained touching the film. It was a perfect dragfree presentation . . . more perfect than any Western fly rod could ever approach in that situation.” A couple of weeks later my friend Marty and I had the pleasure to fish with them for a couple of days, what an awesome couple of people! My favorite quote from their article, ” I can’t imagine ever approaching a small stream with conventional fly gear again.” 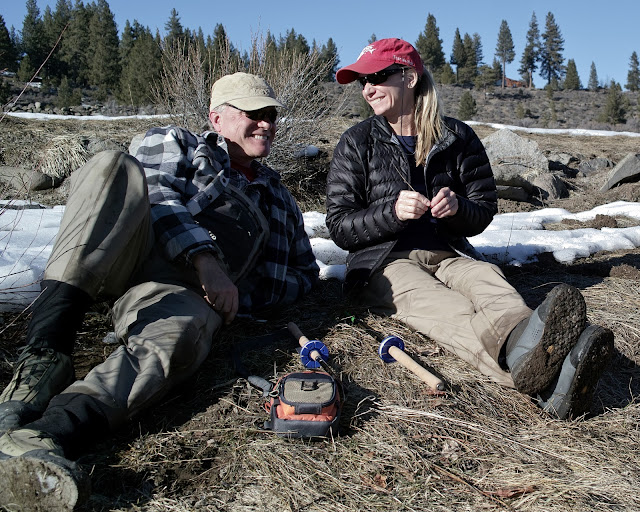 Ralph and Lisa Cutter on a rest at midday by the Truckee River – all their gear between them.

For the many months since I met John Gierach and Ed Engle for a few days of fishing in Colorado, I have been anxiously anticipating John Gierach’s words on tenkara. I had been longing to see his eloquent and characteristic writing illustrating tenkara to his readers. And, I was not at all disappointed to read his 4-page article for Fly Rod & Reel magazine, which is currently arriving to subscribers and should be in newsstands soon. Through his article I was able to relive my experiences with two anglers I have admired for a long time,  Gierach himself and Ed Engle. In turn they were able to share their first-hand insights on tenkara with their readers. Ed’s article, published right after the trip for the Daily Camera can be found here. The article did tenkara great justice. My favorite quote in the article, “I’d sometimes giggle out loud at the long reach I had and the beautiful drifts I was getting in normally difficult pocket water.” 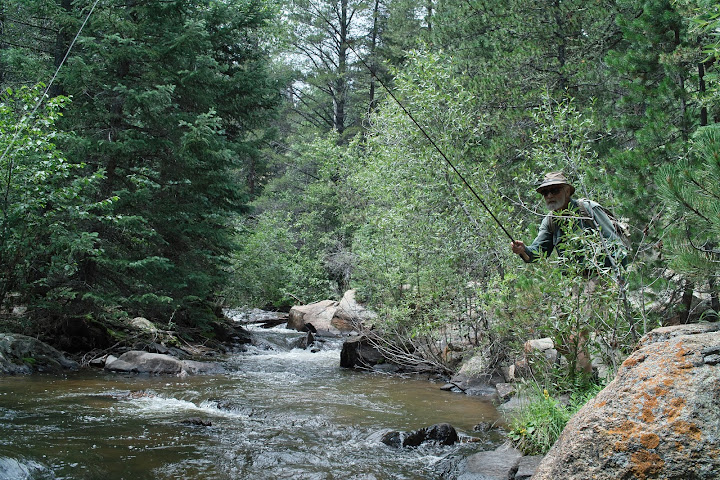 I think the Cutters and Gierach’s readers deserved to learn about tenkara. After all they often talk about mountain stream fishing, and how could you ignore tenkara when that is one of your favorite kinds of fishing?  It’s awesome that they have been able to see why tenkara is here to stay.