tenkara fishing in the Driftless region, a trip report (Part 1) 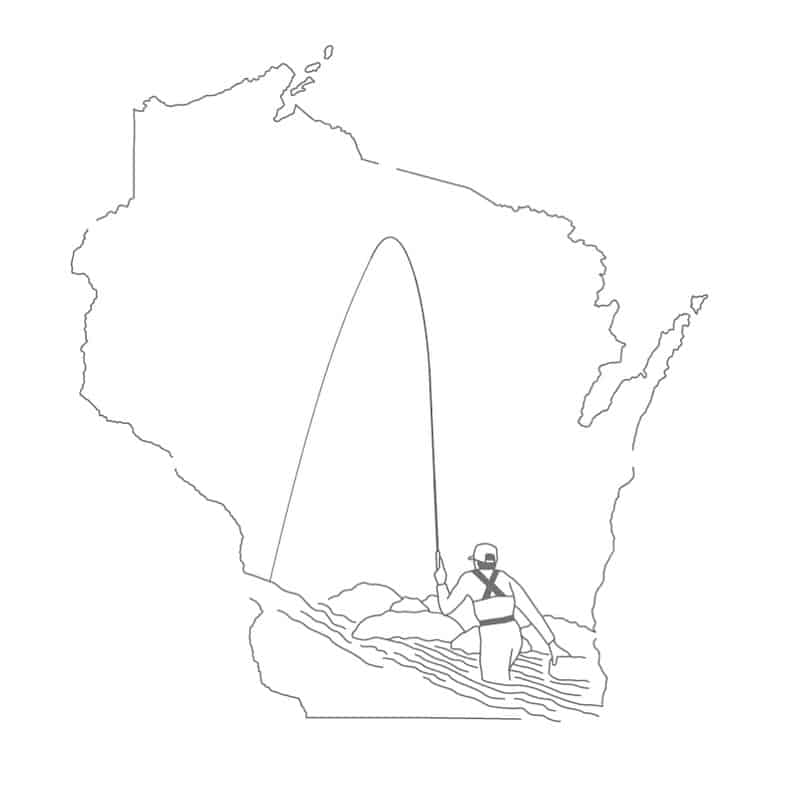 Last Friday I flew to La Crosse, WI, the heart of the famous Driftless region of Wisconsin. I came to the area to participate in the Midwest Tenkara Fest, organized by Badger Tenkara. This was my first time fishing in the area. And, although the Driftless had been on my radar for many years, it took me a while to get here. It was a phenomenal region to fish and I already can’t wait to return. Tenkara is made for the Driftless, where good presentations and drag-free drifts are the key to catching trout. 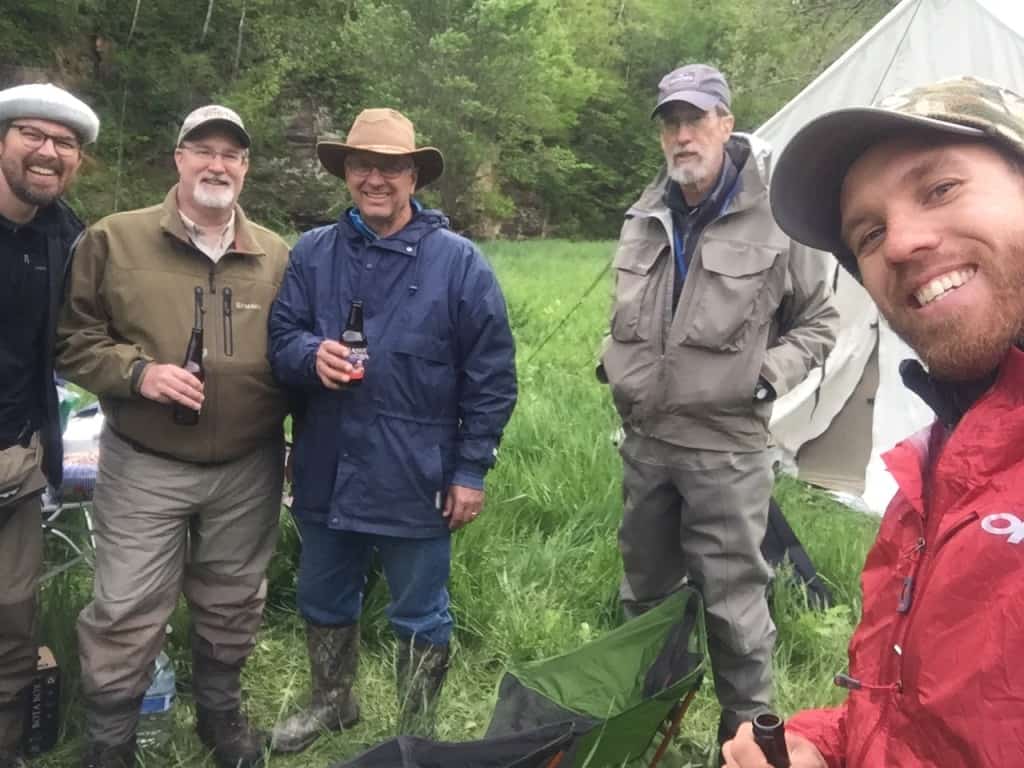 A few days before coming to the Driftless I received an email from fly-fishing author Jason Randall who had learned I would be in “his area” at the same time he and Ed Engle. Jeremy Shellhorn and I were planning to camp around here anyways, so we decided to camp with Jason and Ed. On Friday we fished the stream that ran by the camp. 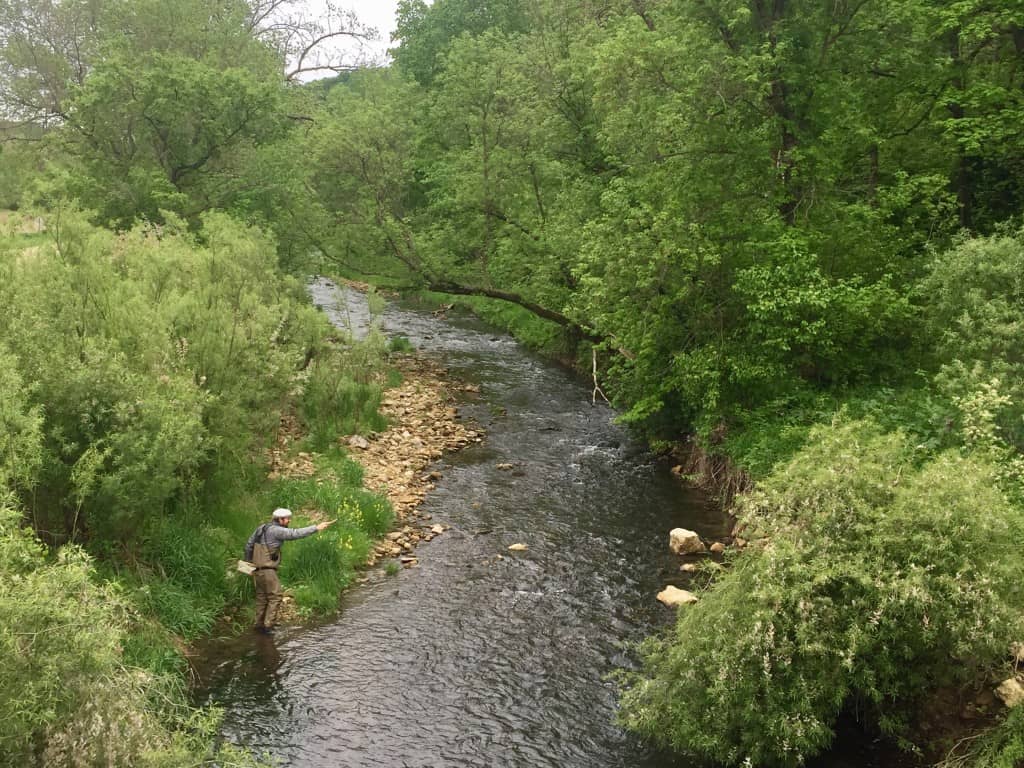 I absolutely loved that stream. In a very short distance the spring-creek changed from looking like a mountain-stream to a slower meadow water, to typical limestone spring creek. Despite the rain earlier in the day the stream was running very clear.

Although the stream we fished is no secret, there is no need to mention specific stream names here. The Driftless regions has over 500 miles of publicly accessible trout streams, so you wouldn’t have a problem finding waters. 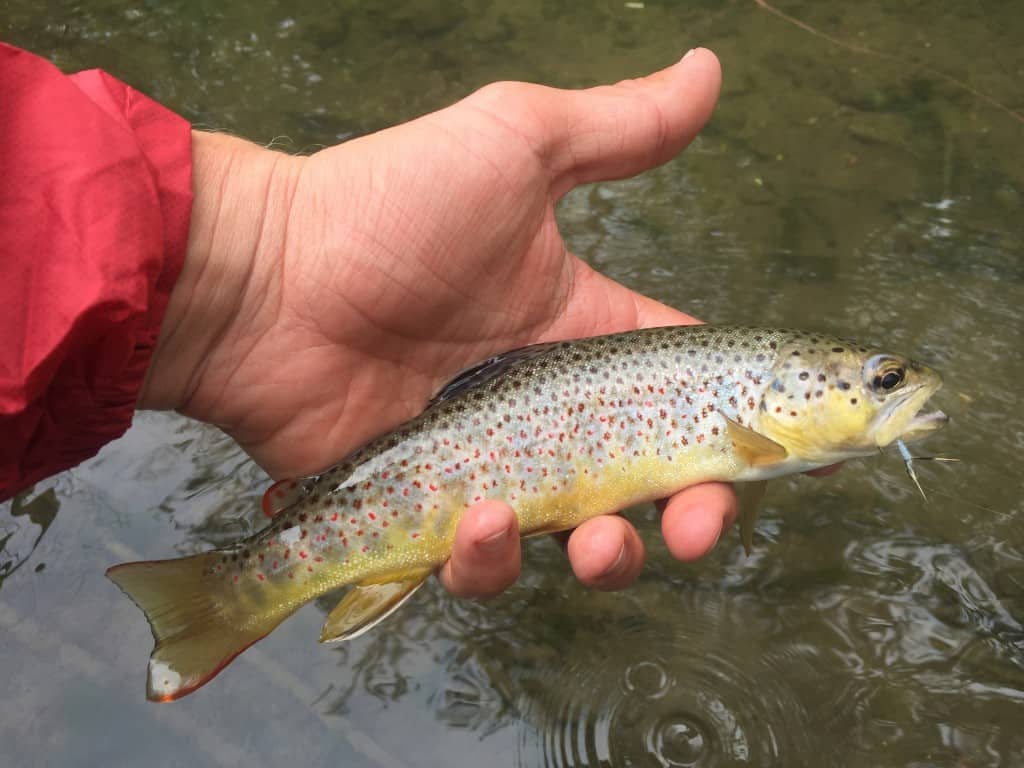 Another very cool thing, as is usually the case when fishing for trout in different areas, was the coloration of the brown trout we were catching. More specifically most of the trout we caught had a red coloration on their tail and a well-defined red mark on their adipose fin. It was fun to notice that when Ed Engle pointed it out. 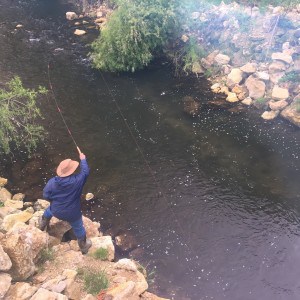 After fishing for some time and getting my own fishing fix, it was time to get Jason Randall to experience tenkara. He had been out with someone before, but they really just fished it like a fly rod. I talked to him about the differences in the way we normally fish with tenkara, just as keeping the line off the water for better presentations. Shortly after his first couple of casts Jason hooked into trout, and then caught a few more. 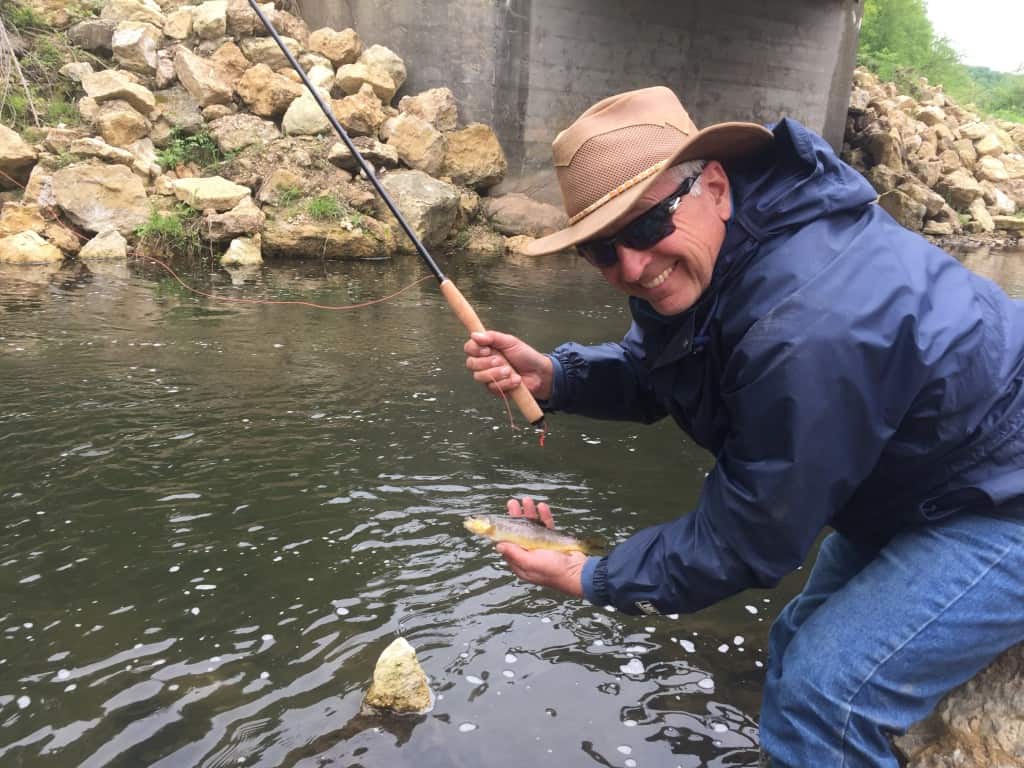 That’s the thing about tenkara, when it is fished “the tenkara way” it will hook even the best anglers into its advantages; but if it is just fished like a western fly-rod then there is little to keep them using it.

Then Jason turned his buddy Tom into tenkara. Tom was just a tad skeptical about it to begin. After Jason caught some fish he insisted Tom try it. I hiked down to where Tom was and gave Tom the rod. On his first cast he hooked a trout, and immediately exclaimed, “I like this”. And thus we had another convert. 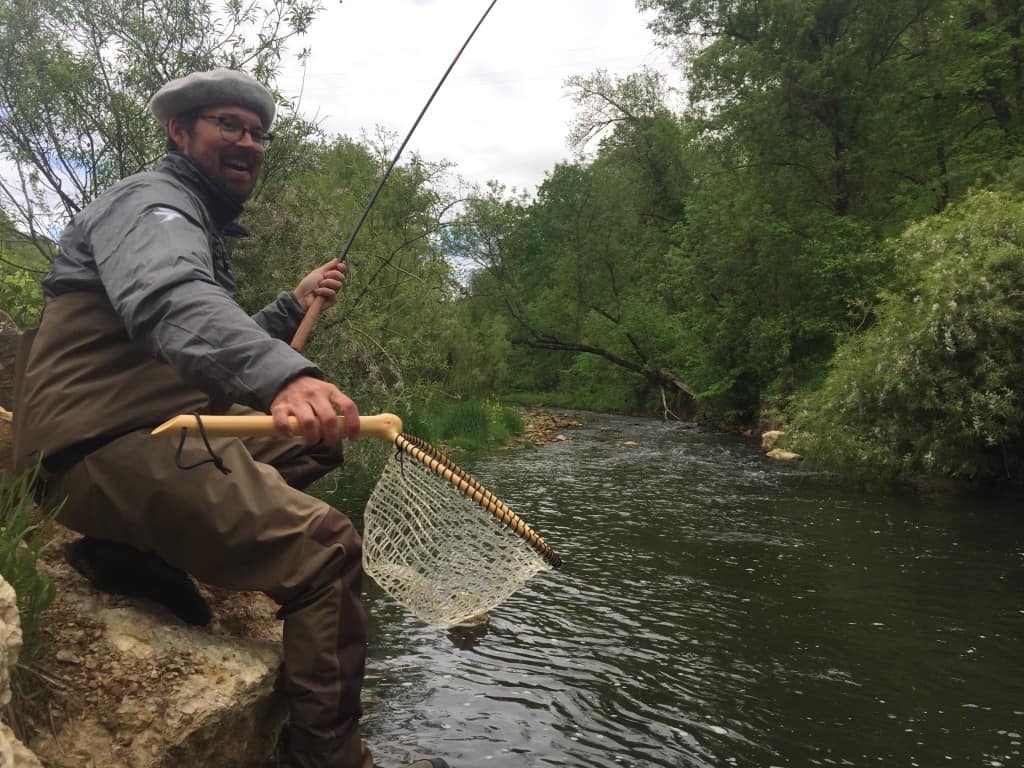 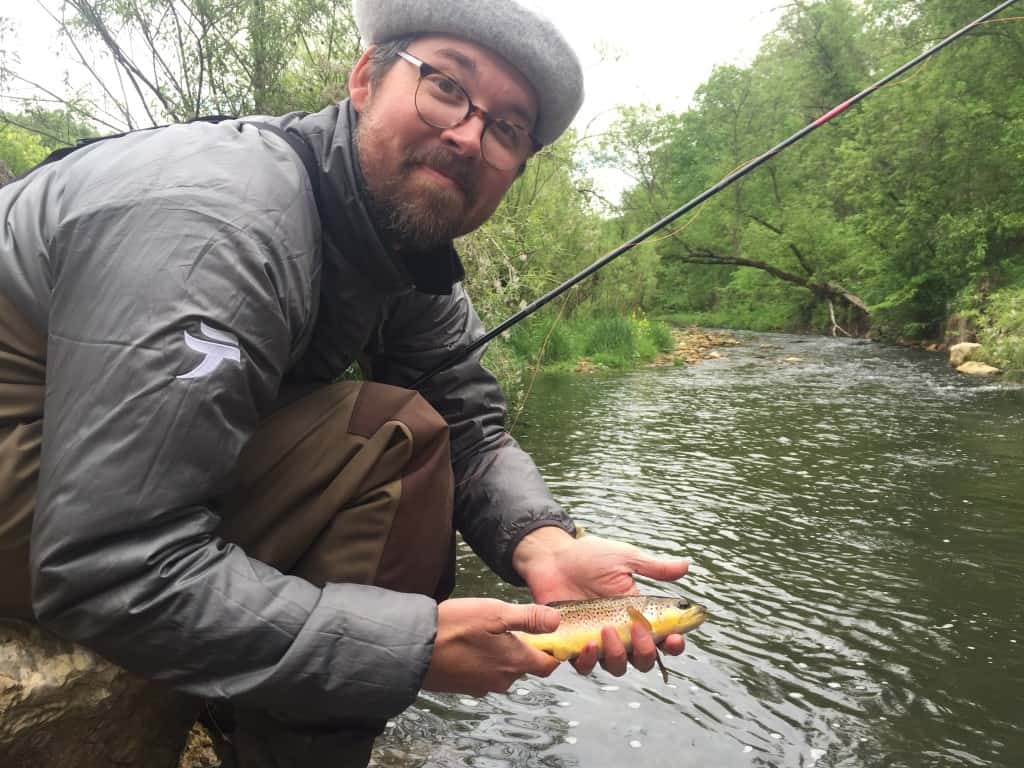 Of course, Jeremy also hooked a bunch of trout that day. And, of course, the big one got away. After dinner and before it got dark, Jeremy went back to the water close to us and caught some more fish to cap the day. Then he hooked what would likely have been the largest fish of the day, he played it well but the hook eventually came off. Well, here is a video of one that didn’t get away.


I have to go visit a supplier in a minute, and then catch a flight, but will see about posting some more information on the Driftless later. On Sunday we got to fish with tenkara guide Mike Warren and also Matt Sment in a completely different kind of stream. You can see a short video I made on Mike’s guide page here.

» How-To's » tenkara fishing in the Driftless...

2 Responses to tenkara fishing in the Driftless region, a trip report (Part 1)