Brazil…land of peacock bass, huge snook, and monster amazonic fish! Where could tenkara fit in?

Being originally from Brazil I had some sweet memories of my earliest days of fishing, where it all started, and they didn’t involve the largest fish. But, rather, some of the smallest, and what I now know are some of the most challenging! The small “lambari“, in Japanese called “tanago”.

This is where I first became familiar with telescopic rods. They were not tenkara rods, but rather crappie rods, and to begin with I didn’t use a fly, but rather some home boiled “pasta”. I remember many of these rods I acquired and the first experiences with cleaning them, or getting the pieces stuck. I learned. With the years  my fishing evolved and it seems to have completed a full circle: telescopic rods for lambari; spincast reels for tilapias; baitcasting reel, heavy rod and a hundred lures for some monster dourados and pintados in Pantanal;  a fly rod and reel that I managed to find in the scarce fly market of Brazil and used for tilapias, bass and trout after I moved to California.  And, finally, tenkara, which combined the most advanced stage of my fishing with the simplest and most enjoyable of my experiences as a kid. I kept the pieces I liked best: the casting technique, the weightless fly, the reading of water and finding of fish, and the experience of fishing without the encumbering of the hundred lures. 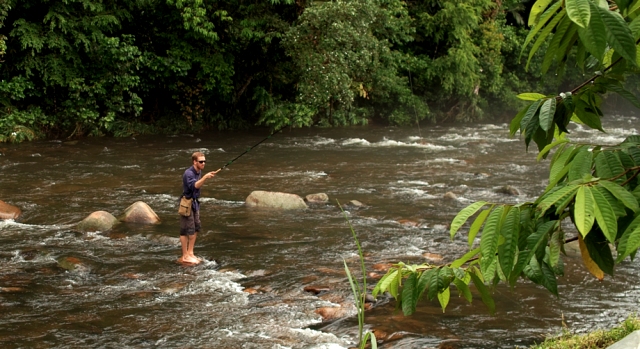 The appeal of the lambari I remembered most  was its taste! How delicious it was to catch several of these and have my parents fry them for us. Growing up the lambari were known as the “bait thieves”, as they often took our bait before our floats detected them.  The lambari always had a fame as being a VERY difficult fish to catch. This time, their reputation became the biggest part of their appeal, their appeal was the challenge. These fish are fast – lightning fast! And, what a sport it was to target them with a fly. Not for the fight, but for the chase and “seeing-if-I-can-catch-it”. Much like trout, the lambari are very wary and spooky fish, and they can be found in very similar water, small mountain streams, the type of water I take every opportunity to fish, be it in the Sierra Nevada, or even in the country known for its big fish. I’m glad to report, tenkara is the way to go for lambari too!

My dad says he couldn’t remember having so much success catching the lambari in a long time, even with the time it took him to learn a new method of fishing, and our limited time fishing due to heavy rains. One day some locals saw us in the water and probably found our  funny casting, the fact that we never seemed to replace our “bait”, and the quantity of fish we were pulling out of the water at least intriguing. Thinking it was an unusually good day, they pulled out their cane poles and bait and started fishing next to us. It wasn’t a counting game, but we easily outfished those who tried, and they soon gave up fishing next to us. The Iwana, the Ayu, and the Ebisu performed flawlessly!

Perhaps another story for another day, but, I thought I may as well write it here. Tenkara USA is introducing a foreign style of fly-fishing to the US, so it was quite interesting that two days before taking off to visit family, I was contacted by the person who is helping introduce [western] fly fishing to Brazil, Thiago Zanetti, owner of Fly Shop Brasil. Not only that, but he also happened to be from my home-town, Curitiba, where I’d be spending most of my time.  The market for fly-fishing in Brazil is barely an infant. When I started about 12 years ago I had to look VERY hard to find any fly fishing gear, I hiked looking down to find feathers for my flies, tied them without the use of a vise, and was happy fishing a rod, reel and line combo from 3M Scientific Anglers. Fly Shop Brasil  is currently one of the only companies giving access to quality fly fishing gear to anglers in Brazil, and they see the opportunity with tenkara. Since lambari are by far the most popular fish in my home waters, it seems like fly-fishing in Brazil could have in tenkara a useful tool to introduce anglers to the wonderful sport of fly-fishing. 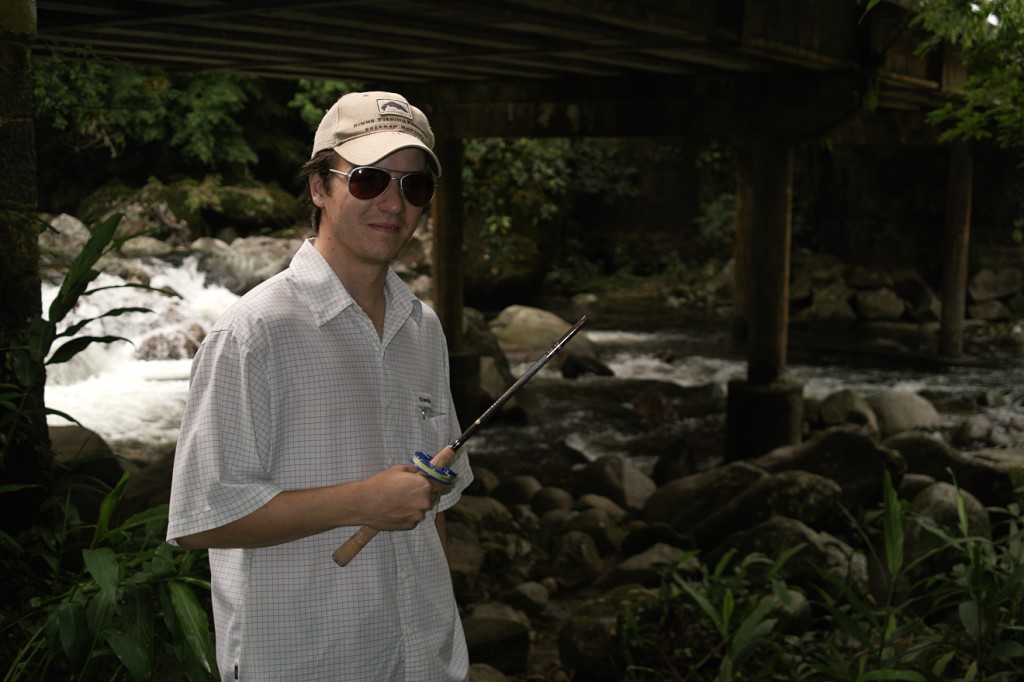 P.S. Trying to pack as light as possible for this 3 week trip, I carried very few clothes. Mandatory among them, of course, was the World Trout Tenkara USA t-shirt. I wore that shirt almost every other day, washing it in the sink after using it, and putting it out to dry so I could have a clean shirt when I needed it. After so much abuse, I’m glad to report the shirt has held up extremelly well and still looks like new.