Enter your email to get great content from Tenkara USA.

We never share your email with any other company, and we will not bombard you with emails (we send an average of one email a month)

Though there are a few different theories on the exact origins of tenkara, based on our research we strongly believe tenkara was originally and independently developed by these anglers and not passed on to them by other people. The original tenkara fishermen likely realized they could try to imitate bugs with feathers, silk, etc. At that point they quickly realized the great efficiency of using these flies (kebari) to “harvest” the abundant Yamame in the mountain streams of Japan. As opposed to using bait a simple fly would take seconds to tie and could catch several fish before ever being replaced.

The name tenkara, is written in Japanese Katakana characters (normally used for foreign words): テンカラ. Tenkara in Japanese – you may notice the symbol in our logo is the first character of tenkara: “Te”. The most commonly accepted meaning is “from heaven” or “from the skies”. However, the original meaning, and its origins are not known for certain. It’s thought that the word came about because of the way a fly softly lands on the water, and if looked from a fish point of view, it would be slowly descending “from the skies”. However, there are other theories for the name tenkara as the Japanese writing system allows for multiple possible interpretations of the word based on the sound for tenkara. The term tenkara became popular in Japan about 30-40 years ago; prior to that it was known as tenkara in most areas, but also commonly called “kebari tsuri” (literally “fishing with a fly”).

Here is another good resource on the history of tenkara by our friends at Discover Tenkara.

The First Record of Tenkara

Originally published here.
The original tenkara angler was generally illiterate, and truth-be-told, not at all interested in making a record of his time fishing. It took a British diplomat, spending time in Japan, to write on paper what has come to be accepted as the first record of tenkara. 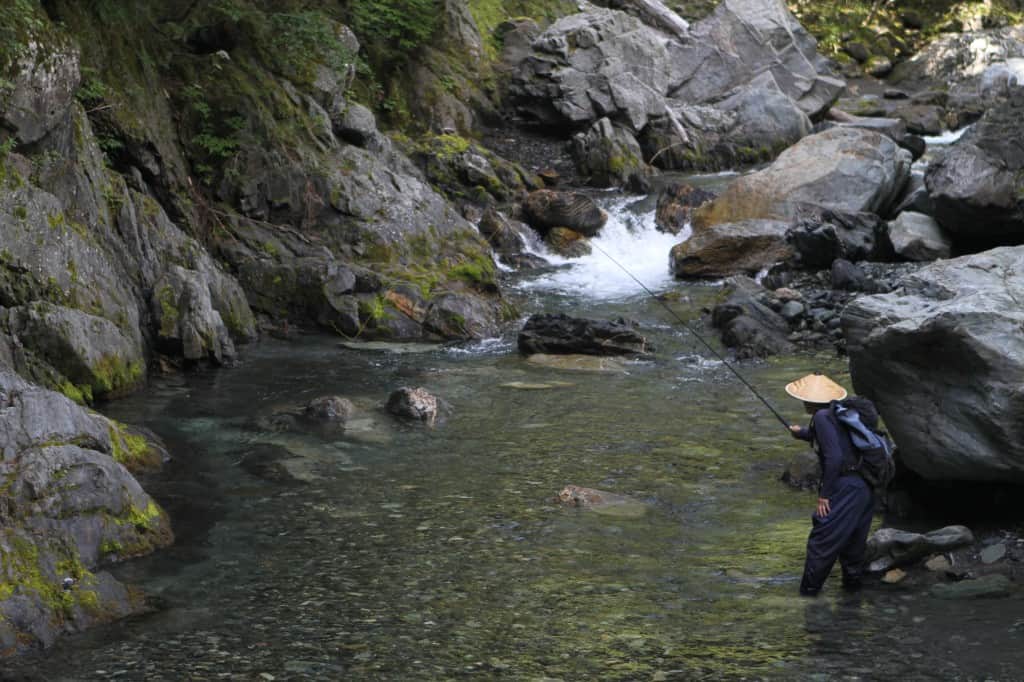 Mr. Ernest Satow, a British diplomat who spent over twenty years in Japan at the prime of his career and who was also a keen mountaineer, kept detailed diaries of his time in Japan. In his records of the years 1877 and 1878 we can find the first references to tenkara ever recorded. The references did not mention tenkara by name, simply the fact that flies were being used to catch the local trout.
Diary of Mr. Ernest Satow tenkara iwana kebari artificial fly
Based on the detailed descriptions in his diary, his records are the first that most likely indicate the observation of tenkara.

It was stated in Tenkara: Radically Simple, Ultralight Fly Fishing by Kevin Kelleher and Misako Ishimura, that the first description of tenkara was written by George Elliott Gregory on March 28, 1877. I do not believe, that Mr. Gregory was the first person to observe and write a record of tenkara. Mr. Gregory wrote a report titled “Japanese Fisheries” for the book Transactions of the Asiatic Societies of Japan. In his report, Gregory describes five methods of fishing practiced in Japan, one of which he calls ka-bari, where ka is a word for “mosquito” and bari is the word for hook. He writes, “The ka-bari is a simple bamboo rod. The line is used with a float but without any sink and the bait, as its name ka implies, is an artificial fly.” However, based on the vague description, and the fact that he does not mention the area where he observed this type of fishing, nor the species targeted, we can not be certain whether he was referring to tenkara or another method of fishing. Japan has an abundance of fresh-water fishing methods, at least two of which use flies (ayu fishing and tenkara). As tenkara was primarily practiced in the higher mountain streams, and ayu fishing much more common and at easier reach, it would be difficult for him to have observed the method. Furthermore, ayu fishing is normally referred to as “ka-bari”, not tenkara.

Mr. Satow, on the other hand, was in a good position to have witnessed tenkara first-hand. he frequently visited the areas far off the beaten path in Japan, and more importantly, spent time areas where tenkara would have been practiced. On numerous occasions he visited the mountains in what is now known as the Japanese Alps, with numerous mentions of Mt. Tate (or Tateyama) and Mt. Ontake. These areas are known for their cold streams and the long history of tenkara practice. 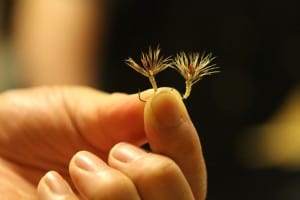 Then, during a period of about ten days in 1878, Mr. Satow wrote three passages on his experiences around Tateyama and Mt. Ontake:

July 23 1878: “…Height about 7500 or 8000 ft… Below the top large yellow ranunculus 3 & black lilies in abundance 4; then rhododendrons in flower… Magnificent rocky cliffs tower above us all the way to the first hut at Futamata, then the sides of the ravine slope more, and are generally covered with trees. The ice cold stream boils along over rocks of grey granite, & so cold is it that in crossing one bridge we actually feel the consequent change of temperature.”
July 24, 1878: “Last night we had for dinner capital fish called iwana [a native Japanese trout], caught in the Kurobe-gawa with a fly made of cock’s feathers, weighing about 3/4 lbs.”[2]
July 28, 1878:”Our coolies[3] were provided with bamboo rods and flies to fish for iwana in a stream near Kamidaki.”
August 3, 1878: …”Fish caught in this stream iwana and tanabira, and artificial flies are used. From here to the top of [Mt.] Ontake is 7 ri.”[Edited by Ruxton, Ian. A Diplomat in Japan Part II: The Diaries of Ernest Satow, 1870-1883. Lulu Press Inc. September 1, 2009

The full transcripts of Sir Ernest Satow’s diaries can be acquired and read in this pdf version of the book. The diaries themselves are a fascinating read for those interested in Japanese travel.

Ah, just as a reminder: tenkara was never practiced by samurai.
 
[1] From Japanese scholars, I heard of the existence of a book called “Diary of Climbing Mt. Tateyama”, but besides hearsay I could not confirm its existence. Diary of Climbing Tateyama (立山登山日記)
[2] [Note: the Kurobe river is not far from Tateyama, which is mentioned later in the same entry.]
[3] It is thought his guide in this areas was Mr. Shinaemon Toyama