Tenkara Flies of the Day I Tenkara Fly Swap

How I love our community of tenkara anglers, their enthusiasm and passion for tenkara inspires me to run Tenkara USA and try to make it better every day. As the flies of our second tenkara fly swapare put in the mail for the recipients, I will be featuring 2 flies a day on the blog. Keep coming back! 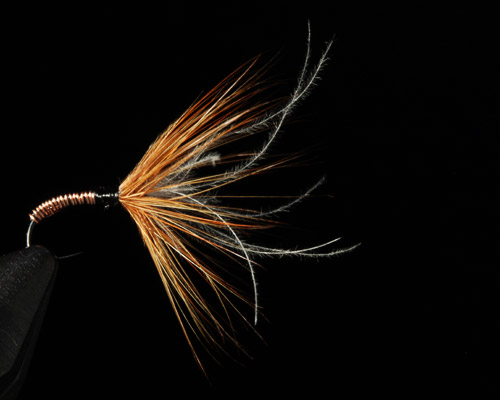 Heineken says, “Hi Daniel ,
I had no time to come up with a little story behind my micro sakasa kebari earlier. Here it is
My objective was to tie a dry fly for quieter pools and streams where picky trout are feeding on small insects off the surface.I wanted to incorporate a little more movement in the hackle so I added some white fibres of culle de canard. The copperwire has to weigh down the body to ensure penetration of the water film, since the fly is very light, and a parachute like landing. Hook: Tiemco 103 bl | Thread : Black 0/8 uni | Rib: Copper wire fine | Hackle: Red cock hackle (Brahman) | Wing: White culle de canard | Simple enough ? 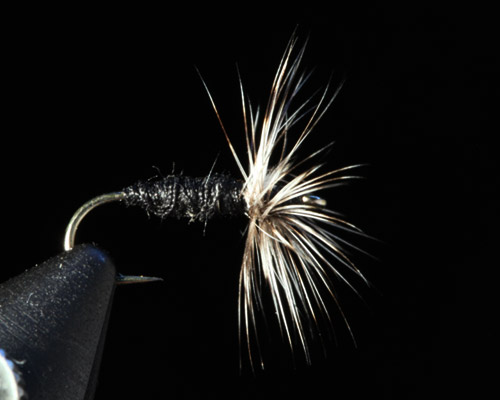 My fly was an “ugly” functional fly, and my take on a “original kebari”. I tied a fly to accomplish one goal: to sink effectively while using the simplest materials, thread and hackle. Actually, there is a bit of a story behind how I learned about this fly. Last September, Dr. Ishigaki came to visit and fish in California. On one of the days we went fishing for golden trout, on a gorgeous mountain stream with many very calm pools. One of the pools had a good number of fish, but they were only going for flies about 2-3ft under. While we could get to them with other flies, it took a while for them to sink. So, after a few minutes he pulled this “secret” weapon. I had seen his fly box many times Yet, I never noticed this “different” fly, which was tied with a lot more thread on the body. We tied this fly on, cast to the pool, and observed it sinking twice as fast. And, we could now catch twice as many fish, still using one pattern.