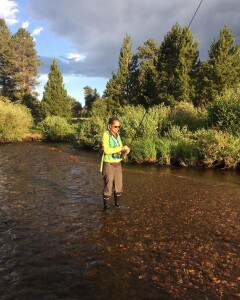 To be honest, I just started fishing a few months ago. I used to know the exact number of days (it’s been about 60) but that started to get weird. In the beginning, I would go to Boulder Creek twice in one day. I’d go to areas where there are less trees to catch my line on. And then I worked my way up to the more dense areas of the creek.

In the early days, I’d only go with my husband and then gradually I started going solo. I watched the knot tying videos and I tried to actually listen to my husband when he showed me, but I tend to get distracted. Then I realized that in the worst case scenario, I could come home to get another fly tied on if I needed to.

Since then, I’ve cast a wider net (see what I did there?) and ventured to a place below Jamestown and also into Clear Creek canyon and along the I-70 (I know. Sounds so romantic). I’ve learned that tenkara fishing Rocky Mountain National Park isn’t like fishing along the Popo Agie in Wyoming. I’ve tested my patience in Wyoming on a tiny part of the Laramie River and will test it again when we go to Montana in a few weeks.

Tenkara fishing reminds me of when I first became a mountain biker. It was a bit intimidating going into the bike store back in those days. The other day I walked into a fly fishing shop in Crested Butte and asked about the local fishing. The guy behind the counter said a lot of things (caddis this, dry fly that) and I realized that there’s a place for me in the fishing store just like there was in the bike store in 1999.

My actual favorite spot to fish? I don’t really have one yet. Although my kids are no longer in danger of choking on a penny or a train car, I still have a full life with my family. I’ll take whatever stream of water I can get. Right now, I know that I like creeks and streams. I love boulders and features. I get my line caught every once in a while and then I (or my husband) get it uncaught. 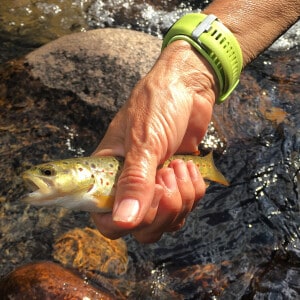 I still haven’t taken the perfect fish holding photo. My husband kindly informed me that I need to “hold it the other way.” I like sharing my photos because most of my friends haven’t heard of tenkara and using tenkara doesn’t discriminate between ‘male’ and ‘female’ or ‘short’ or ‘tall’. I can’t share a bike with my much taller husband, but I sure can borrow his Iwana or Sato.

I also get a chuckle about the simplicity of fishing with tenkara. I saw a few guys gearing up the other day and by the time I’d fished two holes and caught one fish, they were still getting all their stuff together. To be fair, they might not have been in a rush (wink wink).

Right now, I’m using the Iwana. It seems to be a great fit for everything from Boulder Creek to Clear Creek, and to some rivers in Wyoming and streams of Rocky Mountain National Park. I’m a mountain biker, trail runner, hiker and new bikepacker and am excited to integrate these experiences with tenkara.

Tenkara fishing for me is just one more way to be quiet. To not think about what’s for dinner (I have three kids) or how we’ll solve the world’s problems. When I extend the rod and drop the line, there is only that. There is only the water and my tenkara rod and the occasional family who is sitting in the water on a hot summer day.

« Tenkara Lake Fishing in the Indian Peaks Wilderness Tenkara Rods for Beginners and more! Browse tenkara gear based on your needs »