The current issue of Fly Tyer magazine (Winter 2011) has an article marking a milestone for tenkara in the USA. Morgan Lyle, the author, has been following the tenkara movement in the US from day one, and has seen its progression from the day Dr. Ishigaki gave a presentation and demonstration in the Catskills, to the first Tenkara Summit to be held in the US, where over 120 people attended. 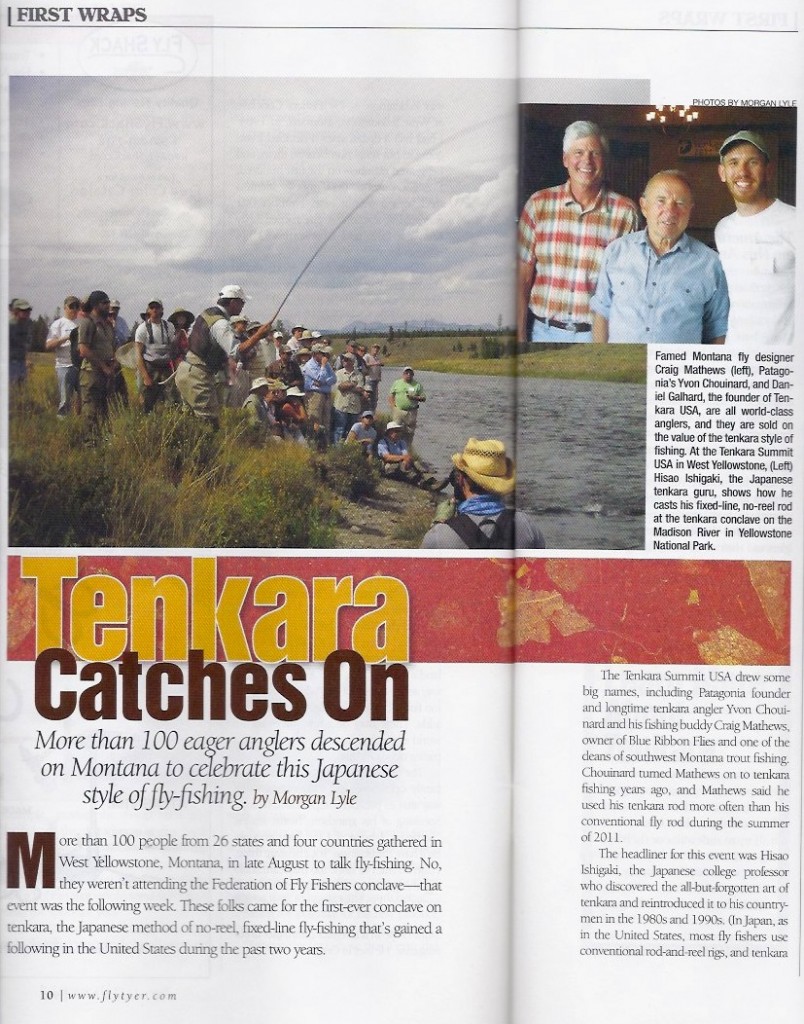 In Tenkara Catches On, Lyle writes about how “American tenkara fans have embraced the method’s no-frills utility and the great presentations made possible by the 11 to 15-foot long rods and feather-light lines.” The Summit counted on the special presence of Blue Ribbon Flies’ Craig Mathews, who helped put the event together, and his friend Yvon Chouinard, founder of Patagonia, describing how, “Chouinard turned Mathews on to tenkara fishing years ago” and how Craig has “used his tenkara rod more foten than his conventional fly rod during the summer of 2011.”

This being a fly-tying magazine he mentions how “anglers have fallen in love with what is widely thought of as the tenkara fly: a simple soft-hackle pattern tied with feather fibers leaning forward. Known as sakasa kebari, it has inspired a wave of creativity as Americans dream up their own patterns and adapt western mainstays to the sakasa style.”

The article mentions the creativity brought about by Ashley Valentine, who created the “Punk Rock Sakasa Kebari”, the Utah Killer Bug by the Tenkara Guides of Utah and based on Chris Stewart’s Killer Kebari, as well as Anthony Naples’, Chris Kullow’s and Dr. Ishigaki’s flies.

Definitely get your copy of the magazine, and if I may, you may want to subscribe to it, as I can see a lot more articles on tenkara flies appearing in its pages.

One Response to Tenkara Catches On