A quick google search for “how many fish species are there?” wil reveal it’s either 230,000 or 30,000…depending on whether you click on search result #1 or #2. That’s how far I wanted to do the research for this post. You get the gist, there are lots of species out there. While tenkara was born in the mountain streams of Japan, and thus the fish targeted were trout or char, many species of fish have been caught with tenkara around the world.

I just had my second experience catching fish other than trout and char this last week when I caught a few “Fall fish” out in Virginia. They were super feisty and a lot of fun. But, I must confess the last Fall fish of the trip upset me a bit. About 15 minutes before I was supposed to leave the stream to go back home I spotted a very good size trout by the roots of a large sycamore tree. I believe it would have been between 16 and 18 inches. I cast my fly upstream from it in order to allow the fly to sink toward the fish. I could see where the fly was and it was getting pretty close to the trout, it may have even been spotted by it. But, before I knew it, the largest fall fish of the trip (about 7 inches) took my fly and inspired this post.

1) Here is Chris Hunt’s infamous pike caught on a tenkara rod. You can read more on his post “Tenkara and the Water Wolf” 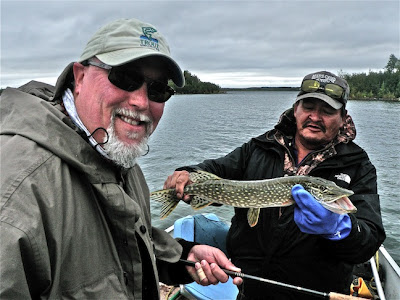 2) Carlos Blatt in Brazil showed us a beautiful tarpon he caught on tenkara. And, Kirk Deeter of Field and Stream (now editor of Trout magazine)talks about his experience on the Field and Stream blog – apparently “Tarpon may be the ideal tenkara fish”

6) One more (or maybe dozens more) by Stan Wright: the peacock bass. Stan is in Hawaii and makes these his staple fish: 7) Bonefish! Yes, real bonefish!!! Those guys known for spooling reels in a second. Although, gladly for the rod, it is a small one:

8) There have been plenty of Grayling caught on tenkara, here’s one Chris Schatte recently shared with us on Facebook

9) Here is the infamous Fall fish I caught last weekend

10) What else have you seen out there? This list is not extensive, and I picked some of the more exotic species, but would love to see your panfish, bass and any other fish. We’d love to see what other species you or a friend has landed with tenkara.

4 Responses to Species caught on tenkara