Scott Hunter of Vedavoo on Tenkara

Scott Hunter created his company, Vedavoo, at around the same time we were starting Tenkara USA. He learned to sew and soon realized there was good demand from tenkara anglers for packs that would fit their needs, and his designs fit. I have been fortunate to get to know Scott through the Fly Fishing Show tour, which we both attend in the winter months. Scott just released the first issue of their ambassador publication, Torch. I was delighted to see his piece on tenkara in it, which he kindly let us republish below. Check out their publication (This is an exclusive publication intended only for their “Torchbearers”, but Scott let us share it with the tenkara community. Little secret: some sweet discount codes in there).

By Scott Hunter, founder/CEO of Vedavoo
I’ll be the first to admit it.  I was that guy.  I thought tenkara was a fad… and never saw myself without a reel mounted firmly to the butt of my rod. 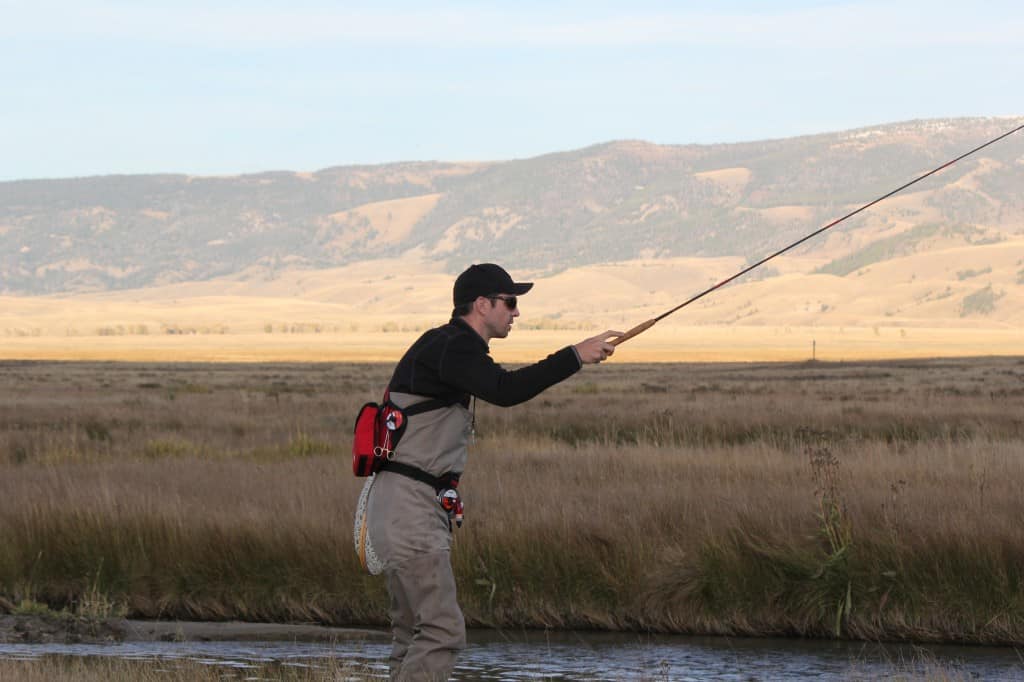 A couple year’s back, a customer sent me a “tip” for a job well done – a Tenkara USA Iwana.  At the time, I was less than stoked… Honored, but I didn’t see how I’d ever put it to a worthy use.  Then my son had one of those miserable “dammit!” days on the water, and swore he’d never touch a fly rod again.  I was crushed – but in my observations, I saw that his biggest issues had to do with the management of the line while casting.

I took a gamble – literally – with my then 8 year old… offering him the keys to my car if he didn’t catch a fish the next time out.  I strung up the Iwana, and set him to work.  Granted, I took him to the “Sure-Thing” hole… and “Sure-Thing” – he had his first fish on within a few minutes.  After almost an hour of dismantling bluegill, bass, perch, etc. on it… and heavily outfishing his dad, I saw the merit.  It was all about 2 key things – Fly Selection, and Presentation.  No more line headaches. and a great foundation for a kid getting started.

But I was jealous of his fun.

I played around with the rod myself, and found that it was unbelievably easy to pick up and fish with.  I loved the compact nature, and on more than one occasion found myself pulling over to pull my Iwana out of the glovebox for a quick fish before home.

Last Fall, however, I got a shot of pure awesome, after hooking 5, and landing 1 (light tippet) Landlocked Atlantic Salmon on my rod.  I had thought it the ideal match for little guys – as is the common conception – but in my effort to find the breaking point, I only found myself addicted to the thrill of the fight – and the new challenge that came with trying to LAND the fish after you get them hooked.  That fish was as Aerial as a Tarpon – and a solid (heavy) 23” fish that rocked that rod at every turn.  But it held like a champ.

We all need that “confidence” fish to really trust our gear – and if my experience is of any value, there are 23 big reasons why you should be confident in one too!

This year, I’ve used my rods (I bought a second – the SATO) a ton – on everything from small streams in New England and Colorado, to the hard currents and tight runs of the North Platte back home in Wyoming.  In all cases, I’ve been thrilled.  Not only does it handle large fish, but it actually has increased my take in tight quarters and in true pocket water.

Dry flies have never been more fun to fish – and emergent midge patterns are so much easier to manage.

I’ve now hooked and landed big Bows, Browns, Brookies, and a few Atlantics.  Though I’ll never give up my trad rods – and though I still fish my 3, 5, 7, and switch rods for the marjority of my fishing, I can honestly say that my tenkara rods have become a staple in my quiver.

One Response to Scott Hunter of Vedavoo on Tenkara