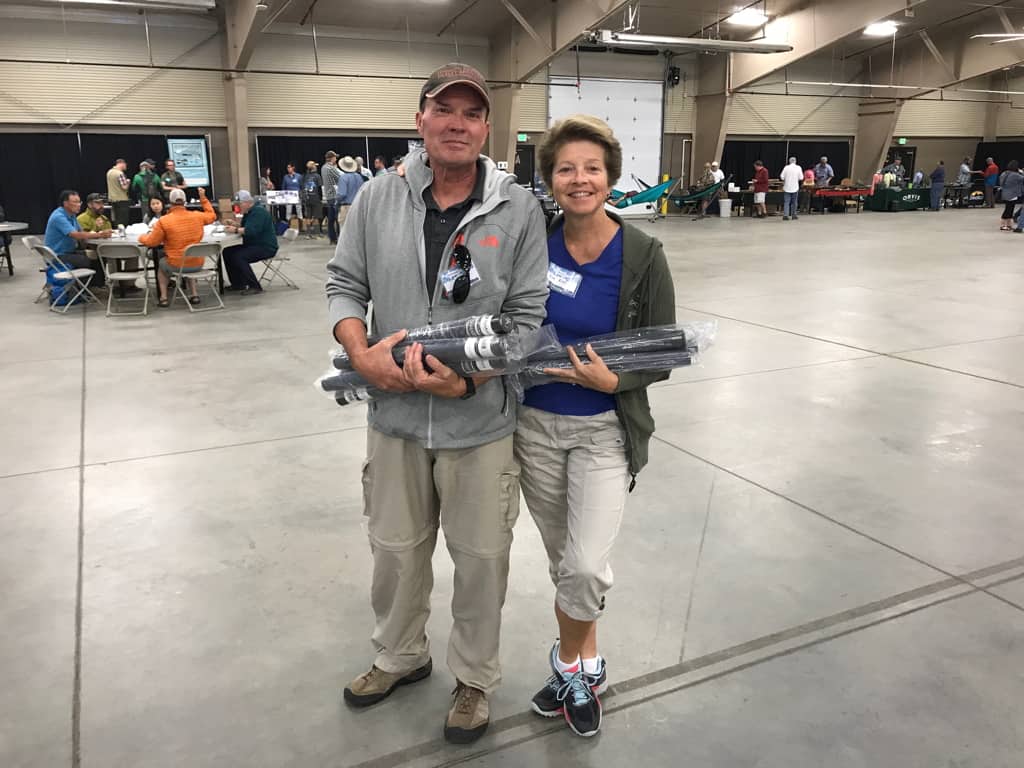 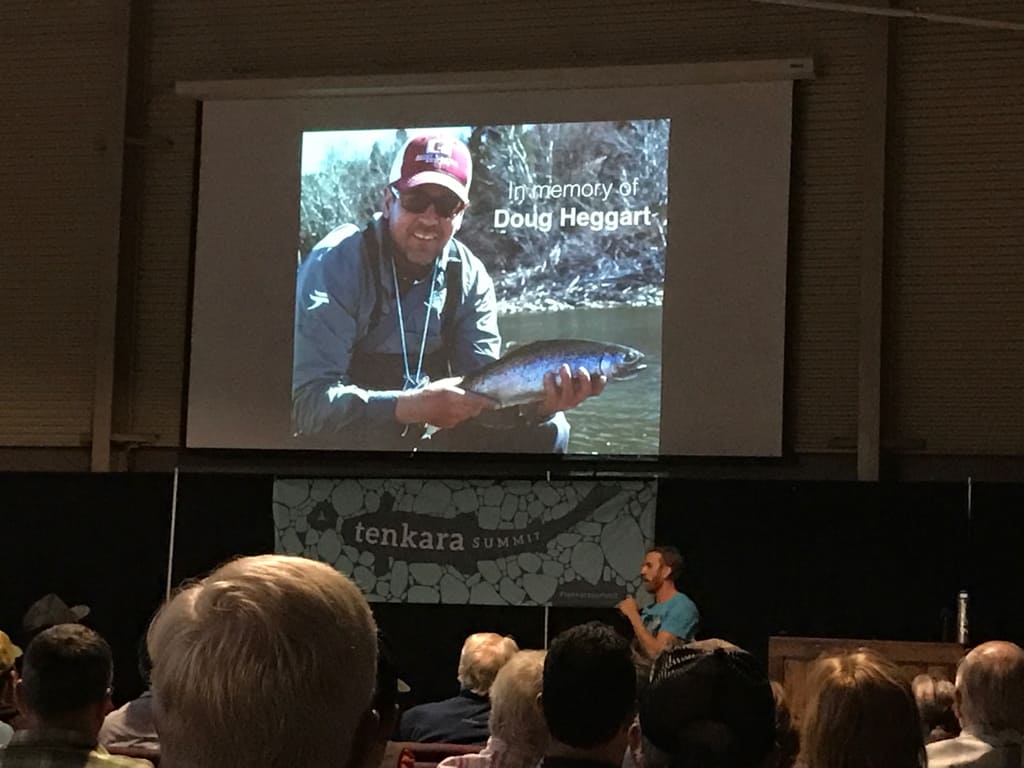 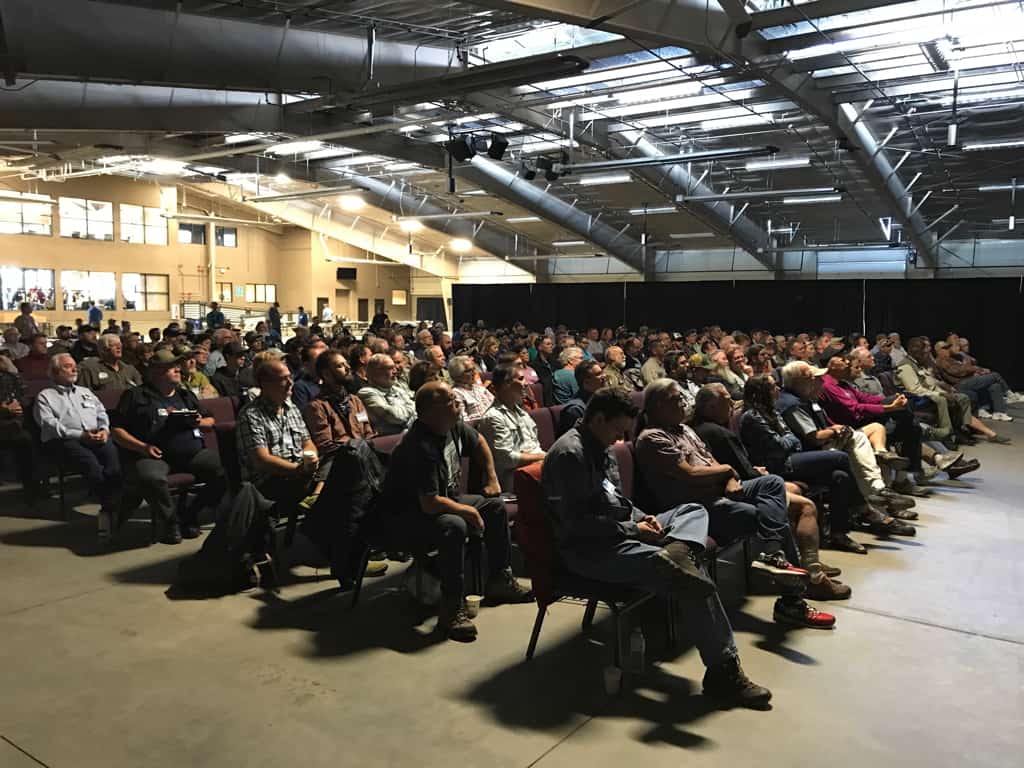 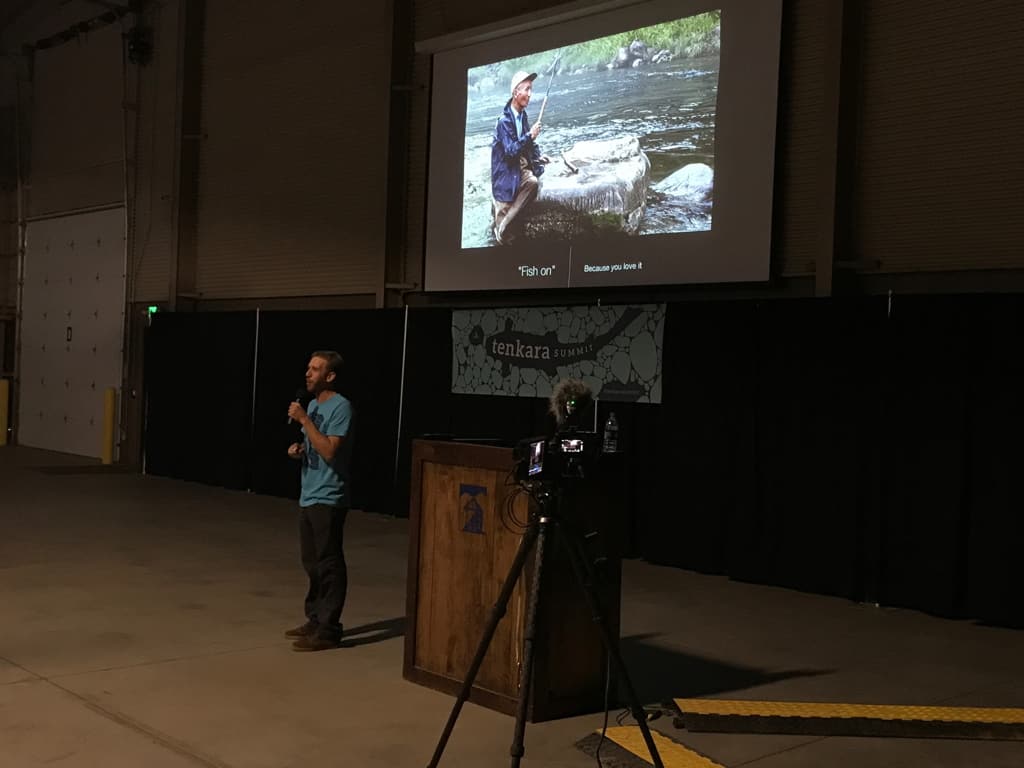 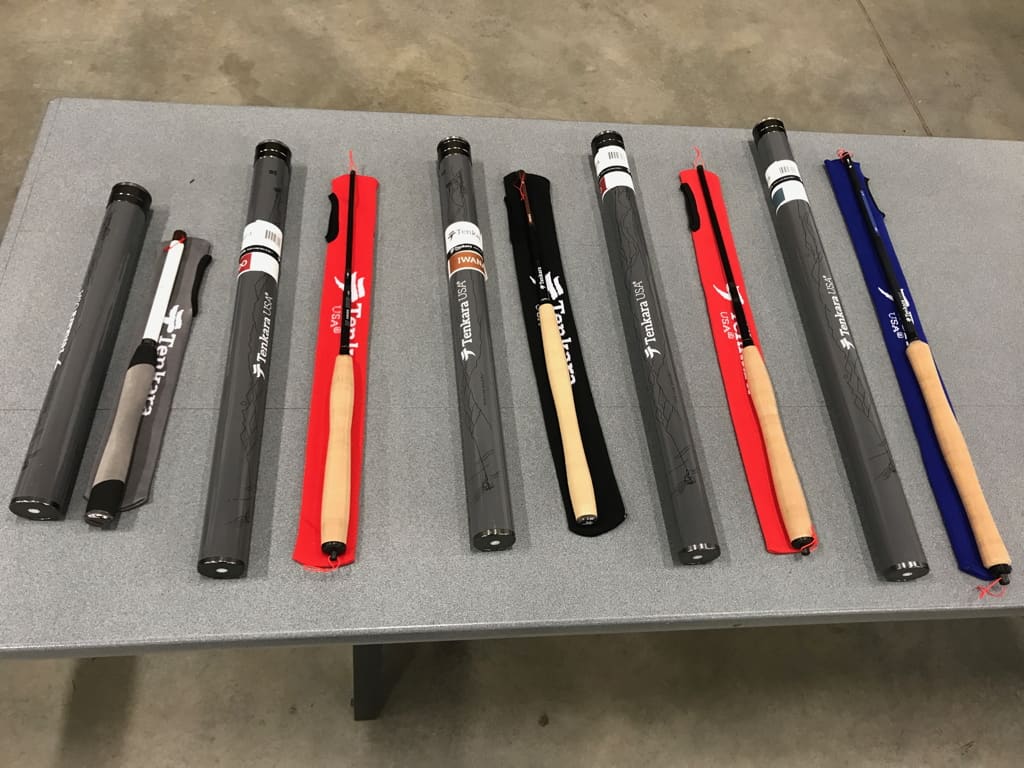 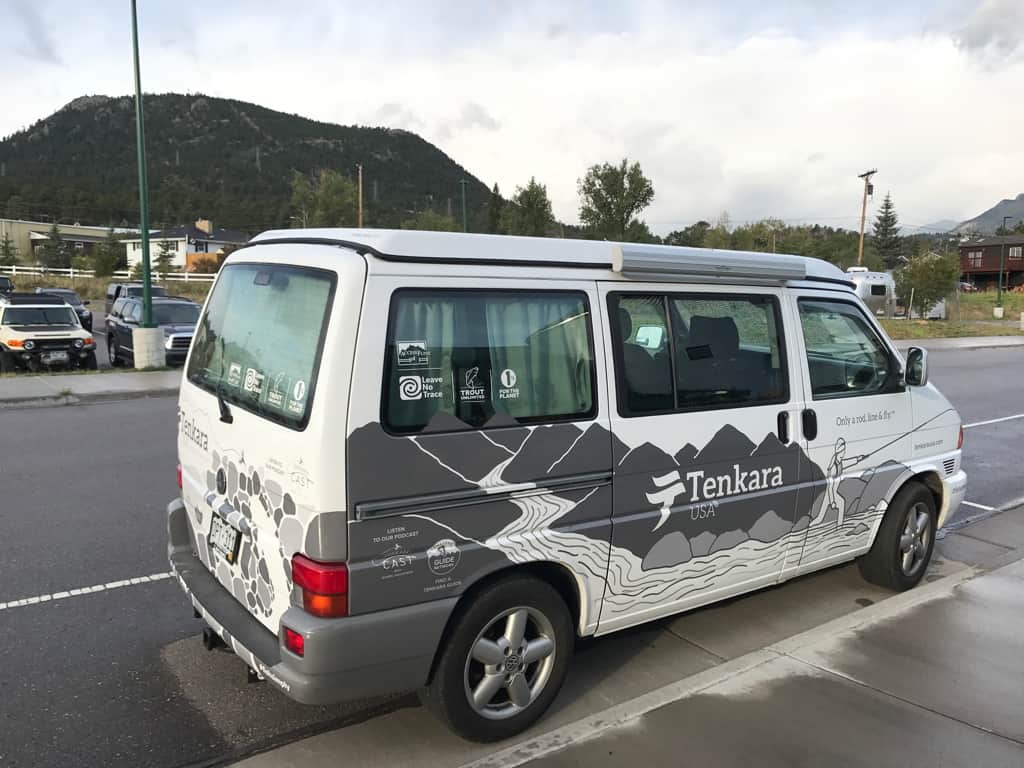 I had been reading about Daniel and Margaret’s van tour. They had kitted out a Volkswagen van, driving it to the best place to watch the eclipse and of course, to go fishing. Conducting business on the road in a Volkswagen no less, reminds me of my days when I was his age in my own VW 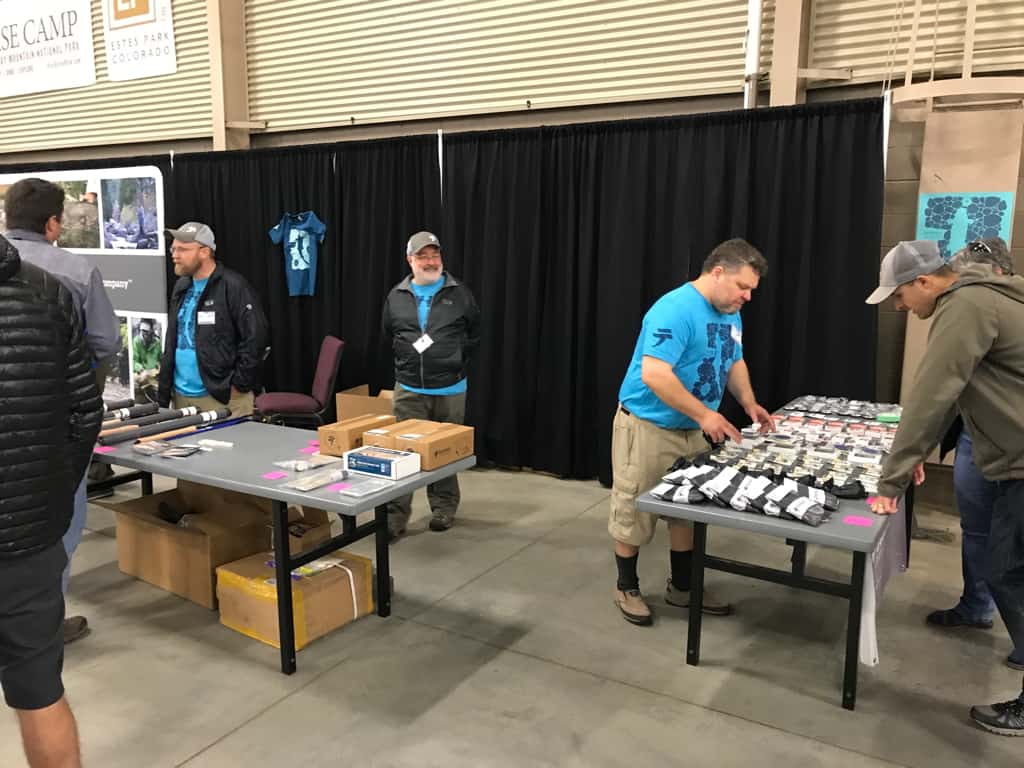 John, TJ and Mike, welcoming me to the team, it was a very warm reception. Seeing these guys in action brought back all the memories of following the company through the different trade shows except now, they were here. My dream was real, unfolding in front of me. 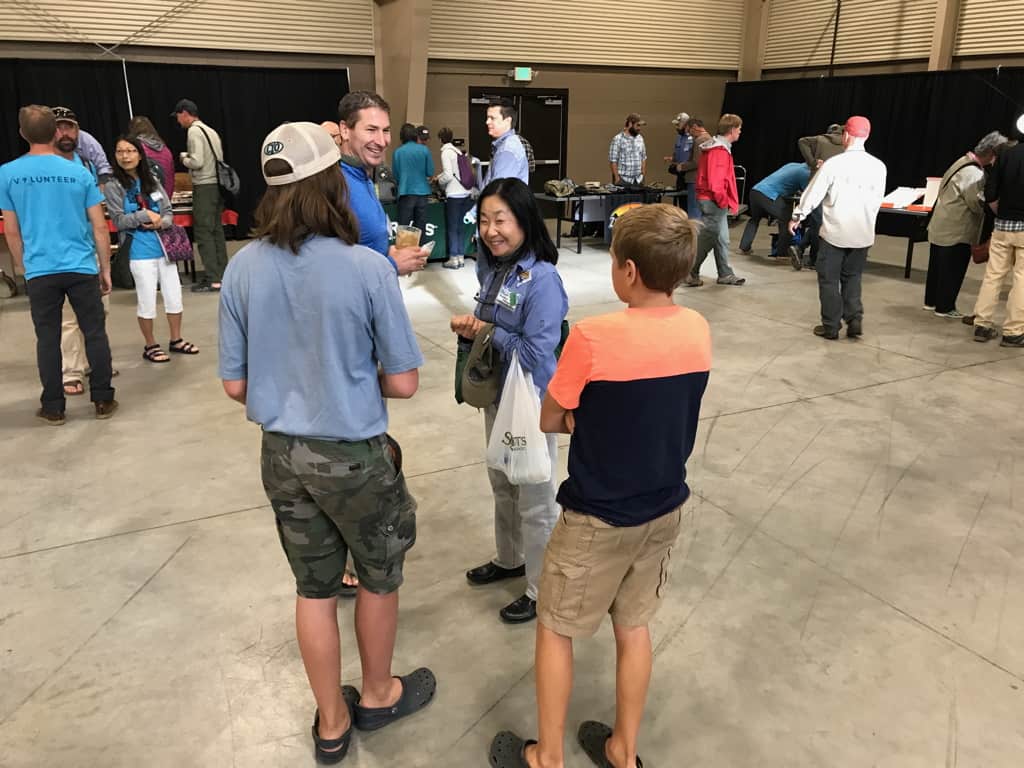 There were people mixing with authors, famous fishermen and people that are into tenkara since day one in the US. As I walked around, I could recognize faces that I had seen in social media and from two years ago from the last summit. 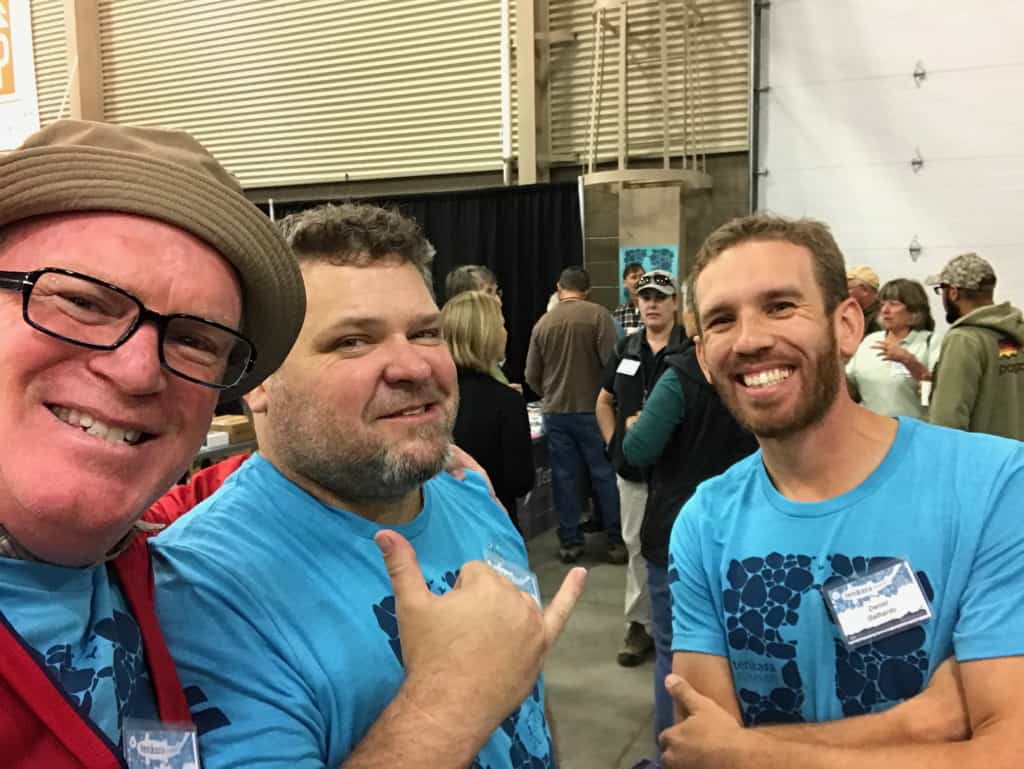 I had to get pictures of myself to show my friends at home that this was real. I’ve been writing from afar for so many years, creating content, bringing people together all across the globe but it was now my time to close the gap and make the relationships real. 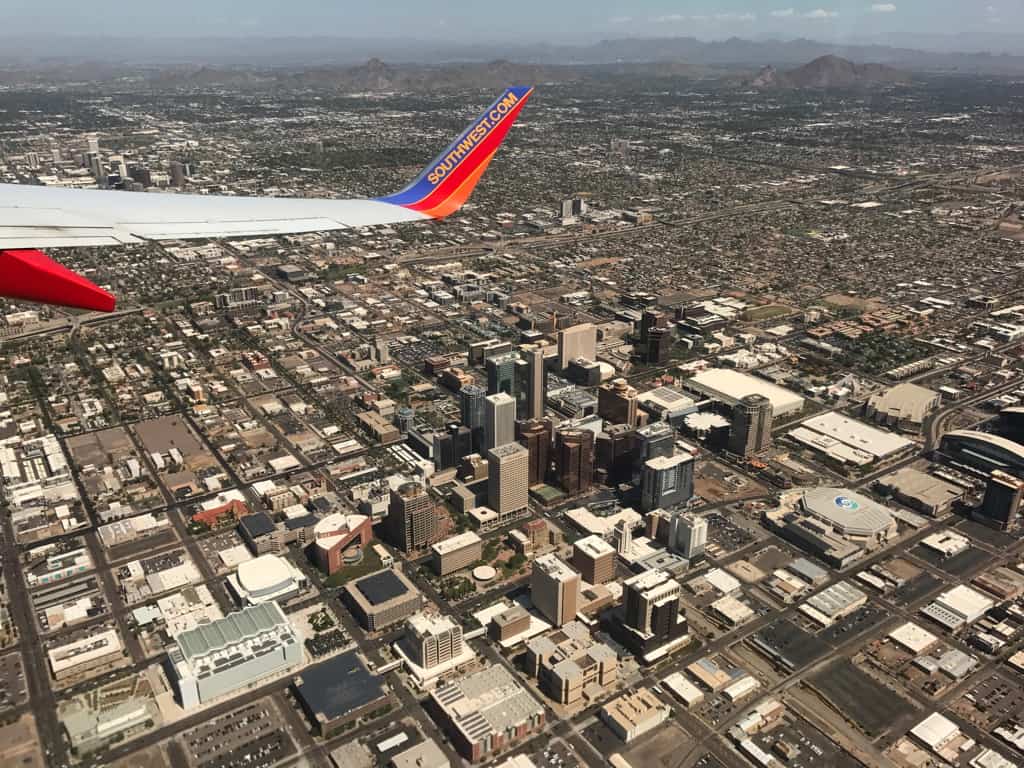 The flight to the Summit was short and filled with excitement for my fishing partner Jim. I had taught him tenkara some time ago and we had been making a lot of trips to Oak Creek and the Mogollon Rim. But now were were headed to Colorado to meet the people that we got our equipment from and the experts we had been reading about. 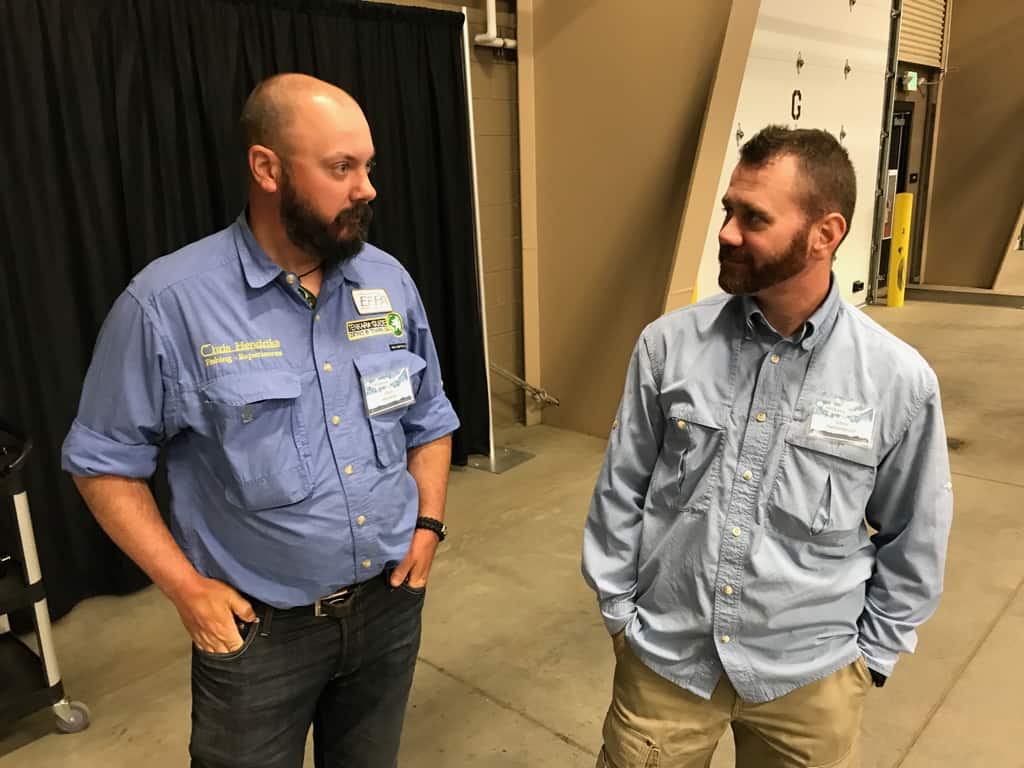 Chris Hendriks had flown in from Europe, a Tenkara USA guide/rep there. Chris Fahrenbruch, I had already meet from the last summit, like I said, it was good to close the gap. It was great to chat with these guys. 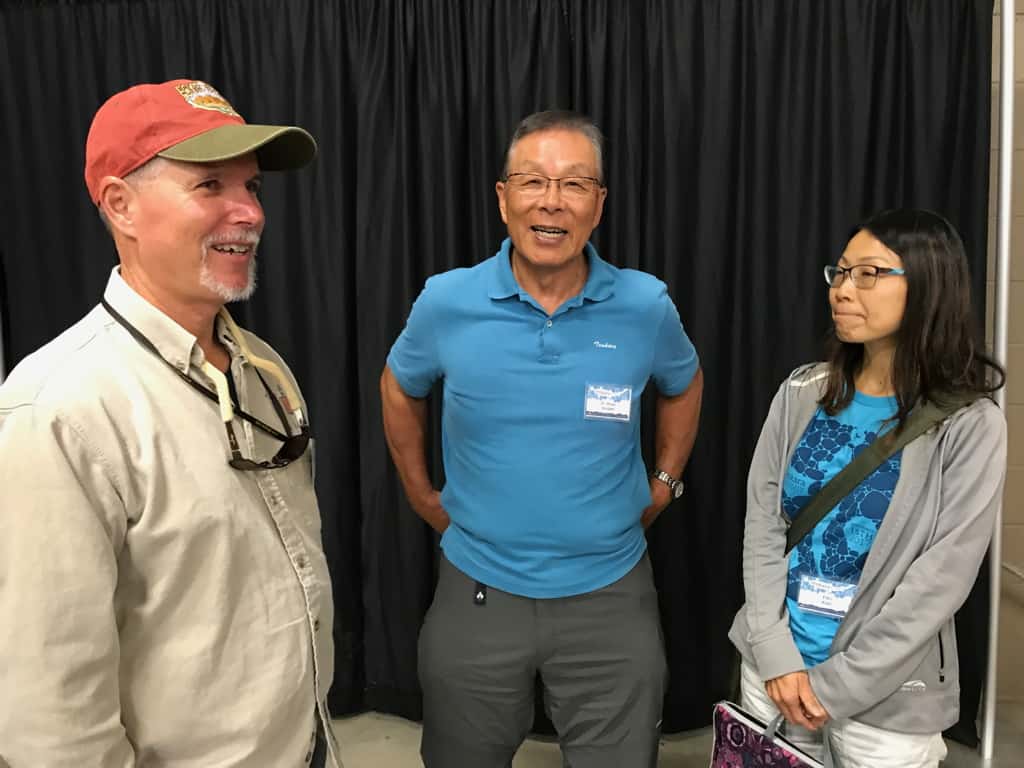 My fishing buddy John Sachen had introduced me to Dr. Ishigaki in Japanese. I could see sensei light up as he was able to express himself freely and quickly as John knew Japanese and tenkara. Dr. Ishigaki was one of the last tenkara experts from Japan that I had interviewed that I wanted to close the gap with. He was genuinely excited to meet me. 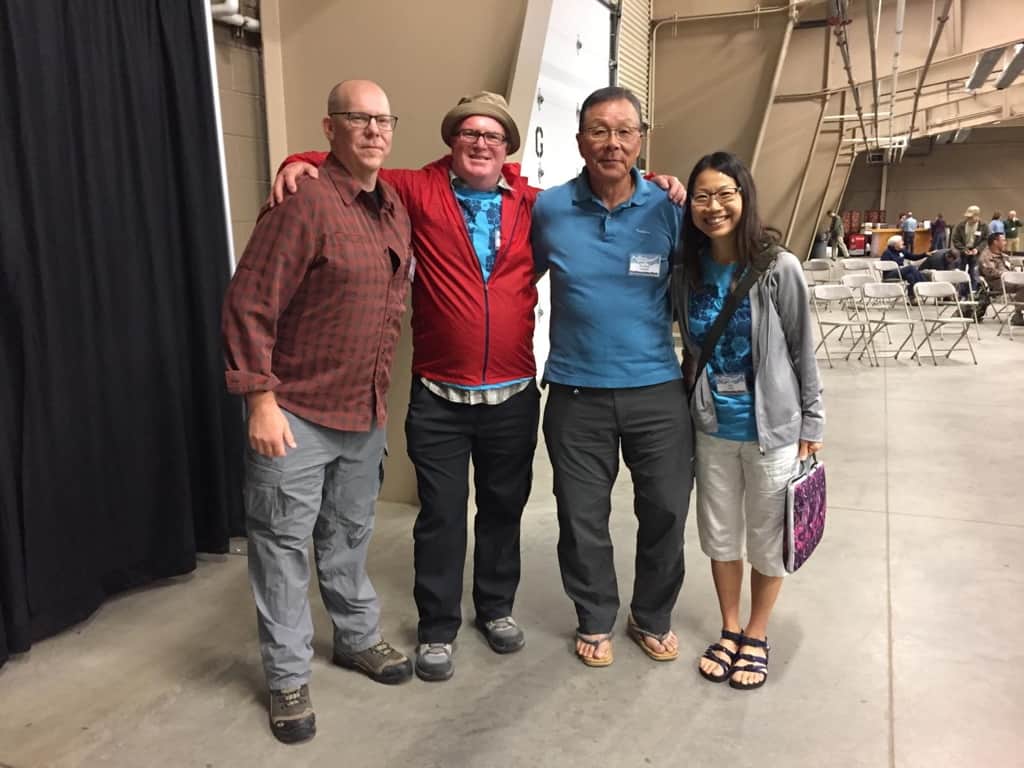 John suggested we get a group shot. Smiles all around, it was great to meet Dr. Ishigaki, we had been exchanging e-mails for many years and I missed him the two times that I had been to Japan fishing. 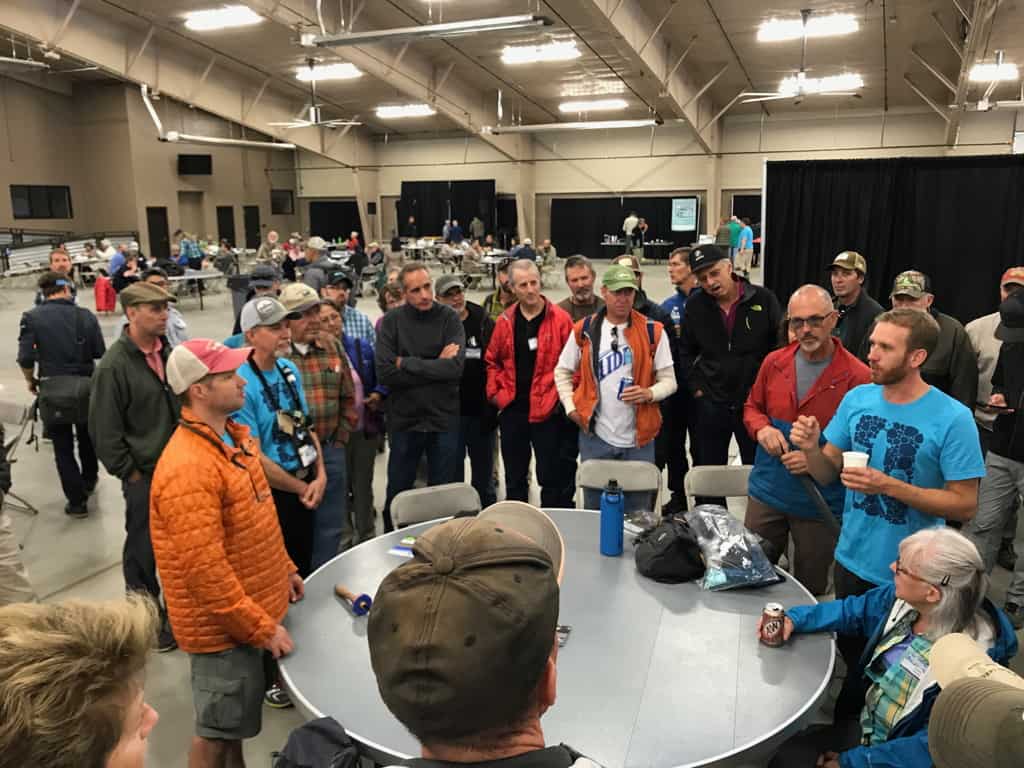 Back to the Summit activities, there was something for everyone. Here is the rigging table. There were a lot of people brand new to tenkara that wanted to see the knots and rigging done by experts. 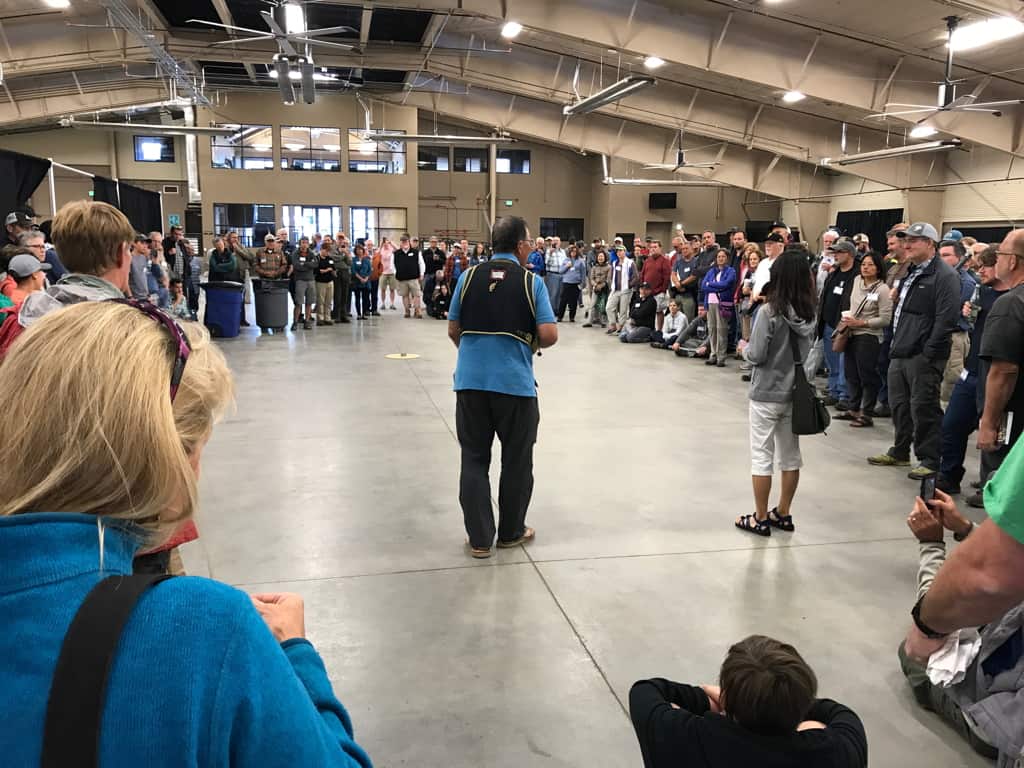 And then it was my turn. I set up the casting targets for Dr. Ishigaki. He effortlessly taught a class on casting to a huge crowd gathered around. One of the audience offered to be the fish, someone had asked sensei how he lands a fish. The woman grabbed the end of the line and sensei fought her in. Probably one of my favorite laughs of the summit, I really enjoyed it. Now imagine having to give a class on how to target cast after the world famous tenkara teacher gave us such a great show. It was intimidating but I managed to get my point across. I saw that Adam, Rob and JP were in the crowd and I called them out. I knew they were fresh off the stream and they helped demonstrate accurate casting. Rob grabbed my rod and put the fly in the tuna can a couple of times in a row, it was a good call on my part. 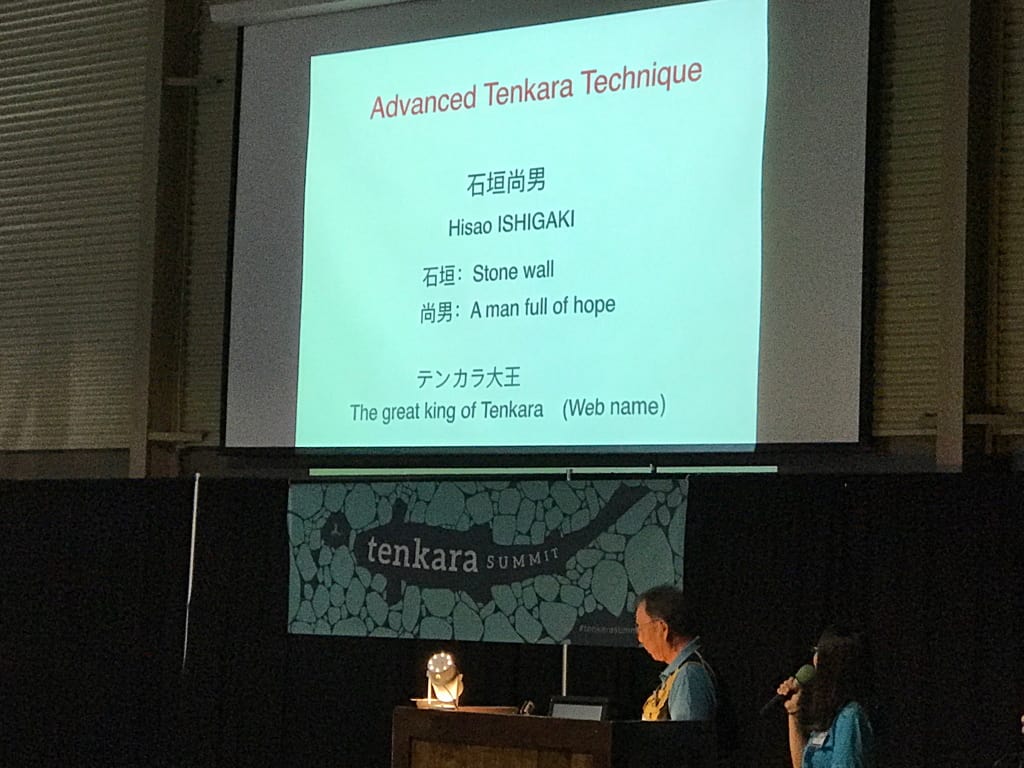 Dr. Ishigaki took the stage and gave his presentation, “Advanced Tenkara Technique” which was excellent and I was learning from the best, we were all learning, all skill levels and we were getting into the sweet spot of the summit. 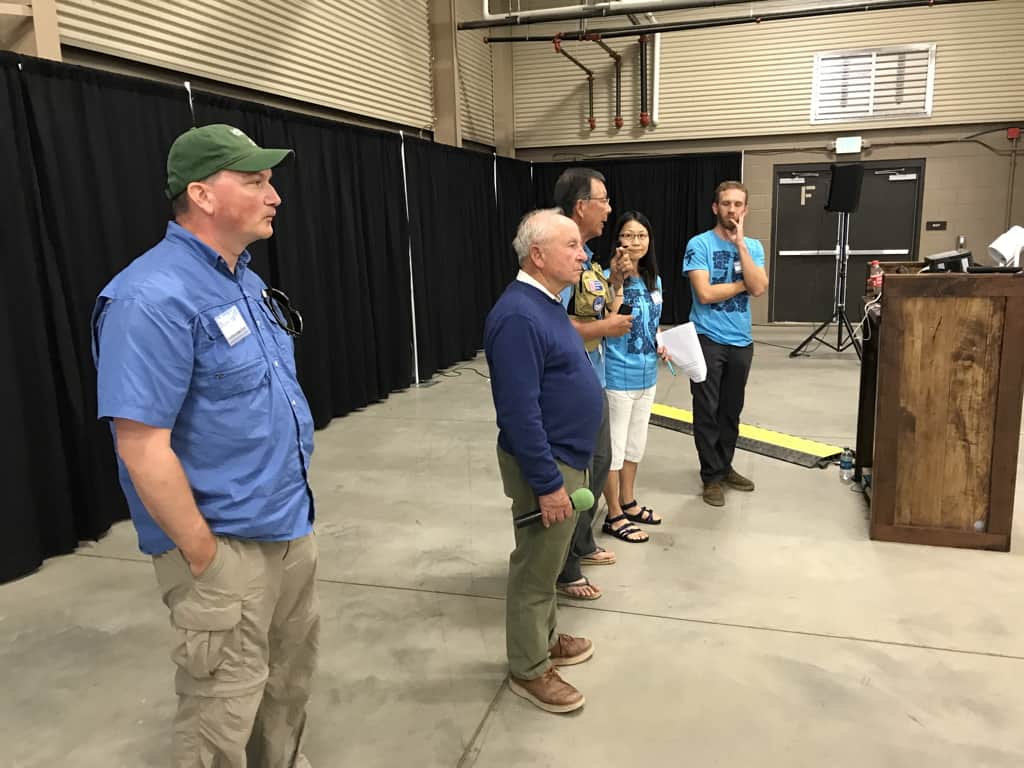 I moderated the panel of speakers, Matt Sment, Yvon Chouinard, Dr. Ishigaki and Daniel. Taking the microphone to the people in the audience, I started to realize just how important the summit is to my own tenkara. I have a few friends here in Phoenix that I fish different areas of the state with. But here in front of me where a panel of experts taking questions from a large audience. It was amazing to say the least. 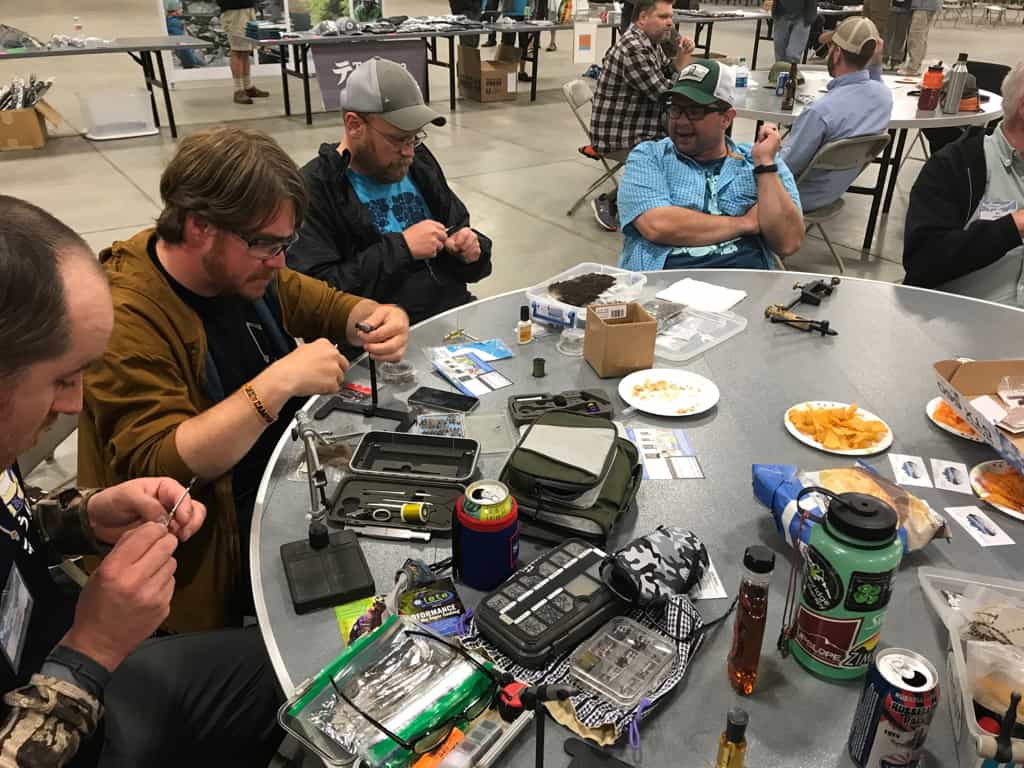 That evening we came back to the venue to do some fly tying. I needed a few kebari for the fishing that I was going to be doing the next day. I had been fishing for the last few weeks and my box was depleted of my favorite kebari. It was fun to tye with friends from afar. I tied up a few of my own “wrong fly” and Ishigaki kebari. And before I knew it, the event was over. 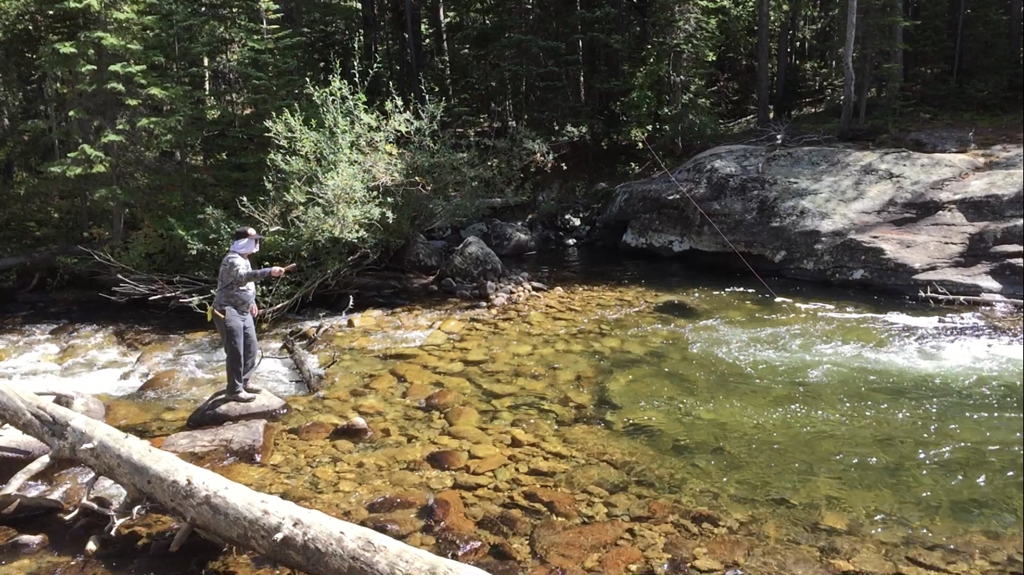 Late into the evening, we shared our experiences of the Summit around the table. We shared a bottle of spirits and enjoyed each other’s company. Around one a.m. I turned in. John and Jim picked me up the next morning from the Tenkara USA house. I said my good byes and quickly the time was slipping behind us. We fished a couple streams and then turned the car back to Estes Park where my friends hotel was. 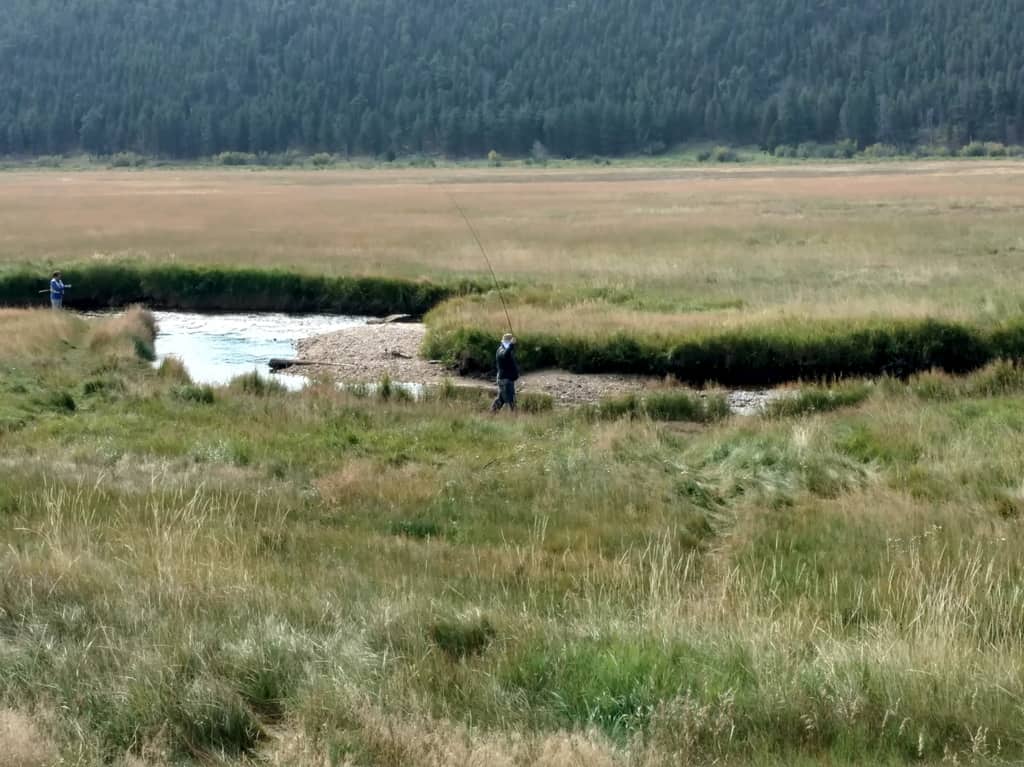 I’m back home now, reflecting on the summit and meetings with my friends to come. As time moves along, I’m sure that we will meet again in Colorado or any of the places where tenkara anglers gather. For sure, tenkara is growing, very much alive, so many people excited to meet each other and learn.

6 Responses to Reflections on the 2017 Tenkara USA Summit