What? Daniel was seen using a non-tenkara fly today? A parachute adams? 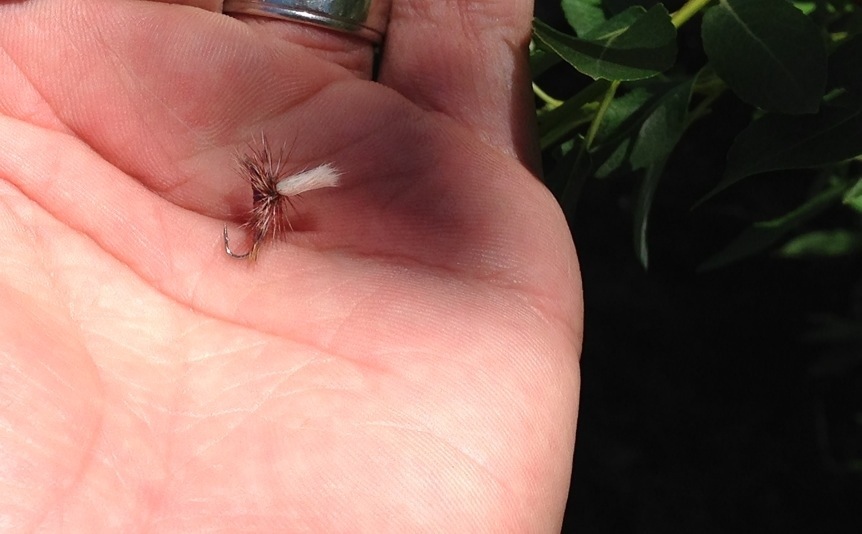 Yes, I was seen using a parachute adams fly on my tenkara rod today…actually, I believe nobody actually saw me using it. Here’s what happened.
I went fishing with my friends Dan and Graham today. We heard there were possibly some grayling in the area and decided to find them. Upon arrival at our destination I setup my tenkara rod with a long tenkara line, and kept the tenkara fly from the last trip tied on. Almost immediately I had a beautiful brook trout on. Within an hour I had probably caught 20 brook trout on that one fly, until I lost the fly to a tree. 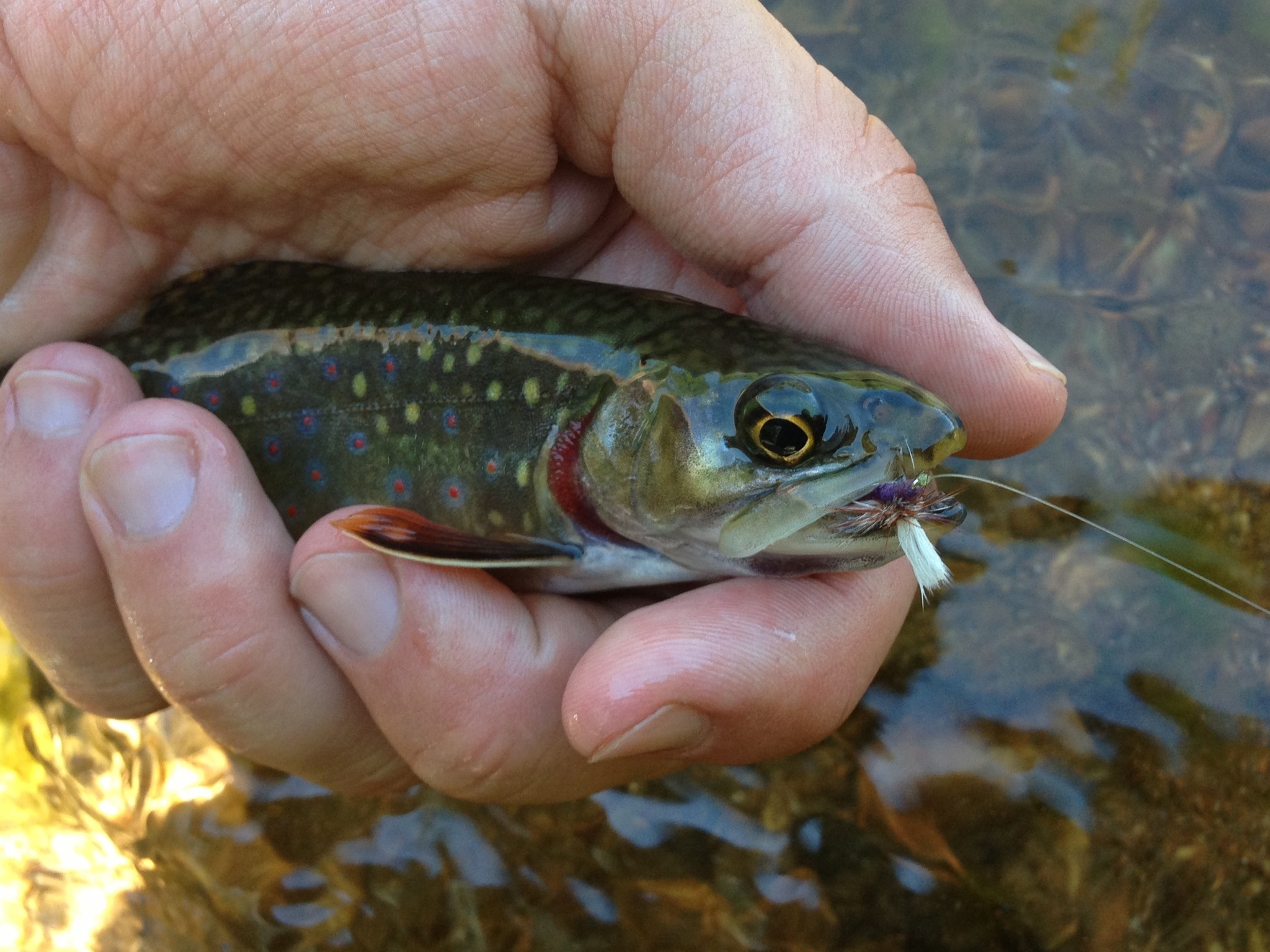 Reduce: Over the last three years I have greatly reduced the number of fly patterns I feel I need. In fact, it’s now essentially one pattern with 4 variations (the four tenkara flies that we offer on our site, well, one is out of stock). And, since tenkara has helped me stay away from trees more often than I used to, I feel that I have also reduced the number of flies I lose while fishing. And, of course, I reduced the amount of time changing flies, the amount of tippet bits I lose when changing them, and my consumption of materials used in tying flies.

But of course, I still lose the occasional fly. Today’s stream was relatively tight with lots of trees behind me and the inevitable happened when I got caught on a branch and the fly wouldn’t come free. I collapsed the rod, plugged it with my thumb and pulled the line to break the fly off. Then, off the corner of my eye I spotted a section of tippet material on a branch. (As I always do to prevent animals from getting caught) I decided to retrieve the tippet. And, then I noticed there there was a fly at the end of it. Often the flies I find hanging on trees are badly rusted, but this one wasn’t too bad. And, there were 3ft of slightly faded tippet along with it. Maybe all the flies hanging from the trees could allow me to reduce how many flies I take with me even more. 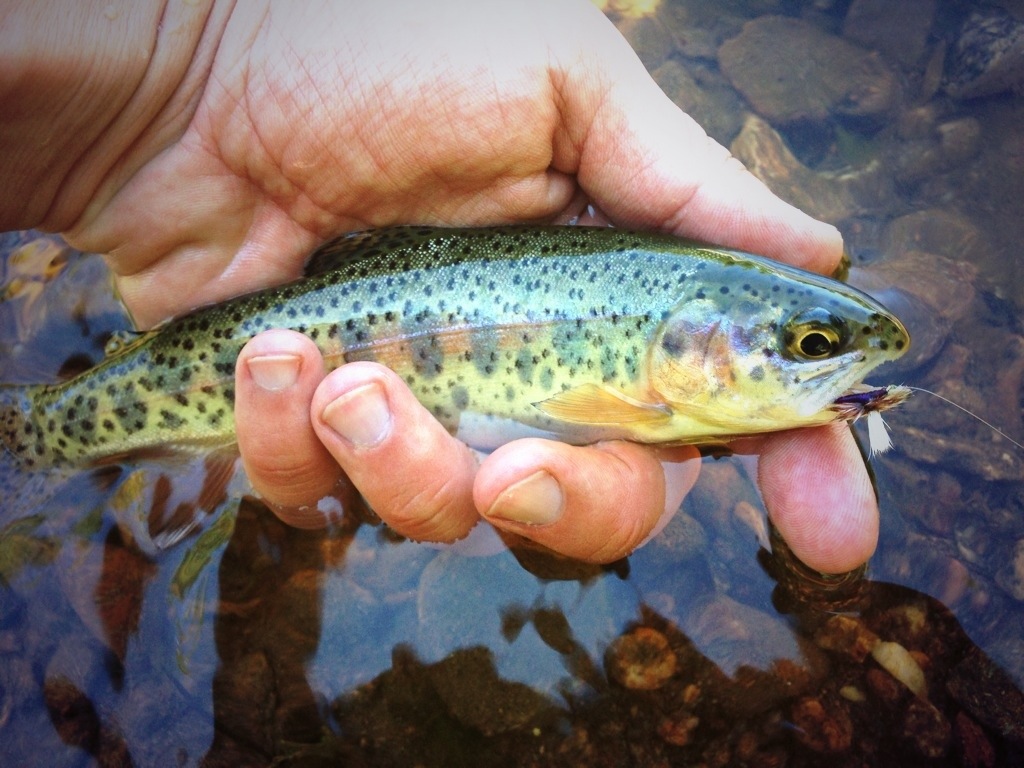 Reuse: Instinctively I went to put the tippet and fly on my pocket, but then I had this thought. Why not just use it? I mean, I just lost my fly and would have to replace it anyway. I’m not a “tenkara-fly-purist” (as some may think) – my philosophy is simply that the fly doesn’t really matter that much and just about any fly will work. While I typically I opt for the simple tenkara flies, which I find to be more versatile and quickest to tie, the time-proven parachute adams was certainly not below me. The tippet wasn’t too bad, a bit thinner than I like, and a bit faded, but there were no knots on it and it would save me from getting more tippet out.

I tied my “one knot” on the tippet and connected it to my tenkara level line. That’s when the title of this post came to mind: Reduce, Reuse and Recycle.

This was the first time in 3 years that I used a parachute adams. The fly was so easy to spot, with the bright white post, I almost felt that I was cheating a bit. But, it is not about rules, it’s about enjoying the fishing, learning and when possible conserving. On my second cast I connected with a rainbow trout, only rainbow of the day. And, then a brook trout and another one, and another one, and then a take that was stronger and perhaps faster than any I had experienced until then.
I had all but forgotten about the grayling by then. I watched the parachute adams drifting downstream into the calm pocket below me. The natural drift of the fly filled me with anticipation. This pocket of water was slightly calmer and bigger than most I had fished today; it had to hold a good fish.
The take, as I mentioned, was fast and strong, and the strong fight greatly reminded me of the grayling I caught in Alaska a few weeks ago. As I got the fish closer to the surface, it shone brighter than any of the brookies I had caught, and it was more slender than the rainbow. This had to be a grayling.

After the fight I was thrilled to hold another grayling in my hand and snap a quick photo of it to share with you. This marked a sort of Grand-slam today, which was pretty cool especially since it was a grand-slam on a fly and tippet that I found hanging from a tree. In total I caught 8 fish on that fly and section of tippet. The grayling was released to continue its life-cycle. 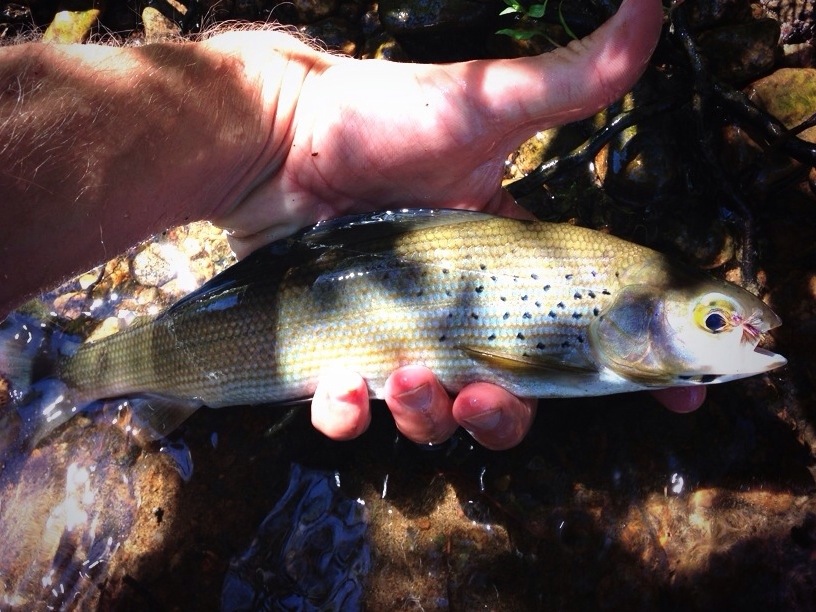 Recycle: I could have stopped at reuse but it wouldn’t sound as catchy, would it? So I’ll just point out that flies don’t have to be the disposable items we often think of. You can read this post on “Recycling fly tying hooks” to see what I’m talking about.

Have you found ways to reduce your fly load? Ever reused a fly found on the trees? Or, spent a bit of time recycling fly tying hooks?

« Going deeper for mushrooms and trout my idea of “from heaven” Tenkara Interactions – “Are you the tenkara guy?” »