Reaching and holding a fish – not like an eagle.

My wife and I were reviewing pictures from a recent fishing trip we took with two friends who are new to fly-fishing. I mentioned how it was funny that I needed to remind both our friends to “show me the fish!” After struggling to hold the fish, they would proceed to hide most of  it with their hand. I personally couldn’t understand why they were doing that. And then my wife remarked that, “most people will try to grab a fish like this…” as she mimicked the motion we use to pick an apple off a table for example, “that’s how we naturally do it”. 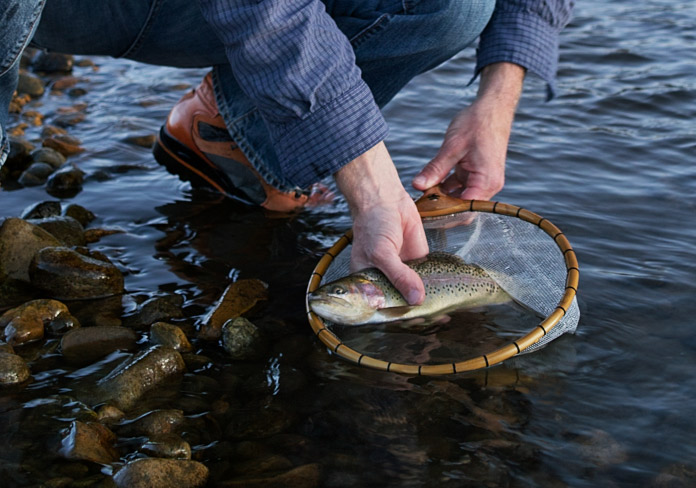 A couple of days ago Jason covered 5 ways people may catch more fish with tenkara, so the timing for a post on technique for handling the fish is appropriate as I hope you will be catching more fish on your next trip.

But this post is not about how to hold a fish for a proper photograph – for a good post of this kind you should check out Chris Hunt’s humorous blog post on eatmorebrooktrout.com. And, with the goal of taking pictures of your catch, please remember to keep the fish in the water for as long as possible, wait until the photographer is ready and his camera focused, and ONLY THEN take the fish out of the water for that photo you will post on our forum.

This post is simply to point out something that may or may not already be obvious to some of you. For me it was intuitive enough that I never noticed the mechanics of reaching and holding a fish. 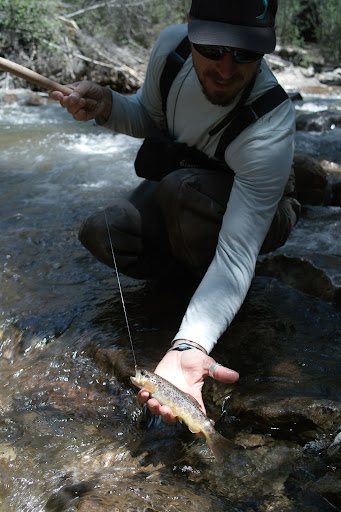 As we reviewed pictures from that trip, I noticed that in addition to not properly showing me their prized catch for a photo, our friends were invariably struggling to take a hold of the fish as it flopped around because of the way they tried to hold it. As they reached for the fish from above, the fish would easily slide off their hands and/or be scared for its life and flop around like crazy. It would take them several seconds to stabilize the fish, not good.

If you can picture it, my friends were reaching for the fish in the same way eagle will catch one – from above – except that the eagle’s claws are much sharper and capable of getting a much stronger hold of their prey. Trout do not like being grabbed, period, but they seem to have developed a stronger reaction to being grabbed from above.

As I gave it some thought, I realized that in recent years holding trout had become much easier. I thought about what made my holding of the fish different from my friends who are new to fishing. I noticed that rather than grabbing the fish from above, I slide my hand down the line and as the hand approaches the fish it will either cradles it from below or from the side. I also pulled the line closer to me, whereas they were keeping the fish at a longer distance from them and trying to grab it.

When cradling the fish in this manner – from the side or from below – it seems to be much calmer, the pictures invariably turnout better and the fish suffers less. In the image below I remember pulling the fish close to me, sliding the net below it, and then sliding my hand into the cold  water  inside the net and approaching the fish from the side, slightly from below. The fish still had lots of energy but seemed to accept my approach. 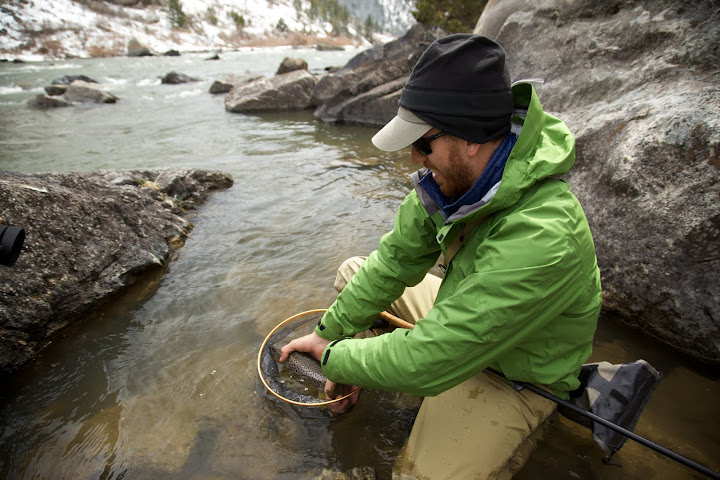 Image by Brian Flemming of LearnTenkara.com

That is not to say fish do not flop like crazy on occasion even when I try cradling them from below – they still do, which is why I have come to favor using a tenkara net to begin with. Further, it seems to me that smaller fish will flop more and are a bit harder to calm down than some larger trout, though there are always exceptions to the rule and every fish will be different. Tenkara nets are very helpful for this as well as you can leave the fish in the water as you proceed to dislodge the hook from him and then let him go by tilting the net toward the stream.

And, as Jason pointed below in the comments, after you reach for the fish and are able to hold it (which is what this post is about), it can be useful to turn it upside down for a moment as they tend to stay still when you do that.

I should point out however, that often there is no need for a picture of the fish and a much better way to handle a fish is to never handle it. If the hook is sticking near the mouth of the fish I much prefer to slide my hand down the tippet, grab the beginning of the barbless hook and dislodge it from the fish’s mouth by turning the hook slightly, without ever touching the fish.

To be honest the realization is so new to me that I have no idea whether I’m doing what I suggest as the better way of handling a fish. The flopping seems to have reduced in recent years, and I believe part of that can be attributed to a simple modification in how I approach and handle the fish. I’ll certainly have to pay attention on my next outing.

If my observations here are incorrect, at least they help explain why it is possible to catch trout by tickling them. The more you know, the less you need right?

2 Responses to Reaching and holding a fish – not like an eagle.