Pesca alla Valsesiana and tenkara are very similar methods of traditional fly fishing, created for sustenance and both born and raised in small mountain villages many centuries ago, one in the “Val Sesia”, a small valley of the Sesia river in northern Italy, and one in Japan. [Pesca means fishing, and the Italian method of fishing can be referred to as “pesca alla valsesiana”, “pesca valsesia” or simply “Valsesiana”

It’s amazing to see how two cultures, so very far from each other, with no single point of contact or communication between them, reached a similar solution and method of fishing to earn a living. In pesca Valsesiana we have a fixed line rod, traditionally made of river canes called “canna di nizza” with a bamboo tip, with no reel and with an braided horsehair line. The Valsesiana has remained stuck to its tradition, which still sees a braided horsehair line and, with very few modern exceptions, a wooden rod.

The braided horsehair line used in pesca alla valsesia becomes heavy when it gets wet, so the rod has to be much stiffer to cast it than many tenkara rods. In fact, in Valsesiana, the rod action goes from a stiff 7:3 to 8:2.  Also the casting technique is different, because in Valsesiana we have many false casts to reach a spot or to dry the line, with an air rotation of the horsehair line similar to a whip in the air.

The flies used in Valsesiana are in fact similar in feather, size and tying method to the tenkara’s kebari.  However, in pesca Valsesiana we use a brace of flies or what Italians call a “trenino”, literally “small train”, made of three flies, with the first one working as a dry, or as a strike indicator like in the dropper technique or just under the surface in the bigger pools. Fly colors are chosen according to the season.

In short, the concept and birth of tenkara and pesca Valsesiana are similar, but both the gear and the technique in fishing are very different, very much. To please your Italian stereotype, I would say that Valsesiana and tenkara are two wonderful “sisters”, but one blonde and the other brunette!
—- 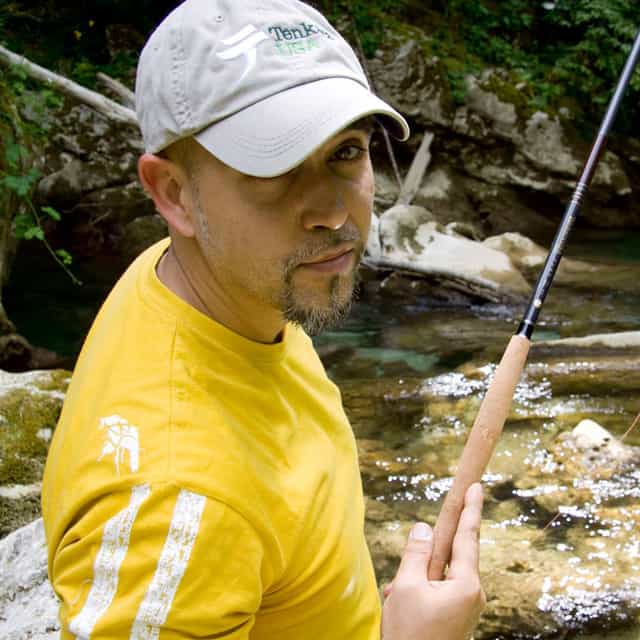