One of the possible origins of tenkara, part 1

There are several theories regarding the origins of tenkara. It may have been imported from China, it may have passed through the lowlands in the hands of samurai and up to the mountains, or it may have originated independently. Personally, I have no reason to believe it didn’t originate independently. The mountain folk in Japan had an abundance of fish in their reach, and plenty of streams around them. The abundant bamboo in some areas made bamboo rods an obvious tool of choice, and what is perhaps one of the most logical steps towards fly-fishing, creating artificial flies that could be used over and over again to catch fish in small running streams was by far much more efficient than using bait (tie one fly and catch several fish v. look for bait, catch bait, change bait, catch one fish…). One of the theories for the origins of tenkara is the “samurai tenkara theory”. It’s the theory most westerners are quickly drawn to because it brings to mind the poetic image of a samurai with a fishing rod as substitute for a weapon. I think it is plausible, and cool, but based on one counterargument, presented here, it may not be the most likely origin. 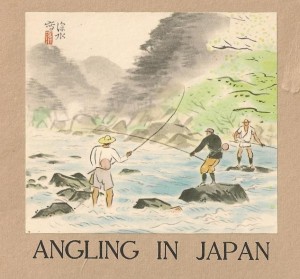 It is known that the samurai, one of the highest classes in Japanese society at times, fished for Ayu and other fish found in the lower flatlands of the country. They even used this method of fishing as a martial arts practice substitute at times of peace and quiet. It is also known that the samurai sometimes used flies; intricate patterns made with several types of feathers and silk wound around bent needles. As the samurai tenkara theory goes, their method of fishing may have found its way to the high mountains of Japan where it was adapted by locals to small, fast running streams and became tenkara.

Before visiting Japan with my wife in 2008, my first time there, I did some extensive research on places I could visit in my quest to learn more about tenkara. I had already been researching fishing in Japan for a while, but this was the opportunity to actually see the places where history happened. Thus I found out about the longest running fly shop in Japan, and likely in the world! And, if the samurai theory was true, this may have been the “birthplace” of tenkara (the documented, and still existing place that is). 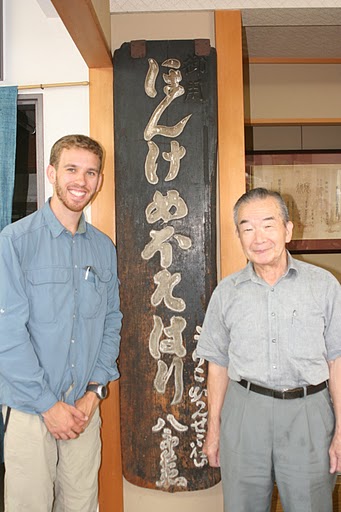 In the city of Kanazawa, near the Sea of Japan,one can find the Meboso fly store (Meboso Hachirobei Company). Even though it was hours from any destinations on our planned itinerary, I just had to pay homage to them.Meboso may be a relatively unknown name outside of Japan. But, get this, the Meboso family has been making sewing needles and the sewing needles’ “natural companions”: hooks and flies, for 20 generations, or over 430 years! They were founded as a needle shop in 1575!!! And, they still operate! And, they operate from the same place!!! Nowadays, the Meboso’s main craft is fly-tying, however they continue making their own needles and hooks. Yes, needless to say I was awestruck, and I confess, I bit emotional when I stopped my bicycle outside their shop – should I even call it a shop? My wife and I came inside, and talked for a while with one of the Meboso family members. We had some tea, talked a bit about their history, and I simply admired their history.

The city of Kanazawa is perhaps most famous for three things, the geisha and samurai quarters, a splendid Japanese garden (the Kenrokuen) and its local crafts. Most notably for us anglers fly-tying and rod making, which are officially designated Ishikawa Prefecture Folk Craft (Ishikawa is the prefecture where Kanazawa is located, and is also known as “Kaga”). These “Kaga flies” along with “Kaga rods” are renowned for their history and quality of construction – note, these are not tenkara flies or rods, they are made for a different method of fishing. The Meboso-tied flies and rods can be seen in the Kanazawa Museum of Traditional Arts and Crafts, alongside 500 year old pottery, and equally old silk kimonos. 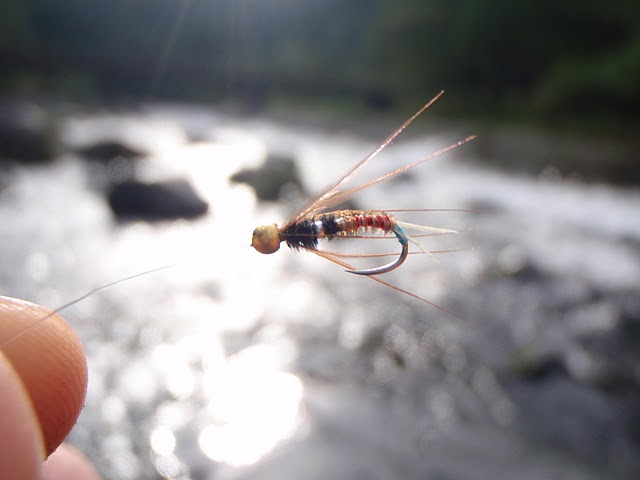 One of over 600 models of Ayu flies, by Meboso Hachirobei

Kaga flies and rods, including those made by the Meboso family, were actually used by Samurai in the Edo period (1603 – 1868). At a particular time in this period, as feudal lords wanted to protect their power, people were not allowed to carry swords or practice martial arts. The samurai found angling to be a good alternative to martial arts training. The samurai also quickly learned they could simply bend a needle, such as those made by the Meboso, and dress it to make a fly. As Yuji Meboso, 20th generation owner of the Meboso shop described on an interview for thePingMag Make website, “Using the fishing rod in place of a sword, the motion of swinging it up and down to cast looked like they were just playing. But for a samurai, walking on the rocky riverside was also good training for their legs and back…. The interesting thing about the Maeda Han samurai was how they used their aesthetic sensibilities to catch fish”.

Flies, known in Japanese as kebari, come in many forms. There are traditional saltwater “flies” for some monster sea fish, then there are ayu flies, and there are tenkara flies.

As you have gathered by now, tenkara is the simpler method of fishing. The emphasis of tenkara flies is not perfect imitation but presentation. Most tenkara flies may not even have a name, but rather are named after the region they came from. And, as you may see on our site, tenkara flies are simple, and perhaps rough or rustic patterns. They are used to attract predatory fish, which will go after food passing by. Thus, the characteristic reverse hackle was devised, some say, to serve as an attracting element of the fly. 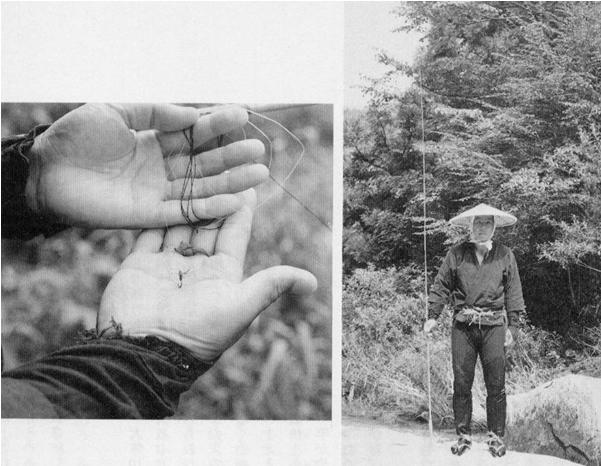 Ayu flies, on the other hand, come in many shapes, really, MANY shapes. Although Ayu may be found in different parts of Japan, the most characteristic comes from the Kaga region and they have a peculiar golden bead head (at the Meboso store, they are actually made of gold!), and many are traditionally barbless since they are essentially made from bent needles. Differently from tenkara, however, there are said to be 700 different types of  ayu flies. While the Meboso shop probably carried about 600 types, most Westerners, including myself, would not be able to tell the differences between one and another, except for color and maybe some minuscule details. Yet, when I asked Meboso-san what his favorite flies were, he readily went to the kebari trays and quickly picked his favorite three. Ayu, the fish, resemble trout, but unlike the trout targeted with tenkara, they do not prey on bugs but rather on algae found in the slower low-land moving streams. I believe these flies were developed to be such intricate works of art not because the fish are picky, but because it was a pastime for samurai, not a means of living as it was for tenkara anglers in the high mountains. If tenkara was inspired by the samurai angling method, it is interesting to note that tenkara flies retained no resemblance to and no significant elements of  ayu flies.

Is this the origin of tenkara?

For a while I bought into the theory that ayu fishing was the predecessor, or at least inspiration to tenkara. When Dr. Ishigaki, a tenkara master from Japan, visited the Catskills in May 2009, he talked about ayu fishing and tenkara during his presentation and we discussed this topic at length for I really wanted to understand the history behind it. His conviction is that tenkara does not come from ayu fishing. Yes, samurai practiced ayu fishing in the low-lands, and they used flies and long rods. However, even though samurai fishing was mostly done at times of peace, and the samurai had a lot of leisure time in their hands, they were required to stay very close to home at all times to be able to protect their lords and villages. Thus, the samurai could never be afforded the luxury of time for a trip (on foot or horseback) to the mountains where they could have shared knowledge of fishing with flies with the mountain folk. Common folk in the lower lands were not allowed to practice this type of fishing and hardly had many interactions with the mountain villages. So, the chances that knowledge of fishing with flies was transmitted from the samurai method of fishing to the mountain streams to serve as inspiration to tenkara are plausible but very slim.

» Tenkara » One of the possible origins...
fly-fishing, history, Tenkara

One Response to One of the possible origins of tenkara, part 1