What we go through to catch trout

“Well, I guess we will find out if the rope is long enough.” 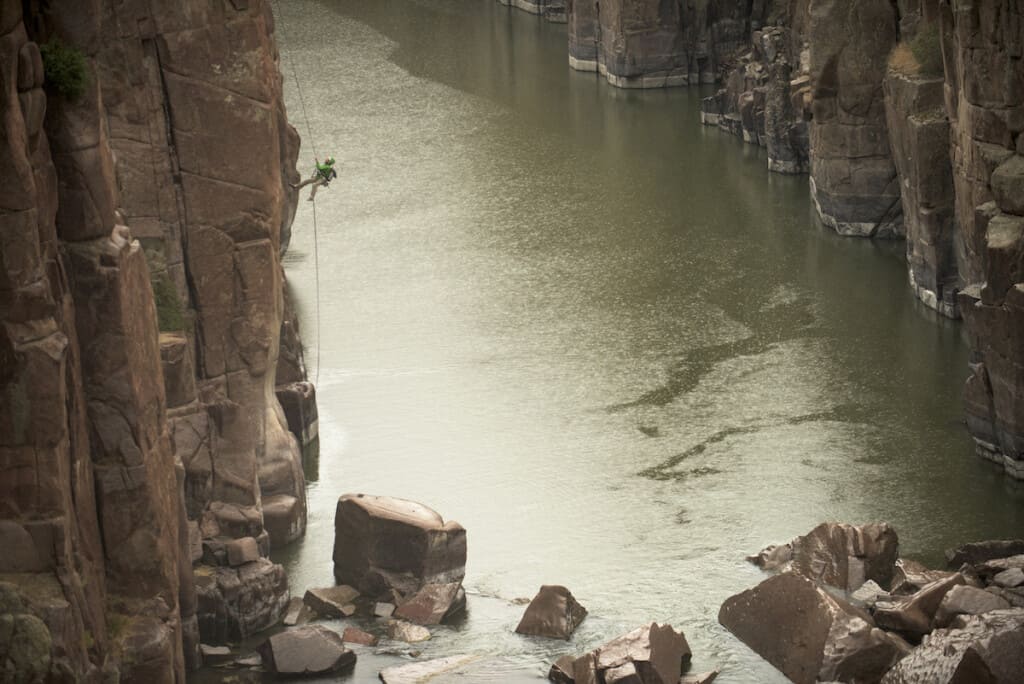 I was standing on the edge of a cliff with Steve Conrad looking at our objective down below, the North Platte River. The fishing is excellent upstream, but we wanted to know if it was even better here, where we imagined no one had ever fished before.

For the fish lazing down below our arrival would be as unexpected as Hannibal’s arrival was to the Romans. Our transport would consist of climbing ropes and rappel devices. The weapons of choice were the tenkara rods we carried in our packs, and which would be quick to deploy. This system was perfectly suited for a stealth invasion.

My rope would allow me to rappel 115 feet, maybe 120 with rope stretch. I had no idea how far down the river was but there was just one way to find out. I threw the rope and in seconds heard the reassuring splash. At least we didn’t risk getting stuck in mid-air at the end of the rope.

Tenkara is often translated from the Japanese as “from the heavens”. Descending into the river like this, the name struck me as particularly appropriate today.

It was probably inevitable that I would have tried this. I have two obsessions: tenkara fishing and rock climbing. And I often try to combine them. Years ago I indulged in what they call “shower climbing” in Japan, climbing and rappelling through narrow river gorges with my tenkara rod, fishing at every promising spot along the way. You can read about that on the 2012 Vol. 3, Issue 3 of this Journal. I have also spent some time exploring canyons in North Carolina, and planning a similar endeavor at a remote and narrow river canyon in California.

None of my previous adventures took me to so steep and committing of a location. The granite walls here were perfectly vertical. Below, there were only precarious perches on scattered and uneven boulders. Unlike fishing in the meadow a mile upstream, which allows us to change locations when the fish in a pool don’t want to take a fly, or to position ourselves to land the large fish, here we were stuck in small little islands. 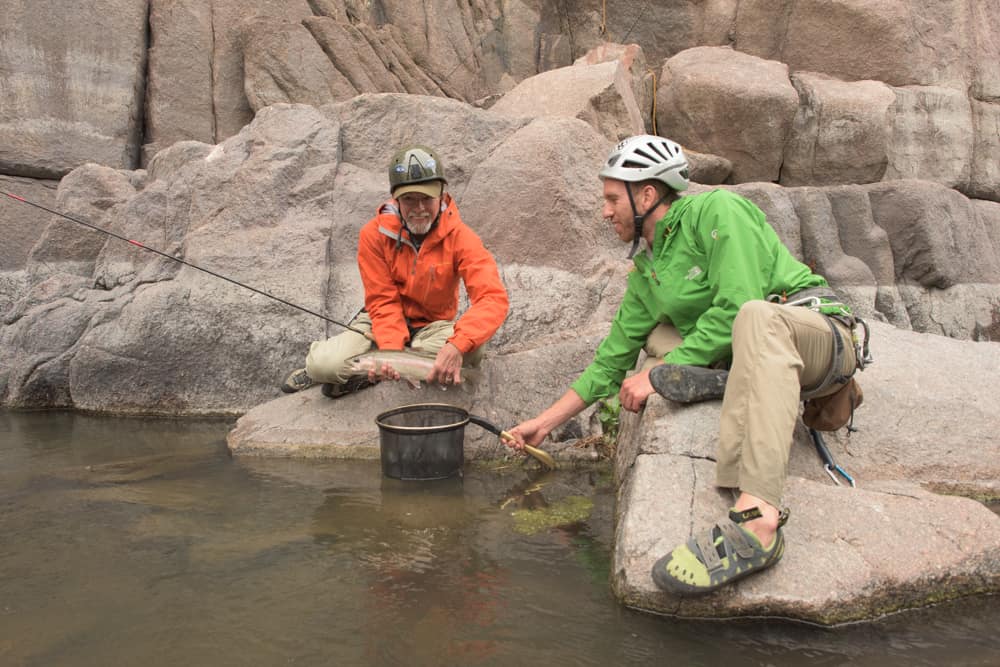 Steve was the first to catch a fish and it immediately became apparent that the fishing here was not an individual sport. Not only would we have to work closely together to stay safe when rappelling and climbing out afterward, but it was devilishly hard to land the fish alone when fishing off boulders in the middle of the rivers. Steve and I were entirely dependent on each other. We scrambled to net each other’s fish. At least once Steve was perched 4ft above the water when he hooked a large fish and I hopped rocks to a location where I could net his fish. Everything about the day was dictated by teamwork.

After catching a few and realizing the splashes and commotion probably put the other pool residents off, our thoughts turned to finding the line of least resistance up the cliff. Without a guidebook to tell us the difficulty grades of different routes, we simply eye-balled the features on the cliff and picked a crack on the rock face to climb. Cracks often offer the easiest way to climb, but make them too narrow or too wide and it can be very difficult to climb them.

We collapsed the tenkara rods, untied the line from the rod tip,and put the kits in my pack. We tied the ropes to our harnesses and started working our way out. Most of the climb was challenging and fun, until the crack turned into an off-width, so called by climbers because they would be climbable if only they were smaller or bigger. Off-widths require special grueling techniques that more closely resemble the way an inch worm travels than anything else. The unexpected off-width probably was strenuous, and took longer than expected to get out. Eventually we arrived at the top of the cliff and could look down at our day far below the rim of the canyon. I wondered how long it would be before someone else attempted to fool those trout.