The 1st issue of the Tenkara Magazine. Published in 2014, the first issue counts on 112 pages of content goodness. 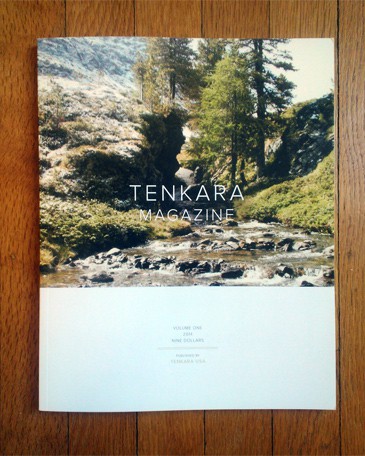 The first issue of the first print publication dedicated to tenkara in the world, the Tenkara Magazine™ is a beautiful collection of essays, interviews, how-to’s, and philosophical thoughts revolving around the tenkara lifestyle. The magazine is 112 pages long, printed in high-quality paper, with submissions from talented writers and photographers who have been practicing tenkara.

We recognize, based on feedback, that the print is a tad small and we want you to be aware of that before purchasing the magazine. The content however is very solid.

TABLE OF CONTENTS:
Beginnings: A Japanese Story by Paul Gaskell
Tenkara: Me and the Past by Gordon M. Wickstrom
Taking a Chance by Daniel Galhardo
Home by Dinner by Graham Moran
Arctic Grayling Ultralight Tenkara Backpacking in Utah’s High Country by Rob Worthing
A Gal Who Loves to Double-Haul by Aileen Lane
Q&A with Dr. Hisao Ishigaki and Masami Sakakibara by Adam Trahan
I Love the No-Tarin Club by Kiyoshi Ishihara
The Tenkara Summit by Daniel Galhardo
Tenkara and the Beginner by Tom Davis
Ten Techniques for Tenkara by Jason Klass
Finding the Perfect Tenkara Water by Steven B. Schweitzer
Forgiving Boulder Creek by Sasha Barajas
The Basics of Tenkara
The Guide School by Mark R. Cole
Tenkara Guide Network by Daniel Galhardo
Tenkara Brothers by John Vetterli
A Homecoming by Paul Vertrees
A Great Way to Catch Trout by Morgan Lyle
Tenkara Fly Tying: Sakasa Kebari by Chris Kuhlow
Tenkara Flies by Daniel Galhardo
People Who Fish by Tienlon Ho
Small Streams: There and Back Again by Anthony Naples
From the Heavens to the Peak District: A Short History of the
Rise of Tenkara in the UK by John Pearson
Under the Ruins of Nero’s Villa: Tenkara in Italy by Vito “Tsurikichi” Rubino
A Boy, A Bus, Tenkara! by TJ Ferreira
No Need to Choose by Allison Pluda
Uptown Tenkara: A Crappie Experience by Ron P. Swegman
Gyotaku from the Water, to the Paper, to the Plate by Kirby Wilson
Destinations by Adam Trahan, Paul Vertrees, Daniel Hoda, Rob Worthing, Judy W. Cole, and Guillaume Chavanne
The Colors of Tenkara by David Dirks