Rob guides Tenkara anglers for Rainbow and Brown Trout on the Lower Mountain Fork River in the Kiamichi Mountains of Oklahoma and for warm water species on a variety of lakes in East Texas. 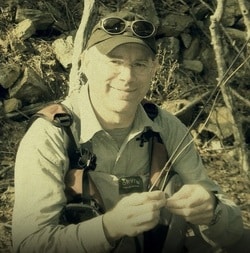 Rob Woodruff is one of the first tenkara guides in Southeastern Oklahoma and Northeast Texas. He has been an avid fly fisherman since the age of ten and began guiding fly anglers in 1992. Rob has a degree in Entomology from Texas A&M University and frequently teaches Entomology for Fly Fishers classes. In 2011 a desire to try something new led him to purchase a Yamame from Tenkara USA. The simplicity of the method and his success catching Trout on his initial Tenkara excursion prompted him to begin researching and tying traditional Kebaris and learning more about Tenkara. In addition to his home waters, Rob has also taken his Tenkara rods to northern New Mexico, the Texas Hill Country and Belize.

He guides Tenkara anglers for Rainbow and Brown Trout on the Lower Mountain Fork River in the Kiamichi Mountains of Oklahoma and for warm water species on a variety of lakes in East Texas.