An excerpt from tenkara - the book

The most appreciated tenkara tip we share with people might also be the shortest and simplest.
When we are learning how to cast with tenkara, it is common to occasionally have the line tangle up with the rod itself. This will continue happening even with experience under your belt, but it will happen way less frequently after some time. The main reasons for this are:
1) Waiting a bit too long on the backcast, which allows the line to start falling, and then when you do your forward cast, the line will hit the rod. So make sure you move from back cast to forward cast almost instantly when you stop the rod on the back cast.
2) Moving the arm either forward when you cast (and sometimes sideways). Keep your arm relaxed close to your body, pivoting at the elbow and with some wrist when it feels natural. But, do not move the whole arm forward. Doing that will usually make the tenkara line hit the rod and tangle up.

When the inevitable happens and the line tangles up with the rod. Just STOP! And, then point the rod up!
This will, in the great majority of times (like 9 out of 10 times), let your line slide down the rod toward your hand, at which point you can just pull it free and resume casting. 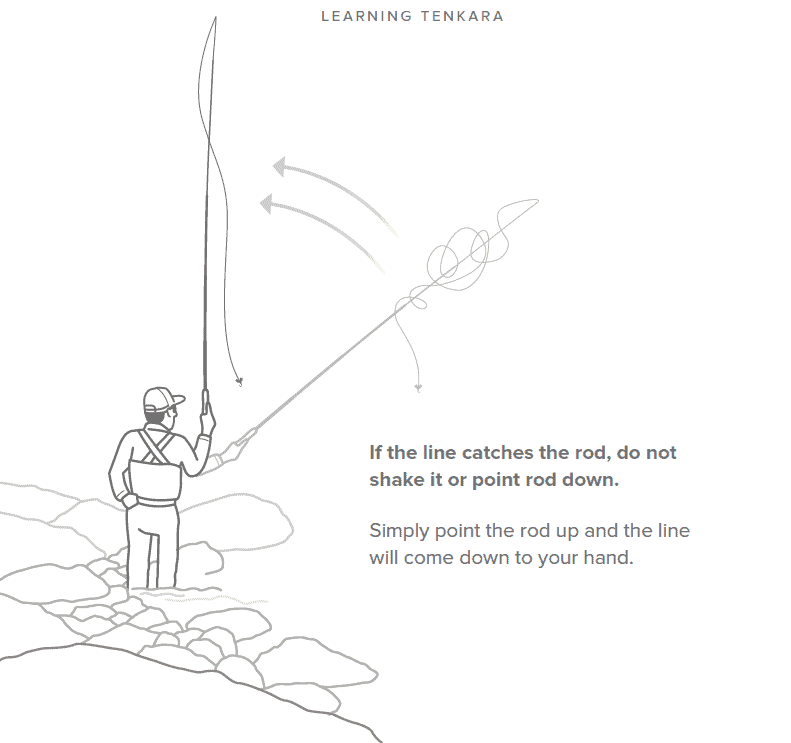 For some reason I can not figure out, the vast majority of people instinctually do exactly the opposite of this. Once they notice the line tangling up with the rod, they will point the rod down toward the water…and, to make things way worse, they will shake it. This instantly creates a big mess that is hard to free up.
If you stop, and point the rod up, the line will come to you with the fly. And, if it doesn’t, at least it won’t get any worse. And, at this point just collapse the rod and work the tangle free with the rod collapsed under your arm.