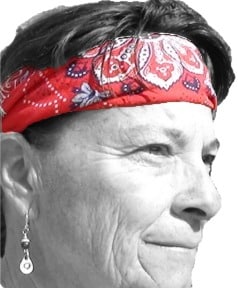 Michele is the owner of Tumbling Trout. She is a retired geologist and a published author (under the name Michele Murray).

She’s been float fishing in a dory for 18 years with her husband. They regularly float fish and wade the great rivers of the west, primarily in Montana and Colorado. Michele learned the Tenkara method of fly fishing from Tim Hill and Mark Cole through the certification program at Colorado Mountain College in Leadville. Tenkara is now her primary rod for personal use and she always bring one along when guiding with traditional fly fishing gear, in order to demonstrate and introduce anglers to this method.

Her home river for guided fishing is the South Platte River in South Park as well as its tributary, the Tarryall River. The South Platte River in South Park is a fly fishing destination venue with gold medal tailwaters below Spinney Mtn. Reservoir (the Dream Stream) and in Eleven Mile Canyon (below Eleven Mile Reservoir). The riparian character of the South Platte in South Park is high alpine meadow with oxbows and meandering channels through wild hay fields with riffles and under cut banks lined with grass or willows. There is a great mixture of trout species and non-native “bucket biologist” contributions in the South Platte, such as pike, carp and even yellow perch can be found in the stream since Antero Reservoir (upstream of Spinney) was drained in 2015.

Tumbling Trout takes Tenkara clients to fish the delicate oxbows of braided meanders at Tomahawk – a braided system of narrow but deep channels with beaver ponds and long cobble riffles high in the South Platte’s feeder waters. There is also good tenkara fishing on Tarryall – which is a knee high small mountain stream with deep pools and long runs through grass lined hay meadows. The best opportunity for Tenkara users is to approach a trout lair at an oxbow and target a hole on the opposite side of the river or play a trout that is feeding behind boulders in the stream using both traditional Kebari flies and non-traitional patterns. For more information, contact Michele, mwhite@tumblingtrout.com