Quite sometime ago we talked about the beginnings of a fascinating film project, the Manzanar Fishing Club. This project documents the stories and history of Japanese and Japanese Americans who were imprisoned at the Manzanar internment camp (Eastern side of the Sierra Nevada) but would risk their lives to sneak out of the camp and pursue freedom in some moments of fishing.

We’re happy to share that the film has been completed and is opening soon in several theaters. I had the pleasure of watching a pre-opening showing a couple of months ago and it is a touching story that is very well told by the film-makers and those who tell us their personal stories. 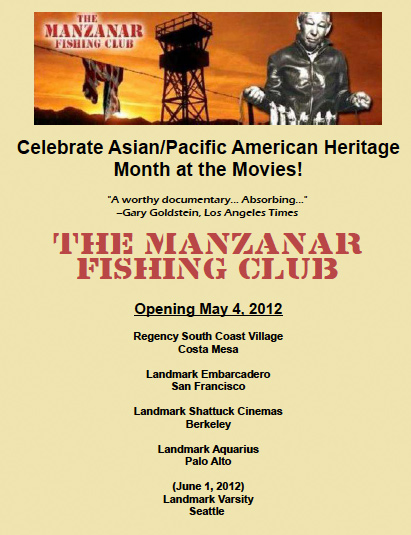 The angler pictured above was an angler from Japan who would disappear for days at a time to go fishing in the mountains nearby. In this particular stance he was gone for 2 weeks, leaving the camp with absolutely nothing on him, and for 2 weeks surviving off the harsh terrain of the Eastern Sierras. The fish he proudly displays are golden trout, which were only found miles and miles away from the camp.

We will never know whether he, or anyone else who suffered the injustice of being imprisoned, was aware of tenkara or not. It is actually irrelevant. If tenkara really means from heaven, then I’m certain they practiced their tenkara. Those who fished outside the camp found their tenkara, their moment of freedom and their gift from heaven, on the streams on the other side of the barbed wires.