Kotsuzake, a “ceremonial” cup of sake

Over two years ago my friend Masaki and I went fishing together to shot the first video for this website. It was then that I was exposed to my first glimpse of a rich tenkara culture, and a part of it that has become some kind of a ritual in my outings: kotsuzake, a drink which requires only sake and the lightly charred bones of an eaten fish.

Kotsuzake, to me, is underpinned with ceremonial and philosophical significance – though you should not picture a tea ceremony here. It is primitive and raw. The bones of the precious trout, after being separated from the meat, are placed over the coals of the fire and lightly roasted to bring out oils and flavor, after which they are immersed into the warm sake. The result is sake with subtle and tantalizing fish flavors, and a practice that is a personal routine if I must eat a trout that I catch.

The only way I ever prepare trout nowadays is with a simple coating of sea-salt over its skin, what is called “shioyaki” (or salt-grilled). The trout is skewered firmly, with a skewer never puncturing its flesh until the end. The absence of other seasonings, only salt enhancing its flavor, and the skillful use of a skewer preserving the integrity of its flesh are the best way to honor its meat. 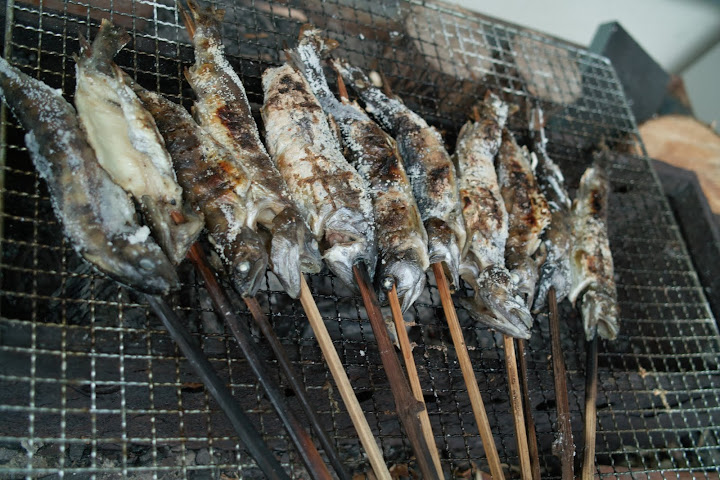 Small trout from a fish-farm in Japan, lunch for 5.

Kotsu means “bone”, zake is just a modified version of “sake”. However, while the traditional drink, and even the drinks’s name imply the use of the bones only, another common way of drinking it is to use the entire fish, cooked, and submerged in sake. The correct name for that being “Iwanazake“, after the fish more commonly used for such a drink the Iwana. I have not yet tried this way of drinking it, thinking of it as a waste of trout.
In the mountain areas I spent time in, kotsuzake made this way (whole fish) is somewhat a staple. In a few local farmers’ markets I even found the neat prepackaged kotsuzake sets of the picture below. The package on the left side contained a piece of hollow bamboo that would serve as a cup along with a dried Iwana. The instructions illustrated heating the fish, putting it in the container, and finally pouring sake over it. The one of the right, I have no idea, I gave it to a friend as a gift. It looked like a cup with pieces of dried Iwana, not the entire fish. When shaken, it rattled. The package was neat, a good souvenir. 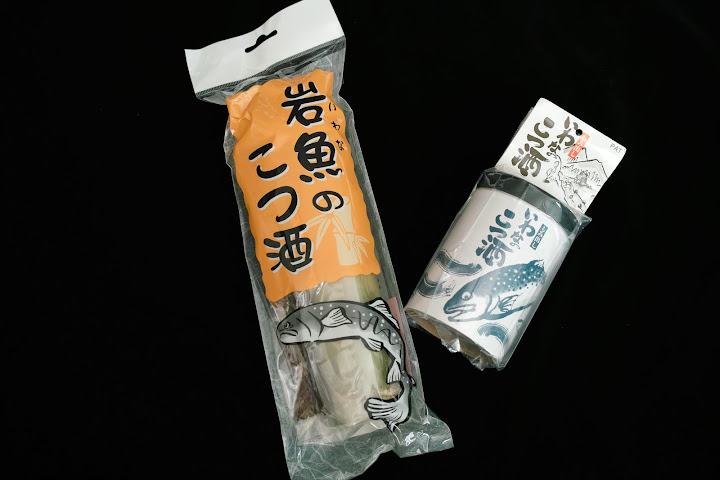 Preparing and drinking kotsuzake, is an act of homage to the principle of not wasting the resources that nature provides. I wish I had a better, cleaner picture of kotsuzake. The image below, in contrast with the sterile packages above, will automatically make you think “disgusting!” As I said, it is primitive, particularly when done stream-side. However, do not be taken back by it, it tastes much better than it looks. The ritual feels even better. 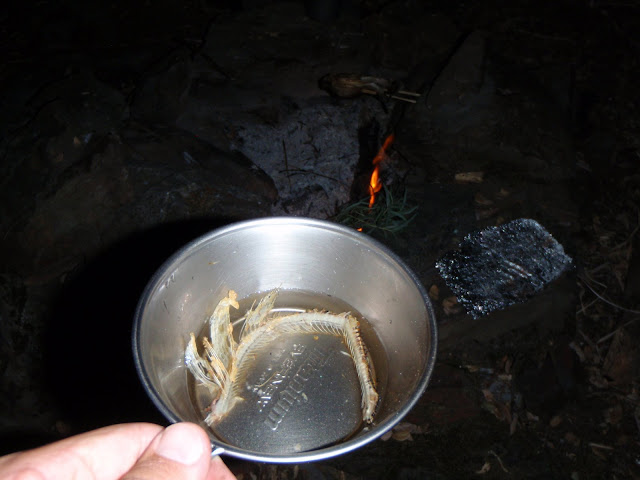 10 Responses to Kotsuzake, a “ceremonial” cup of sake