By the title of this post, you know there is something disgusting to come, and I’ll save that for the end. The last couple of days were very enjoyable, with some great experiences. A bit too much for a single blog post, but I want to stay on top of it and write as the memory is fresh. We are going fishing for ayu in about 20 minutes (if the rain stops, that is), so please forgive any errors. And, by the way, there are pictures of fishing at the end.


The main plan for yesterday was to meet with a renowned rod maker. We started our trip early as Dr. Ishigaki mentioned he wanted to show me a fishing store in the area we would be visiting. Visiting this second fishing store was certainly worth the stop. As we parked the car, it was instantly clear this was a fishing store. There were fish prints everywhere on the windows. Upon closer inspection I realized they were all gyotaku prints. If you’re not familiar with gyotaku here is a good introductory post. 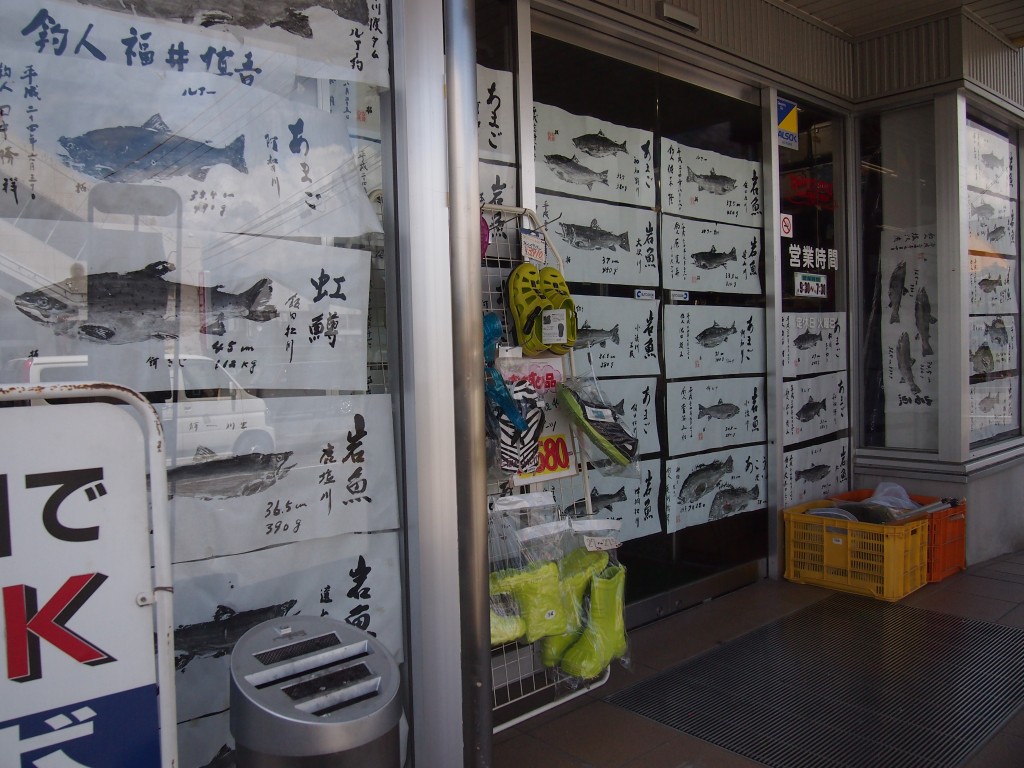 I wondered what that was all about. Was it from customers trying to show their catch in an artistic way (similar to the fish photos we may see in stores elsewhere)? Were gyotaku particularly popular in this area? There were dozens and dozens of them (probably the low hundreds) and the inside of the store was adorned with more of them. While the outside featured gyotaku prints of trout and ayu (a local species of fish), the inside had larger fish such as tai and tuna, printed on beach-towel-sized paper. I didn’t think much about it and went on to browse all the cool things they had there, a great variety of hooks for ayu and tenkara, as well as ayu rods, and of course their tenkara rods. Margaret, not as interested as I am in all the fishing tackles, started a conversation with an older man who worked at the store. Soon she learned he was the person behind each one of the gyotaku prints we saw. His name is Akira Yokota. 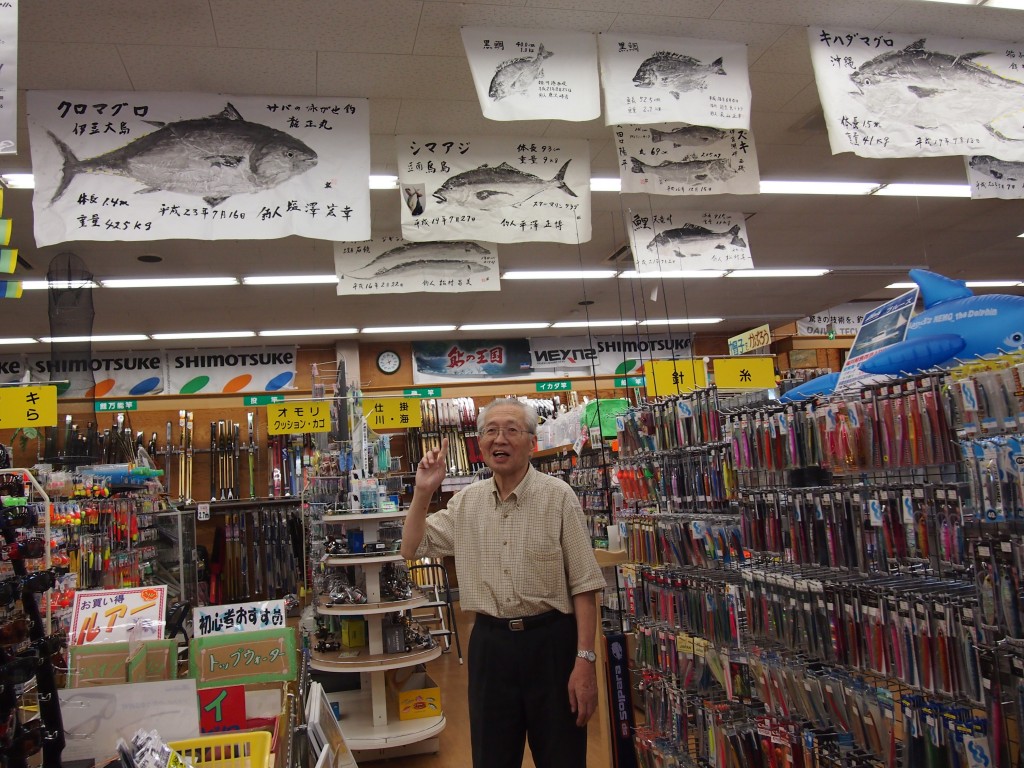 I should probably have asked more questions – such as how long he’s been doing it – regretfully I didn’t. But, we did learn that customers from the region came to him with their fish in hand to record their catch and that a couple were caught with tenkara. It is, after all, similar to how we see pictures of fish on the walls of fishing stores elsewhere – just a little different.

The second part of the day was the meeting with a rod maker and his staff. The meeting was very productive though I’ll have to save you from that boring stuff. The real exciting part happened about half-way through the meeting. I saw the rod maker stepping out of the room and coming back with a tenkara rod in his hand. As I was engaged in a conversation with the rest of his staff, I didn’t pay any attention to it. Until, out of the corner of my eye, I caught a glimpse of a couple of unique features of the rod. I recognized it instantly.

A couple of months ago I was visiting Montana (and fishing of course) and learned the FFF museum in Livingston had a couple of tenkara items in their exhibit. Obviously that became a mandatory stop. There it was, a full tenkara set of rod, line and flies, hanging on the wall. Here’s a picture of the set. 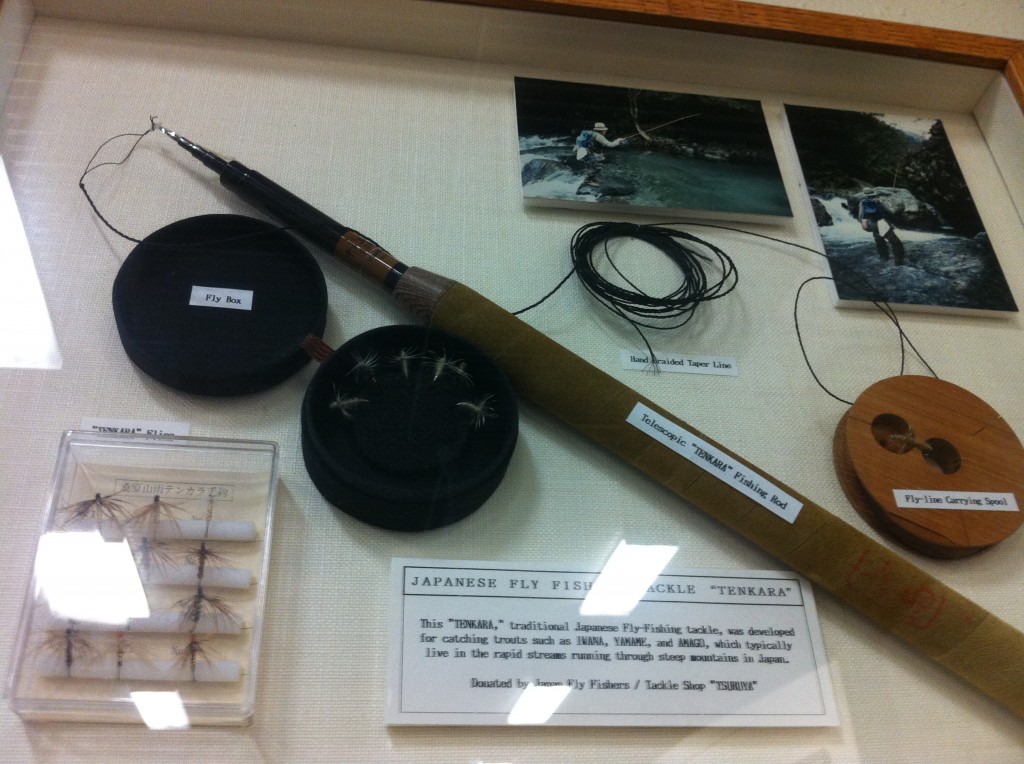 This was a very unique rod, with wooden ends on the handle area, and a leather-wrapped grip. It was also a short rod when collapsed. And, thus I recognized it easily and quickly.

I stopped in my tracks: “Ohhhh! I know this rod! Have you been to Montana?”. It turns out he had and that was the exact same rod! I pulled my cell phone out to show him the picture above. Needless to say he was happy to see that image. Unexpectedly he said that he brought the rod in because he wanted me to have it.He never expected such dedication to a method of fishing that most Japanese do not know about to come from the US. It was a esteemed rod to him, about 30 years old. He said he was planning to eventually give it to Dr. Ishigaki, but, especially after I showed him the picture, he thought I should have it. I am not sure what I will be able to do to thank him. This was a super special gift, he has no idea!

What are the chances?

The other highlight of day 3 was our dinner. In what is becoming a regular point of homage in my trips to Japan, we visited the Maruhachi ryokan. It is always a feast there and the ambiance very pleasant. This was Margaret’s first time and I was excited to finally bring her over. I could say the dishes even tasted better because of her presence, but the addition of “Uruka”, a.k.a. fermented ayu (fish) intestines to the menu may diminish the truth in that statement.

Ayu, a.k.a. “sweet fish”, is a type of fish found in the streams of Japan (as well as Korea, China and Taiwan). It’s a delicious fish and very prized for its delicate meat, with a subtle, and some say slightly sweet flavor. The ayu graze on algae that grows on rocks, and its guts are thus edible (some even think of the guts as a delicacy). Typically Ayu are cooked shioyaki-style (sea-salt coating the skin and roasted) and every part of it can be eaten.

Just when I had grown accustomed to eat natto (fermented soybeans, and ubiquitous in Japan) I am presented with something even gnarlier:  fermented ayu intestines (uruka). Uruka is very rare and considered to be one of the top 3 most prized delicacies (“chinmi” – delicacies) in Japan. Yes, hard to fathom, I know!  It was not nearly as bad as it sounds (I know it sounds VERY VERY BAD). It was very salty (shopai as Margaret says at the end of the video), and if I had to describe it I would say it was like oyster with lots of salt… and certainly not as appetizing.

Well, to finish on a more “appetizing” note, there is some fishing too! It has been very hot here, hovering in the 90s with super-high humidity. So, Dr. Ishigaki and I decided to have an early start today: 4:30AM. The river was right next to our ryokan and we only had to drive a few minutes to the spots we wanted. But the early start proved to be crucial – though not in terms of fish, he and I only caught one each between 5:00 and 7:00.

Here are a few images of fishing this morning on the Mazegawa and then one of the tributaries: 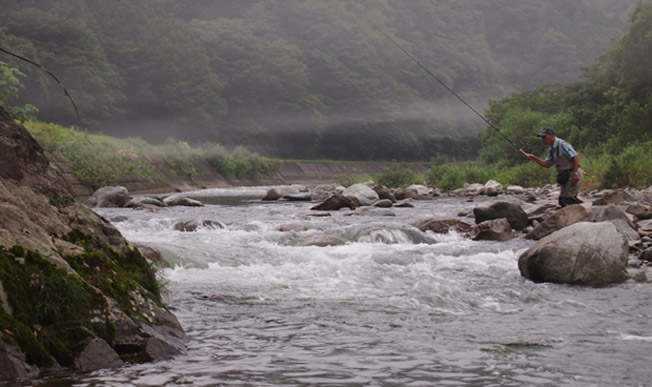 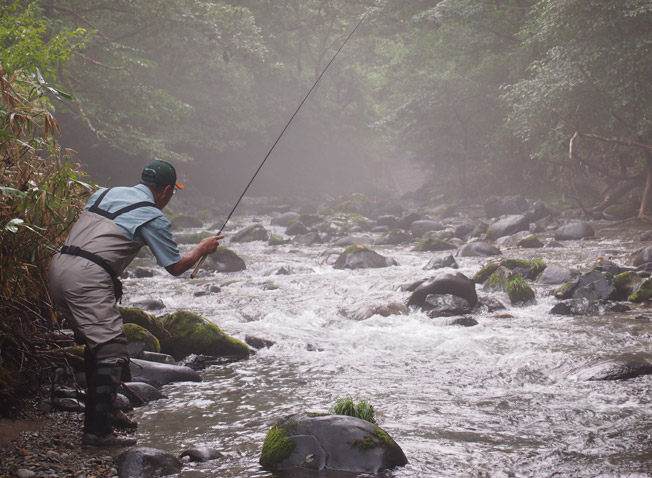 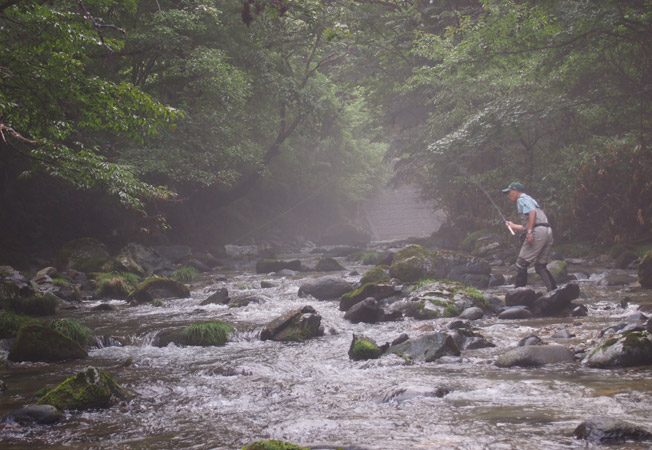 We didn’t catch this one, but here is a recent Iwana taken out of the Mazegawa and put in the Fishing Center’s aquarium, what a way of raising hopes of poor anglers. It certainly makes me want to go fishing early tomorrow. It was roughly 20 inches long. 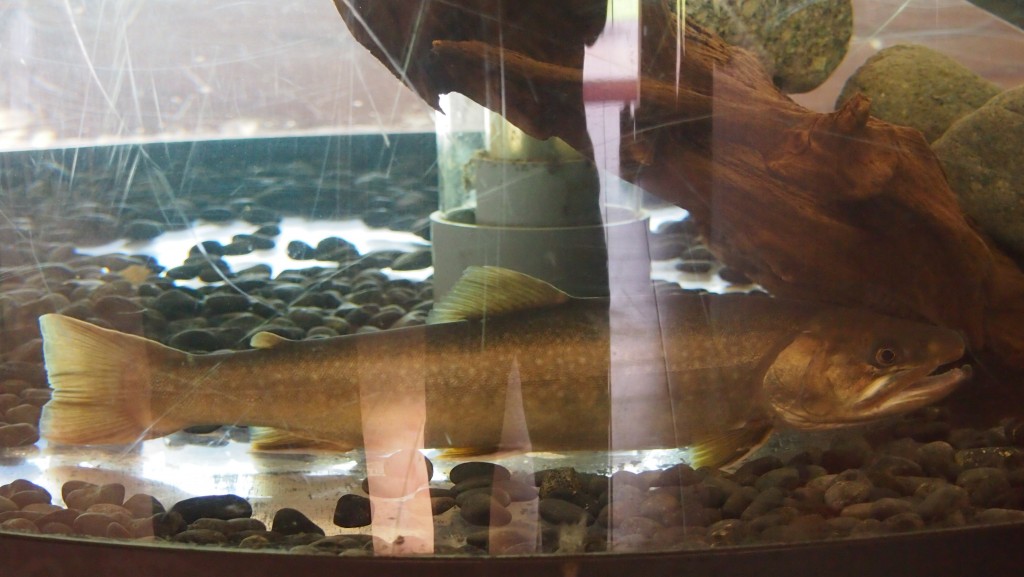