Even those who really like Japanese food and enjoy eating slices of raw fish, known as sashimi, are often surprised to learn that trout can also make awesome sashimi. This includes people from the big cities of Japan, who are accustomed to eating sashimi from ocean fish. This picture was taken soon after I arrived in Japan in May, and the two friends from Tokyo that accompanied me were trying iwana (Japanese char) sashimi for their first time. I had eaten iwana as well as amago sashimi before, and was in agreement when they said it was their new favorite sashimi. 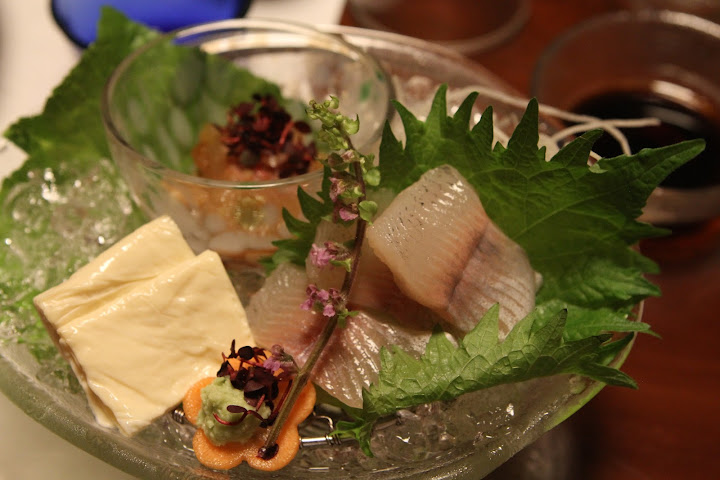 In the mountain areas of Japan, where trout are raised in farms with cold and very clean water, residents have access to some of the best sashimi anywhere. Iwana, a Japanese char, is the preferred fish for sashimi as it is slightly fatter. Other trout, such as Amago, can also be used and are delicious to eat as well, but their leaner meat has slightly less flavor. In fact, the availability of trout in these areas, and the long distance a sea fish would have to be carried to be served, also make trout sashimi the preferred option in more isolated mountain regions of Japan.

I do wish I had the opportunity to enjoy freshly caught sashimi on the stream-side. But near the end of my trip, when the opportunity did arise, I was feeling very bad with the idea of eating even one of the few wild trout left in Japan. Fishing had been poor, primarily because the idea of catch-and-release is still not a normal part of the culture, and I certainly preferred not to contribute to the diminishing stock of fish in the streams. I wonder, however, how often the professional tenkara anglers of old times enjoyed uncooked, fresh iwana and amago sashimi to nourish their bodies during a day of hard fishing.

The leaf below the slices of fish is the shiso leaf, a mint-like leaf often eaten with sushi and sashimi. I actually have been growing shiso at home for a few months as it is a bit expensive to buy, but very handy when my wife and I make sushi at home. The flower stem on the left of the slices of Iwana are the shiso flowers. The small petals were taken out and placed on the small tray of soy sauce for added flavor.